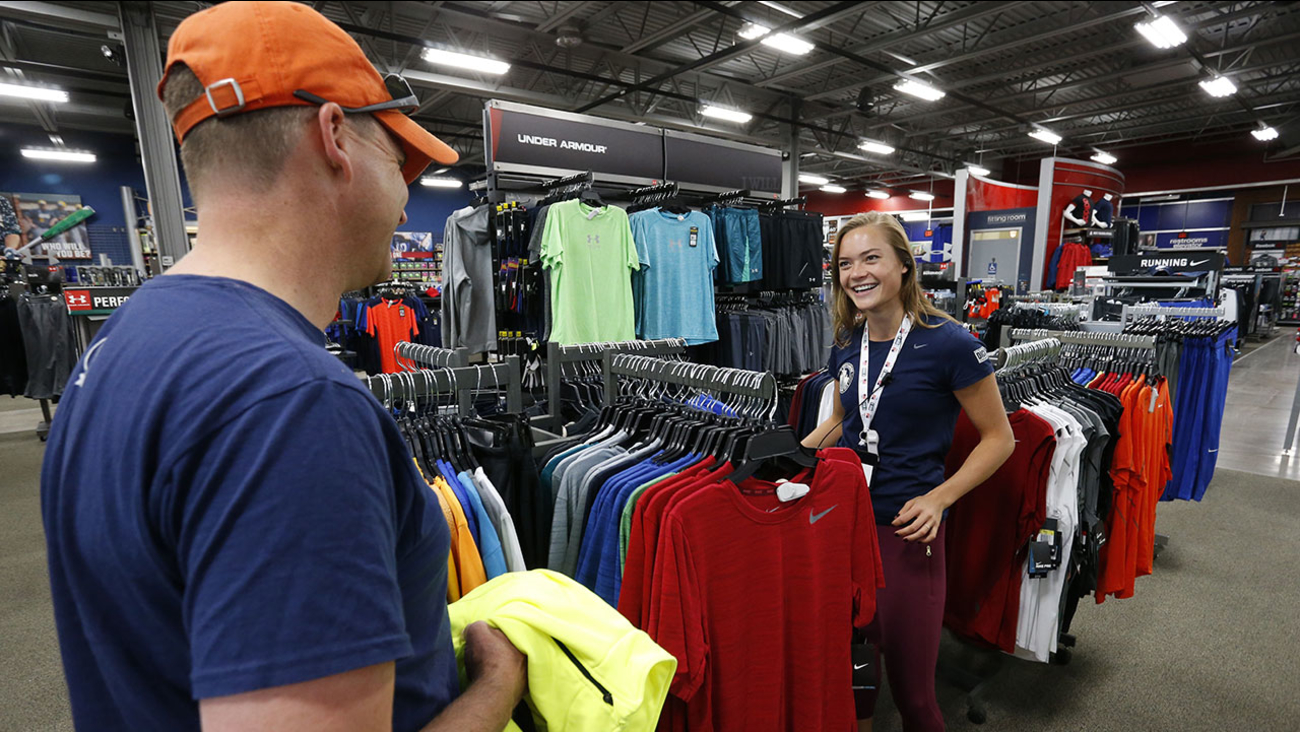 Olympic pentathlon hopeful Isabella Isaksen helps a customer inside Dick's Sporting Goods, where she works when not training at the Olympic Training Center.

COLORADO SPRINGS, Colo. -- The fencer worked as a barista. One martial artist drove a prison truck, and the other went door-to-door selling pizza coupons. The paracyclist was also a starving musician. And as if five sports didn't keep the modern pentathlete busy enough, she also worked part-time at a clothing store.

One of the overlooked realities for Olympic hopefuls in the United States is that, in addition to grinding through a six-day-a-week, eight-hour-a-day training schedule, they also have to follow this well-worn piece of advice: Don't quit your day job.

As of this month, Dick's Sporting Goods has filled that need for 100 of these athletes, most of them trying to stay on the road to Rio and the Summer Olympics next year. Through a new sponsorship deal with the U.S. Olympic Committee, the store is offering athletes 20-hour-a-week jobs on schedules that defer to the steady training and travel regimens these potential Olympians must manage.

The athletes work at 58 stores covering 25 states, and Dick's is willing to be flexible with their schedules not only to help support the Olympic movement but also because of the expertise these elite athletes can provide to customers in search of the perfect shoes, swimsuit or workout clothes.

"You compete at a high level because it's what you love to do," said Andras Horanyi, the fencer who lives at the Olympic Training Center in Colorado Springs and works at Dick's. "I don't think most athletes are doing this because they make a ton of money."

True, but for most Olympic hopefuls, there's a big gap between getting rich and making ends meet. And yet it still takes considerable resources to get to sport's highest level - resources that go beyond the room-and-board and many of the training stipends the USOC and the individual federations provide to the top Olympic hopefuls.

For instance, in almost every sport, each athlete must pay his or her own way to domestic competitions, including national championships, which is often where they compete for rankings and spots on the U.S. team that lead to more crucial funding.

That's how Horanyi found himself working as a barista and juggling a fencing schedule when he was living in New York a few years back. After moving to Colorado Springs, where a room at the training center allayed many of his training and scheduling problems, he worked for a while at eBay and then as an events planner for the USOC.

"That was a good job, and they understood my needs, but it was only a few hours a day," Horanyi said of the USOC job. "It didn't pay enough for the tournaments and stuff like that."

The stories for other Olympic hopefuls are similar, almost across the board, and almost regardless of sport.

For every Michael Phelps there are a dozen athletes like judoka Ella Graves, who, before her job at Dick's, worked at a college library and also walked the neighborhoods in Colorado Springs selling pizza coupons.

And for every Nick Symmonds - the runner who boycotted this year's track world championships to make a point about the relationship between athletes, sponsors and Olympic sports - there are dozens more like Josh Brown, the judo athlete whose sponsorships are small, and who once worked a night job driving a truck for a correctional facility program.

"When I got the job as a driver, they didn't tell me I'd be driving a bunch of felons around," Brown said. "I'd get off at, like, 1 a.m., but you can't go home, relax and get ready to fully train after working a job like that."

Paracyclist Chris Murphy was good with the trombone. "The starving musician thing is a real thing," he said.

His sports dream started coming together when he bought a bike to shuttle himself from job to job in Southern California. As he moved into the elite circles of the sport, he realized the commitment he had to make to train - both in hours and money - didn't jibe with a job that paid a lot per hour, but didn't provide steady or consistent work.

Modern pentathlete Isabella Isaksen, whose older sister, Margaux, made the 2008 and 2012 Olympics in the same sport, estimates she spends 40 to 50 hours a week training in her five disciplines: running, swimming, fencing, equestrian and pistol shooting.

She said she jumped at the Dick's job because of the flexibility they offer and the team atmosphere.

When an American athlete turns to judo, or fencing, or modern pentathlon, she learns at an early age that the prospect of going for gold does not mean a bankrolled ride to the top. That's unlike the case in many countries, where governments finance sports ministries that send the money to the sports federations and the athletes.

Graves remembers crisscrossing the parking lot at St. Louis Rams games with her brothers and sisters, hitting up tailgaters for money to help foot the bills for her training and competition schedule. The rest all did fundraising efforts of their own, mostly involving writing up fliers and going to businesses, looking for donations.

They found a lot of enthusiasm, some generosity, far fewer long-term answers.

"I went everywhere and told people my story," Brown said. "They were all very impressed and surprised and thought it was awesome. But that's where it ended."

The Dick's program replaced a similar one run by Home Depot for 17 years before the long-term sponsorship deal between the big-box store and the USOC lapsed in 2009.

There are similarities between the programs, though the Dick's program adds a few things - namely, an easy-to-define connection to sports, along with training equipment the company gives to the Olympic Training Center.

Those uniforms, training shoes and bicycles do not materialize out of thin air, even for Olympic hopefuls.