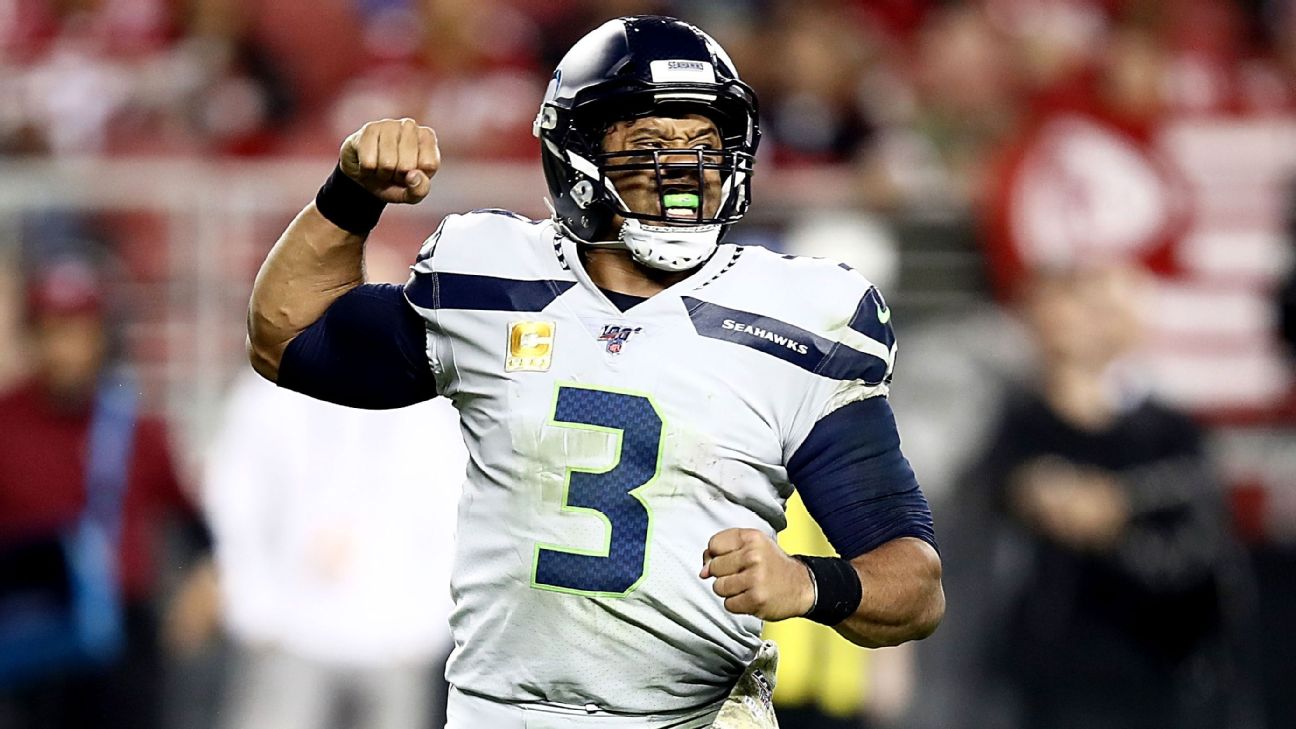 The NFC West playoff race got a little closer on Monday night when the Seahawks hit a game-winning field goal in overtime to move to 8-2 on the season.

Let's take a closer look at the playoff race through 10 weeks of the 2019 NFL season.

The Patriots emerged from their bye week with a one-game lead in the race for home-field advantage throughout the playoffs, though the Ravens hold the head-to-head tiebreaker if it comes to that. Now comes the Pats' opportunity to earn that top spot. After playing the NFL's easiest schedule to this point, according to ESPN's Football Power Index (FPI), they'll now face four consecutive playoff contenders, starting with the Eagles in Philadelphia in Week 11.

Next up: at Philadelphia

It would be difficult to find a team that has played better over the past month or so. The Ravens decisively defeated the Seahawks and Patriots by a combined 31 points, and on Sunday they destroyed the Bengals to such a degree that quarterback Lamar Jackson got the fourth quarter off. The Steelers' surge will at least keep the Ravens honest in the AFC North, although they are a full two games ahead and already have won one of the teams' two regular-season matchups.

Next up: vs. Houston

The Texans got an unexpected boost in the division during their bye when the Colts lost a home clunker to the tanking Dolphins. That put the Texans ahead by a full game. Week 10 also made clear that the Titans aren't going away, either. Regardless, the Texans need to be sharp as they return this week. They have a brutal stretch upcoming with consecutive games against the Ravens, Colts and Patriots.

Next up: at Baltimore

The Chiefs navigated Patrick Mahomes' knee injury only to ... lose upon his return? It happened Sunday in relatively freaky fashion, courtesy of a pair of fourth-quarter miscues by their field goal unit. The Chiefs' 35-32 loss to the Titans tightened the AFC West considerably. The Raiders have closed to within a half-game and will travel to Kansas City in three weeks. In between, the Chiefs have a must-win game next Monday night against another division rival, the Chargers. Kansas City has lost almost all of its wiggle room in what once seemed a weak division.

Next up: at L.A. Chargers

It might be time to ask if the Bills are a playoff team or one that has simply cleaned up against a really easy schedule. The combined winning percentage of the opponents they've defeated is .214, the lowest of any team with at least one victory in the NFL. They looked pretty bad against the Browns on Sunday, but fortunately for them, the Colts' loss in Miami allowed the Bills to hold a relatively strong spot in the AFC race.

Next up: at Miami

Well, well, well. Tomlin has remade the Steelers on the fly, behind a swarming defense and two quarterbacks (Mason Rudolph and Devlin Hodges) who had no real experience entering this season. The defense alone, fueled in part by newcomers Minkah Fitzpatrick and Devin Bush, appears equipped to keep the team in playoff contention. For the moment, the Steelers stand above the rest of the 5-4 field because they have a better conference record than the Raiders and they have a head-to-head victory over the Colts.

Next up: at Cleveland

The dream died Monday night. Frankly, the 49ers were fortunate to get into overtime against their formidable divisional opponent. (The Seahawks dropped two interceptions in the game-tying drive that led to overtime.) The biggest consequence of the loss, other than the pride of an undefeated season, is that the 49ers missed a chance to take a commanding lead in the NFC West. Had they won, according to FPI, they would have had a 96% chance of winning the division. Their chances still stand at 75%, but they might need to beat the Seahawks in Seattle in the regular-season finale to do it.

Next up: vs. Arizona

The Packers rarely make it easy; their plus-45 scoring differential is the second lowest among the eight division leaders. But they rebounded from their Week 9 loss to the Chargers with a tough win over a Panthers team that looks good enough to ascend into the playoff picture at some point. As the Packers enter their bye, all goals are within reasonable reach, including the NFC North title and the No. 1 overall seed.

Next up: at San Francisco (after the bye)

Deep breaths are necessary in New Orleans. Yes, Sunday's home loss to the Falcons was perplexing and eye-opening. But in the big picture, the Saints remain firmly in control of the NFC South and are still in the conversation for the top spot in the conference. Their schedule sets them up to follow that path, with three consecutive division games followed by a Week 14 game against the 49ers at the Superdome.

Next up: at Tampa Bay

A Sunday night loss to the Vikings ate up the rest of the Cowboys' breathing room in the NFC East. They still own the division lead over the Eagles by virtue of their Week 7 victory in the teams' first matchup of the season. And there is still time to galvanize in the second half. But short of that, the Cowboys are having one of the NFL's most vexing seasons. Are they the team that started 3-0? Or are they the team that has gone 2-4 since? There isn't a ton of time left to find out.

Next up: at Detroit

Monday night's epic win kept the Seahawks in contention for the NFC West title and set up what could be a monster Week 17 rematch against the 49ers in Seattle. Still one loss behind the 49ers, the Seahawks have their work cut out for them. FPI gives them a 25% chance to win the division. But a loss would have given them almost no chance, and fortunately for everyone, we don't have to figure out the impact of a tie. Just as importantly, the Seahawks' upcoming bye will allow them to recover from a three-hour, 49-minute game that included a combined 153 plays between the two teams.
Next up: at Philadelphia (after the bye)

We shall see if the Vikings' victory Sunday night in Dallas was a signature win against a playoff team, or one against a team that started hot and faded down the stretch. Regardless, the Vikings should have a pep in their step after quarterback Kirk Cousins won his first road game in prime time since Dec. 26, 2015. Their schedule gets a bit more favorable for the next few weeks, with home games against the Broncos (3-6) and Lions (3-5-1) sandwiched around a trip to Seattle.

Next up: vs. Denver 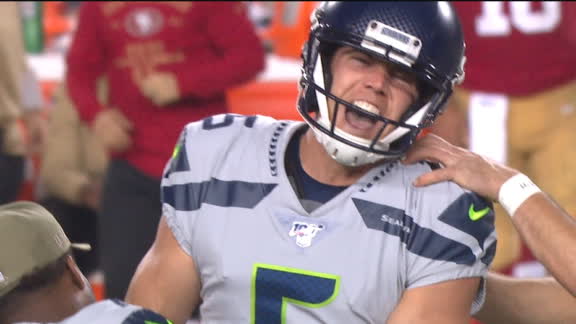 Myers is money on game-winning FG in OT
Jason Myers' 42-yard field goal as the overtime clock expires squeaks through the upright to hand the 49ers their first loss.

Clark: Chiefs' defense is failing Mahomes
Ryan Clark analyzes the real issue behind the Chiefs' loss to the Titans and how this isn't the first time the other side of the ball couldn't save Patrick Mahomes. 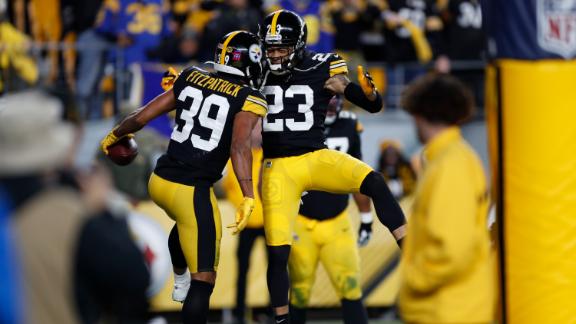