49ers' George Kittle has 129 yards in return despite ankle injury 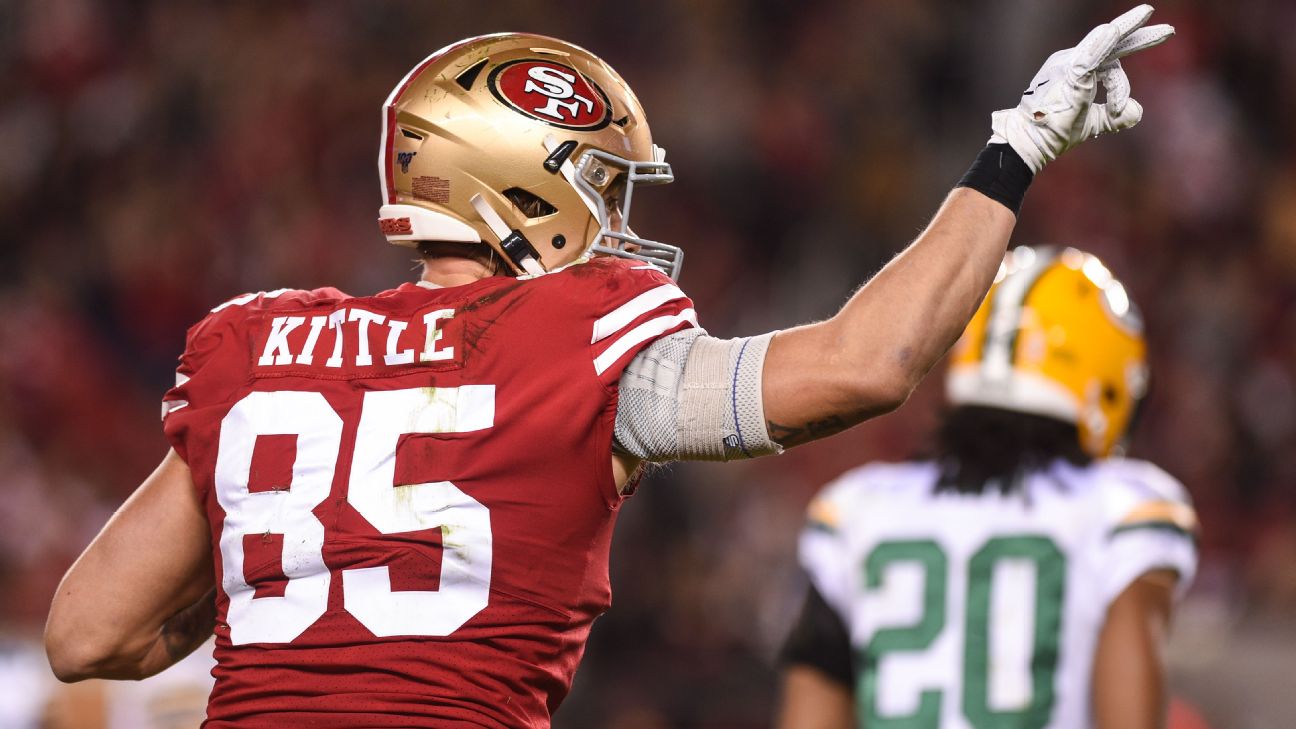 SANTA CLARA, Calif. -- Despite a broken ankle and a banged-up knee, San Francisco 49ers tight end George Kittle made his return to the lineup for Sunday night's game against the Green Bay Packers.

But if you didn't know about those injuries before the game, you wouldn't have been able to tell he was still nursing them from his performance as he sparked the Niners to a dominant 37-8 victory against the Packers on Sunday night.

"It means a ton," 49ers coach Kyle Shanahan said. "You guys all know that. It was hard without him, and to have him back tonight -- obviously what he did in the pass game -- but what he does in the run game is equally as important. It's great to have him out there."

Playing in his first career Sunday Night Football game, Kittle appeared in his first game since Oct. 31 and finished with six catches on as many targets for 129 yards, including a 61-yard touchdown that essentially put the game away in the third quarter.

Kittle said the touchdown came on a play the Niners have been practicing since Week 1 but had yet to break out in a game. On the play, Kittle faked running a corner route after showing as if he were going to run block at the line of scrimmage. He then cut to the post, leaving Green Bay defenders looking the wrong direction as quarterback Jimmy Garoppolo hit him in stride.

"We finally got a call to run it so that was pretty fun," Kittle said. "It was just a corner post, perfect coverage to run it against, Jimmy gave me a perfect ball and I had to unhitch the trailer and outrun a couple of guys."

Before Kittle could get back to his regular self, he had some rust to knock off. Kittle said the first two drives were "definitely not my best football" but once he got his feet back under him, he was catching passes again and clearing lanes in the run game.

Kittle was able to do those things like normal despite dealing with some painful injuries. According to Shanahan, Kittle suffered the injuries on the first play of the team's first game against Arizona.

The Niners and Kittle have remained tight-lipped since on what, exactly, those injuries are, but Shanahan offered more detail after Sunday night's victory.

Shanahan described the ankle injury as a "bone chip," comparing it to bark on a tree that would peel off. Because the ankle remained stable despite the chip and could technically not break worse as a result of the initial chip, it became an issue of pain tolerance. That's something Kittle generally has had plenty of throughout his career and why he was able to play through the injury and finish that Arizona game.

From what Shanahan described, Kittle missed the past two games because of the knee issue, which was something Shanahan called a "popped capsule." That took about two weeks to heal and once it did, Kittle's return became a matter of dealing with pain in the ankle.

"It's mentality," Kittle said. "It's football. Like I said, you either play or you don't play. I wish I could've played last week and the week before; they wouldn't let me. But it's just a mindset."

Without Kittle, the Niners went 1-1, losing an overtime thriller to the Seattle Seahawks,but he made it clear earlier this week he didn't want to miss this upcoming stretch of big games starting with Sunday and followed by a long road trip that includes consecutive games at Baltimore and New Orleans the next two weeks.

Kittle's return also came just in time for a game against the Packers he said he had circled on his calendar for a while. He has previously called last year's 33-30 loss to Green Bay on Monday Night Football one of the games that left him in a rare angry mood.

With Kittle back in the fold, the Niners believe it opens up a world of possibilities.

"Our tight end room has done an incredible job filling in for him these last couple of weeks, but you can't replace a player like George Kittle," tackle Mike McGlinchey said. "I think he's one of the best, if not the best player in the league. He's somebody that I'll be able to tell my kids about someday that I played with that guy. And our offense goes through him as much as anybody else. He's a special player, a special leader and we're very, very lucky to have 85 back." 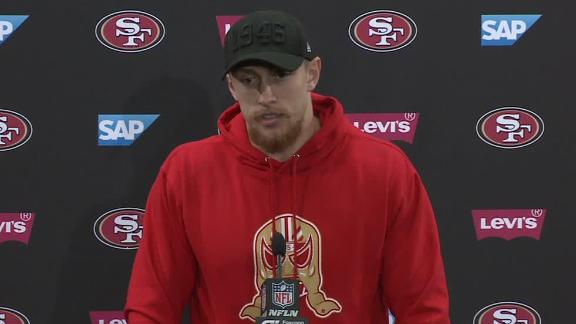 Kittle breaks down his 61-yard TD
George Kittle breaks down what it's like to run the route that got him a 61-yard touchdown Sunday night vs. the 49ers.
Report a correction or typo
Related topics:
sportsespnnewssan francisco 49ersnflgeorge kittle
Copyright © 2021 ESPN Internet Ventures. All rights reserved.
More Videos
From CNN Newsource affiliates
TOP STORIES