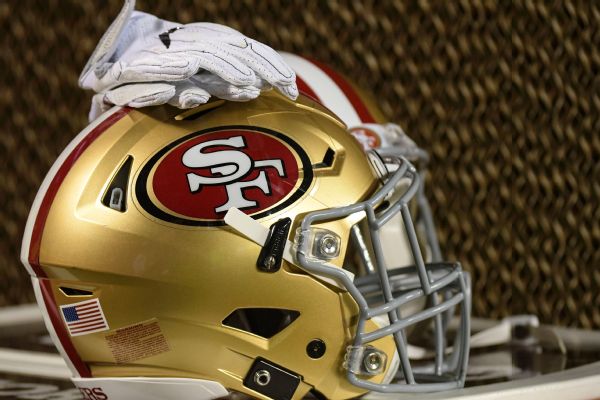 SANTA CLARA, Calif. -- For more than a year, the San Francisco 49ers and law enforcement have been common players in the ongoing controversy surrounding protests taking place during the national anthem.

On Thursday, those two sides came together to announce a new initiative with a shared goal in mind.

As part of that pledge, the Niners are contributing $500,000 toward advocating what they are calling "common-sense legislation" to ban bump stocks and any other mechanism that allows for the conversion of a semi-automatic weapon into an automatic weapon as well as armor-piercing bullets and gun silencers. The groups also are supporting a House of Representatives bill intended to ban devices that increase a weapon's rate of fire.

Beyond that, the Niners and the law enforcement groups are also planning to create public service announcements intended to improve police and community relations around the country.

York said the campaign for the gun legislation was inspired by the mass shooting in Las Vegas that left 59 dead earlier this month.

"Police officers don't use bump stocks and police officers are the ones that are carrying weapons to help protect and serve our country and it seems insane to me that a citizen can buy something like that and take something that was awfully horrific but magnify that and make it so much worse," York said. "I think those are the things that if we want to keep our community safer, if we want to keep stadiums safer and entertainment venues around this country safer, we need to be very vigilant about things like bump stocks and about other things like that that can really put all of us in extreme risk and extreme danger."

The Niners' involvement with frontline police on an initiative such as this is believed to be the first of its kind to include a professional sports team. It comes about 14 months after former 49ers quarterback Colin Kaepernick first began his protest of racial inequality and police brutality in the country by sitting and then kneeling during the national anthem.

At the time, York and the Niners pledged $1 million in donations to causes aiming to address the issues Kaepernick was protesting.

On Thursday, Kelly acknowledged that the protests done by some NFL players have created some frustration among police officers, but said he was pleased that the partnership with the 49ers allowed all parties to focus on a way to move forward.

"Police officers across the country have felt unfairly disparaged by what took place and what is taking place in some stadiums," Kelly said. "We're upset. Some are angry; some are offended. I know that's true for many San Jose cops, but upset feelings do not improve conditions for those of us who respond to calls for service. To the contrary, we cannot dwell on what upsets us.

"Our responsibility to our communities and to our fellow officers is too great to sacrifice because of hurt feelings. We need to move the ball forward. That's why we appreciate Mr. York and the 49ers organization recognizing the role they can play in creating a more understanding and safer America. We appreciate them for stepping forward to work directly with frontline police officers on making our communities safer and working to bring mutual respect to police and community relations. We know it's not easy being first."

Both York and the other police representatives made a point to emphasize that they are not advocating against the Second Amendment but that their effort to ban bump stocks and other similar devices is one grounded in basic logic.

"This is just something that is just common sense and I think the more open dialogue that we have together, the more communication that happens in collaboration, the easier it is for us to work together with community partners to make our communities safer and to make them a better place," York said.

Moving forward, York, the Niners and the law enforcement organizations hope to get more professional sports teams on board with their cause as well as seek support from other community organizations around the country.

And while Thursday's announcement has little to do with the protests taking place during the national anthem, 49ers safety Eric Reid expressed pride in the fact that the Niners are continuing to take a leading role in creating change for the better.

"I think it's one of the issues that we talk about," Reid said. "I think guns are an issue in this country. I'm not saying I believe we should do away with them, but we should put more control over guns. Situations like what happened in Las Vegas and the other mass shootings in our country are just unacceptable and we have to find ways to eliminate those things from happening."
Report a correction or typo
Related topics:
sportsespnsocial justicenational anthemprotestssan francisco 49erspolicenfleric reidlas vegas shootingbump stockpaul kellycolin kaepernick
Copyright © 2020 ESPN Internet Ventures. All rights reserved.
More Videos
From CNN Newsource affiliates
TOP STORIES