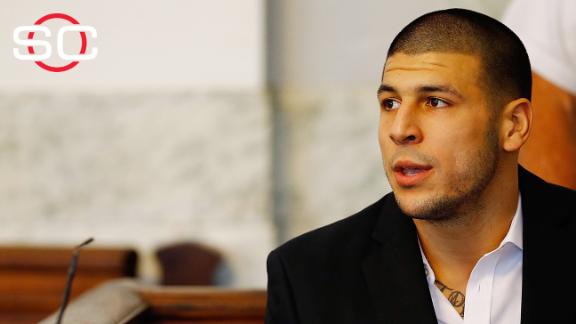 FALL RIVER, Mass. -- Lawyers for former New England Patriots player Aaron Hernandez have filed an appeal of his murder conviction, saying it was based on "improper speculation, conjecture and guesswork."

The appeal filed this week in Bristol Superior Court says "no rational jury" could have found Hernandez guilty of killing Odin Lloyd in June 2013 and cites insufficient evidence for a conviction.

"Rather, improper speculation, conjecture and guesswork was required to reach a guilty verdict," they wrote.

They also argue that even if there were enough to support a murder conviction, the judge should reduce it to second-degree murder because there wasn't enough evidence that he acted with extreme atrocity or cruelty. A second-degree conviction would allow Hernandez to be eligible for parole after 15 years.

Prosecutors have 30 days to respond.

Hernandez was convicted in April of first-degree murder and sentenced to a mandatory term of life in prison without parole. Lloyd was dating the sister of Hernandez's fiancee, Shayanna Jenkins.

Under Massachusetts law, all first-degree murder convictions are automatically appealed.

Gregg Miliote, a spokesman for the district attorney's office, said Friday that the appeal could take years.

Jenkins had a perjury charge against her dismissed Friday in Bristol County Superior Court as part of an immunity deal. Prosecutors had cited her testimony against Hernandez during his recent trial.

Hernandez is awaiting trial in the killings of two Boston men in 2012.

Also this week, Bristol County Superior Court Judge Richard Moses temporarily barred the sale of Hernandez's 2005 Hummer. The vehicle turned up for sale at a used car lot in Wrentham this month.

Moses is overseeing a lawsuit brought by Ursula Ward, Lloyd's mother. Her lawyers have been trying to track Hernandez's assets.

In court documents, Ward's lawyer says there is a substantial likelihood she'll win more than $5 million in the case, and they asked the court to issue a preliminary injunction barring the Hummer's sale.

The judge set a hearing for May 21.