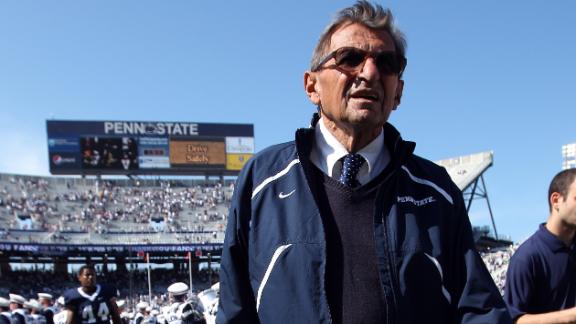 STATE COLLEGE, Pa. -- Construction workers tore down Penn State's iconic Joe Paterno statue on campus two years ago -- but this town might not be without one for much longer.

Two alumni already have received the OK from the borough to install a projected $300,000 life-sized bronze sculpture downtown, about two miles from the original site. And they're hoping the statue, which will feature Paterno sitting on a bench reading Virgil's "Aeneid," will be installed by fall of next year.

They have commissioned an artist, Zenos Frudakis, and will seek to raise $50,000 for "Joe's Bench" on the funding platform Kickstarter come July.

"We just felt that the university was not ready yet" to honor Paterno, said Kim Intorre, one of the organizers. "But the community is."

Intorre said the idea for the statue came shortly after Paterno's death in January 2012 and was not launched in relation to university officials' decision to remove the Paterno statue outside of Beaver Stadium. That 900-pound statue was taken down in July 2012 during the aftermath of the child-sex abuse scandal involving ex-Penn State defensive coordinator Jerry Sandusky.

The NCAA stripped Paterno of 111 wins and levied unprecedented sanctions against the football team, including a four-year postseason ban. But the town here has not forgotten its longtime coach, who spent 61 years on the sideline. If anything, the move has highlighted the growing divide between fans and university officials, who have declined to disclose where the original statue currently resides.

"It's clear the university isn't ready to do anything; they're certainly not ready to put the statue back," said Ted Sebastianelli, one of the project's organizers. "That's their call. Everybody has their own views on the statue and when it should be back up, where it should be and so forth.

"For me, this is something we can do ourselves and it's a great way -- a wonderful way -- to honor Joe for his 61 years of service. It doesn't have anything to do with the statue on campus."

The new statue will be installed near the entrance of The Tavern Restaurant, on a walkway off East College Avenue, and will replace two marble benches. The organizers hope to unveil the finished project by the 2015 season opener but, at the latest, by November 2015.

The artist, Frudakis, has designed other sports sculptures that are featured in such places as the Philadelphia Phillies' ballpark (Mike Schmidt), Georgia Golf Hall of Fame (Arnold Palmer) and Pinehurst Resort (Payne Stewart).

Frudakis knows the statue isn't without its controversy, but he's not concerned.

The Paterno family is aware of the project but is not involved. Still, it was important to honor Paterno and depict him outside of football, the organizers said, because his impact reached beyond the gridiron.

"Without things the Paterno family has done," Intorre said, pausing, "State College's lights would probably not be on."