Amid woes, Niners freeze season-ticket prices for next two years 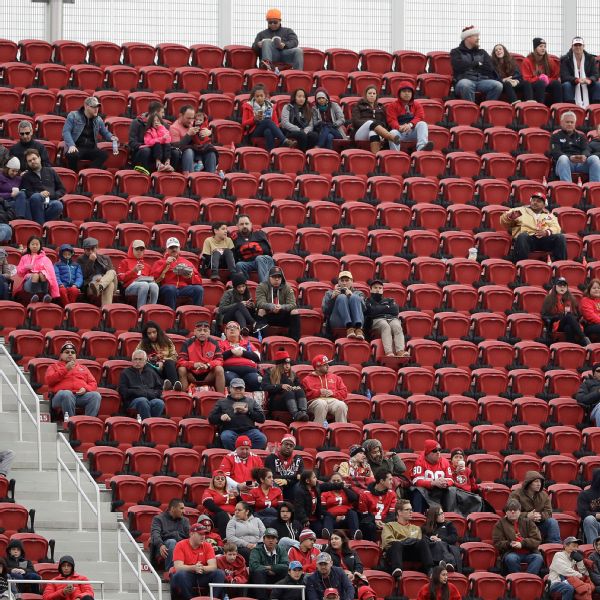 SANTA CLARA, Calif. -- After another disappointing season and looking to hire their fourth head coach in as many years, the San Francisco 49ers are freezing season-ticket prices for the next two seasons.

"We are announcing that 49ers season ticket pricing will be frozen through the 2018 season," the 49ers said in a letter sent to season-ticket holders Tuesday. "Invoices for your 2017 season tickets will be made available to view and pay online in the coming weeks."

The Niners have had some of the most expensive tickets in the league, with the range for season tickets between$850 and $3,750 and the range for personal seat licenses between $2,000 and $80,000.

Those prices, however, have remained the same since Levi's Stadium opened in 2014. Tuesday's news means the prices will be the same for the first five years of the stadium's existence.

The Niners' 8-8, 5-11 and 2-14 records during that span undoubtedly have contributed to the prices staying the same.

San Francisco is in the midst of another coaching search and also is seeking a new general manager. Falcons offensive coordinator Kyle Shanahan is the presumptive next coach, but can't be officially hired until after the Super Bowl; the Niners are scheduled to meet with him in Atlanta this weekend.

The Niners have scheduled meetings with Vikings assistant general manager George Paton on Friday in Atlanta and Cardinals vice president of player personnel Terry McDonough on Saturday in Atlanta for their GM vacancy.

At his season-ending news conference Jan. 2, 49ers CEO Jed York said he was "embarrassed" by the team's recent performance.

"This isn't acceptable to me," York said. "It's not. Our fans deserve better than this. ... There were 59,000 fans here [for the season finale] for a game that certainly didn't matter in the win-loss column. There were a lot of reports before the game about fans being here, not being here, but you still had 59,000 fans here because they cared about beating the Seahawks. I owe them so much more than what we've given to them. And we will give it to them.

"People who have questioned us in the past, we've tried to answer a lot of the questions. We certainly got close for a period of time but we didn't get to our ultimate goal. I'm embarrassed where we are now and I'm going to do everything we can to get us back."
Related topics:
sportsespnsan francisco 49ersnfllevis stadium
Copyright © 2021 ESPN Internet Ventures. All rights reserved.
TOP STORIES
Shocking video shows small child stealing package from Fresno home
Parents charged in school shooting arrested, plead not guilty
Homeowners burn down house in attempt to get rid of snakes
How unusual to charge parents in school shooting? EXPLAINED
Money found inside megachurch walls possibly tied to 2014 theft
1 killed, 3 injured in Fresno County crash
CDC warns of increase in flu cases at college campuses
Show More
Fresno police reform: The department's new policies explained
Woman injured in crash down embankment in Fresno County
Hwy 152 in Madera County closed following multiple crashes: CHP
Fresno County now testing for Omicron variant of COVID-19
Fresno family's apartment robbed after fire displaced them
More TOP STORIES News