As he looks to next season, injured Golden State Warriors star Klay Thompson 'getting better every day' 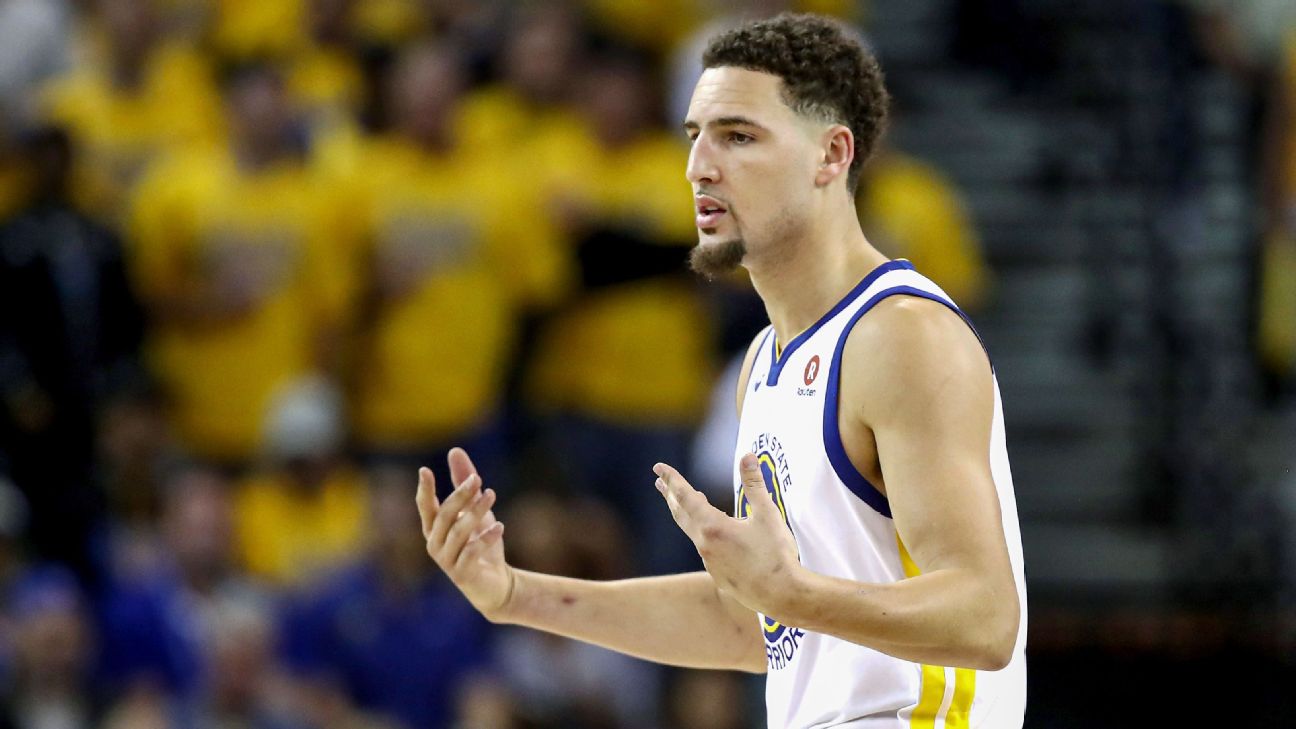 SAN FRANCISCO -- Golden State Warriors swingman Klay Thompson acknowledged that 2020 was "the worst year of my life," and he is hopeful he'll be ready for the start of next season as he continues to recover from a torn right Achilles tendon.

Speaking to the media for the first time since suffering the injury on Nov. 18, 2020, during a workout in Los Angeles, Thompson talked at length about the rehab he has endured for the second consecutive season. Thompson has not played in an NBA game since June 13, 2019, after he tore his left ACL in Game 6 of the NBA Finals against the Toronto Raptors.


"It was probably the worst year of my life, guys," Thompson said during a video conference with reporters prior to Sunday's victory over the Utah Jazz. "It feels good to be back here. I feel love when I'm back in the Warriors facility. My roots are here. [The pandemic] was not easy on anybody. Everyone had their own little trials and tribulations in 2020, but that was it for me -- was losing my grandma Mary, tearing my Achilles, I still think about Kobe [Bryant] every single day.

"There's not a day I don't think about him. And not being able to have that last convo with him ... it was a tough year, guys. Not only for me, but I'm sure for all of you. I'm looking forward to the future, that's for sure."

Later Sunday, perhaps spurred on by Thompson's words,Draymond Greenhad his 26th career triple-double with 11 points, 12 rebounds and 12 assists, and the Warriors held off the NBA-leading Jazz 131-119 to end a season-worst four-game losing streak.

When asked specifically about the possibility of playing at the start of next season, Thompson said that was his goal.

"Absolutely," he said. "It could be a few weeks after, maybe a month after, but it's definitely going to be geared toward the very beginning of the season."

Thompson said he is no longer wearing the protective boot around his leg that he had been wearing since surgery to fix the Achilles. He hasn't been able to start running yet, but he has been using an underwater treadmill, "and that's good for my psyche," he said.

"[The Achilles injury] just happened on a true dribble, pull-up jump shot, a move I do 100 times a day," Thompson said. "So, it was just an unfortunate series of events. Nothing I could have ever prepared for, nor prevented. I was working my butt off 10 months up to that point, and you just got to go back to the drawing board. I knew I did it right away, and it's in the past, but I'm getting better every day."

Thompson admitted that the mental aspect of his rehab has been more difficult than having to work through the physical grind of a second straight season-ending injury.

"It's way harder than any basketball game I've ever had to play," Thompson said. "Way harder than any conditioning drill or practice. The mental toll is not very fun. You always guess if you're going to be the same player you once were, so you have those natural thoughts, but you can't let those overtake you, and you got to realize that this is not unique just to me. So many athletes have been through this. Although I was used to playing 100 games a year for the first eight years of my career, this is just a new set of challenges; and with my style of play, I feel like could be effective 'til my late 30s, so I'm not going to feel sorry for myself right now.


"I'm just going to keep buckling down and keep doing what I love to do."

Thompson said he has taken comfort in knowing that current and former NBA stars have had a similar injury and still returned to their old form, including one of his former teammates, Brooklyn Nets starKevin Durant.

"From what I've read and what I've heard, you may lose 5 percent of your explosiveness, maybe 10 percent," Thompson said.

Thompson said he also spoke to Hall of Famer Grant Hill to get some tips on how he handled his rehab from various ankle injuries in the prime of his own career.

After missing all of the 2019-20 season, Thompson said it was hard to accept the Achilles injury -- and the realization he would miss yet another full year.

"When it happened, in my mind I knew it happened, but I wasn't even that emotional because my heart wouldn't accept it at the time," Thompson said. "I was hoping for a calf strain or something, but I was just doing what I always do every summer. I was in the weight room, I was getting shots up, I was doing two-a-days, the stuff fans don't see. I was so eager to come back to the court after a year away."

Thompson said the support he received from up and down the Warriors organization was important to him as he tried to shake off the disappointment.

"Luckily, for me, I got great teammates," he said.


Warriors coach Steve Kerr was hopeful from the outset of the second injury that Thompson would spend more time around his teammates and coaches this season after spending parts of last year rehabbing in Los Angeles. Thompson has been more of a fixture on the Warriors bench this season -- both at home and on the road -- a move that has been beneficial to both Thompson and his teammates.

"It's helped me tremendously," Thompson said. "I'm at the point in my career where I can lend my voice, and I know guys appreciate that, even just being there on the road, just showing I'm committed, I know that goes a long way, as well. But it's nice when you get to grind with your teammates in the gym every day and you still feel like you're a part of it."

The Warriors, who now sport a 20-19 record, have struggled to find consistency without Thompson. Despite the ups and downs, Thompson remains confident he can help the Warriors elevate back into title contention.

"I anticipate us being right back in contention," Thompson said. "This year has been tough, obviously, with the pandemic and so many new players on the team. I love our group, though. I think we have a great group. These guys come to work every day; they're eager to be great players. And we still have so much basketball left to play so, although our record doesn't reflect how good I think we are."

Thompson also went out of his way to praise No. 2 overall pick James Wiseman. Wiseman has struggled to find a rhythm during his rookie campaign with the Warriors. He was recently benched for the first half of the Warriors' loss to the LA Clipperson Thursday after missing the first practice following the All-Star break because he missed two consecutive days of COVID-19 testing. Wiseman scored 16 points on 8-for-11 shooting while playing 23 minutes versus the Jazz.

"James is going to be a perennial All-Star one day. He doesn't know how good he is yet," Thompson said. "Who does when they're 19 years old? But he just has physical abilities and talent that you just can't teach."

Thompson understands his body might not be ready to play at his usual high level upon his return. Fortunately, there's time between now and then.

"I'll be honest with you guys: I don't expect to come back and just [go] balls to the wall, 38 minutes a night, guarding the best player running around 100 screens," Thompson said. "I'm going to get to that point, I guarantee that. But I've talked to [Warriors director of sports medicine and performance] Rick Celebrini about a lot; it might be 20 minutes to start the season, 18 minutes, like a minutes restriction. We'll see where I'm at." 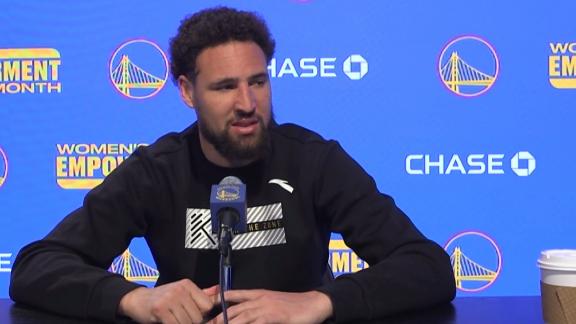