Bartolo Colon, Hall of Famer? Maybe it's not so crazy 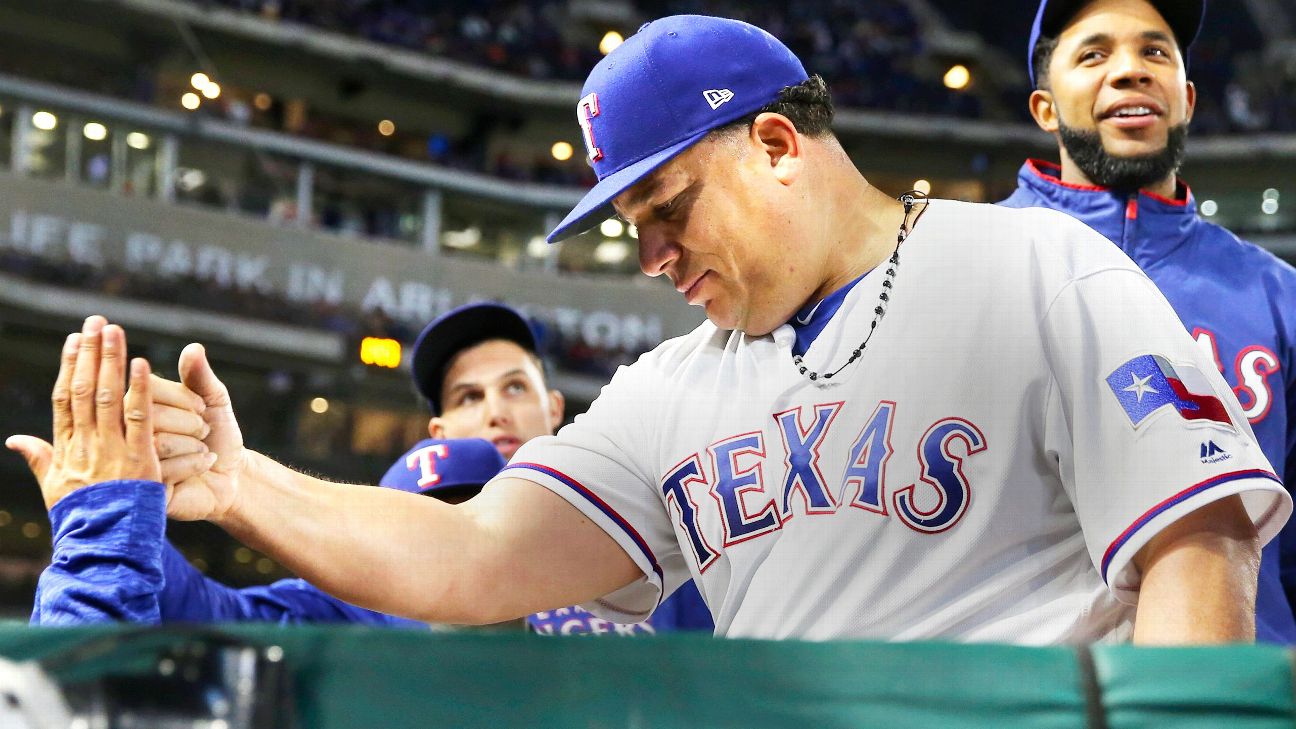 Bartolo Colon is a joy to watch, a wild outlier, a historically significant major leaguer, one of the best pitchers of his generation and clearly worse than the average Hall of Fame starter.

That last clause might end the conversation. I've always been a Put The Best Players In guy. Give me two candidates and, because I am wise and good, I would support the better one. But as we wrote here after a recent round of Hall of Fame results, Hall voters have resisted being turned into a WAR leaderboard rubber stamp. We know better than ever who the best players are, yet we have less clarity than ever about what actually makes a Hall of Famer, other than the collective will of the voters. Trevor Hoffman wasn't really better than Billy Wagner, but he was more historically significant. Tom Glavine wasn't better than Mike Mussina, but he left more of an impression. Vladimir Guerrero wasn't better than Larry Walker, but his greatness was more obvious. Nobody was better than Barry Bonds or Roger Clemens, but ...

For a Put The Best Players In voter, that leaves three options:

1. Fight in the streets to take control back, relentlessly pushing the top name on the WAR leaderboard and ridiculing the voter who doesn't.

2. Acknowledge that the Hall is going to be imperfect but continue to promote WAR-approved candidates, even as the electorate (or some portion of it) does its own thing.

3. Concede. Acknowledge, with WAR and Baseball-Reference and the even more comprehensive stats and sites surely still to come, that we no longer need an electorate to tell us who the best players are. Rather, we need the Hall of Fame to help people in the future remember the players we in the present think they should know. Accept there's only one true standard: Three-quarters of voters want to say, Yeaaaaaaaah.

I'm considering conceding. This is an article about Bartolo Colon and whether there's a compelling, good-faith argument to put him in.

Back in 1985, Bill James created the Keltner List: 14 questions (later upgraded to 15) a person could answer to get a feel for a player's HOF merits. The questions were largely subjective, fitting what is, at root, a subjective vote. But by laying out a framework for thinking through each player, James added a measure of objectivity -- or, at least, consistency -- to the decision.

For Colon, I've created a different list of questions, answering not whether the player is as good as the typical Hall of Famer -- at about 50 Baseball-Reference WAR, Colon trails the average Hall of Fame starting pitcher by almost 25 -- but whether he merits lowering the Hall of Fame average.

1. Would he be the worst Hall of Famer at his position? There are limits to what I'm open to here. I'm not suggesting putting a guy in because he's the king of the Twitter game. But if a player is better than some other Hall of Famers, that tells us he has reached at least the minimum qualifications voters have agreed upon. The Hall has survived despite having some bottom-rung inductees, and it will probably do just fine with one more down there.

Colon is better, by WAR, than a bunch of Hall of Famers, including Dizzy Dean, Catfish Hunter, Bob Lemon and Jack Morris (not to mention the relievers who are in). Those guys all were lifted by arguments beyond WAR, and so too would Bartolo Colon. He has a better ERA+ than either Morris or Hunter, and he's closing in on each player's career innings total. (He could pass Hunter in the next month.) Colon is a better pitcher than some Hall of Famers.

2. Is there any reason to think his place on WAR leaderboards is misleading? Well, with qualifications: There's some reason to considerthat it might be. Colon was born in 1973. He debuted in a brutal era for young pitching, when offense was out of control and pitchers and medical staff probably hadn't quite caught up with the changing style (high-velocity, high-effort, high-strikeout) of pitching. Pitchers broke constantly and never really came back. If we compare Colon not to all pitchers ever but to pitchers born in the 1970s, he starts to stand out: Nobody born that decade threw more innings, and only one (Andy Pettitte) had more wins. Colon will likely finish second among that decade's births in strikeouts. He's only eighth in Baseball-Reference's WAR, though other WAR models have him a few spots higher, and as a roughly league-average pitcher this year, he's still climbing a little bit.

The bottom line is only two starting pitchers born in the 1970s -- Pedro Martinez and Roy Halladay -- are likely to be inducted. Maybe that's enough: It could be a mere fluke that, for a decade, the world quit making great starting pitchers. But it could also be that, for roughly a decade, it was excruciatingly difficult to be a starting pitcher, particularly a young one, and we should be looking for reasons to get a couple other "undeserving" pitchers from that era -- maybe Colon or maybe Pettitte or Johan Santana or Tim Hudson -- into Cooperstown. It could be that surviving the gremlins that ate the ligaments of Kerry Wood and Brandon Webb and Ben Sheets and Mark Mulder and Steve Avery and so many others was the signature skill of value for that generation of pitchers, and Colon had it.

3. Is there any reason to think future generations will consider him better than we do? If your grandchildren are looking at his player page in 65 years, will they sort of get it? The answer to this question -- what does the future know that we don't? -- is inherently unknowable. But I'd speculate (without supporting evidence) that the future could have a higher regard for replacement-level pitching than we do now. Pitching is scarce, pitchers are unreliable, and across platforms -- the draft, multi-year contracts -- teams risk more to get pitching than WAR-based actuarial tables would suggest. Pitcher durability and pitcher availability might be seen, in the future, as a more scarce and valuable resource than we treat them today.

I'd also speculate that the future could give more weight to win-probability-added types of stats, but here Colon's case gets worse. He's 113th all-time in pitcher WAR, and he could easily get into the top 100, but he's just 178th in pitcher WPA and 361st in championship probability added. (Jack Morris and Catfish Hunter, whose overall inferiority props up the fragile Bartolo Colon case, rank 11th and 58th in the latter, which arguably makes all the difference in the world.)

Your grandchildren, though, would just assume we voted him in because he won 250 or so games, and 250 is the new 300, and wins wins wins wins wins. (There's a long-shot chance -- if he can outlast CC Sabathia and win another 20 or 30 games -- that nobody born after Bartolo Colon will ever win more games than Bartolo Colon.) They'll think we were simple and unsophisticated. But let's not flatter ourselves; they're going to think that about almost everything we believe, including WAR.

4. Is there a reason, beyond his statistics, that he is historically relevant? Sure. He's one of the best old pitchers ever. Near as I can tell, he's the oldest starting pitcher to make an All-Star team. Only seven pitchers have thrown more innings after age 40, and his next win will tie him with Cy Young and Warren Spahn for the fourth-most post-40 wins. Winning baseball games at 45 doesn't make a player more valuable, but it is an achievement virtually no baseball player could match.

5. Is there a reason, beyond his statistics, that you'd want him to be remembered for decades? There are things we love about Bartolo Colon that I don't care to share with the future. His first home run, after a career of awkward offensive ineptitude -- that's just for us. The future will know that it happened, but they won't care, and that's fine. It took years of paying attention for us to care.

But Colon's style of pitching (late in his career) is unlike anybody else's, and as much as Bob Feller's or Hoyt Wilhelm's or Tom Glavine's, it deserves to be memorialized. Since his return from surgery in 2011, Colon has thrown 85 percent fastballs, easily the highest frequency of any starter. He has thrown more than 68 percent of his pitches for strikes, shy of only two starters (Cliff Lee and Kevin Slowey) in that time. Only five pitchers (out of almost 600 who met our innings minimum) have allowed contact more frequently. The man came back from career-threatening injuries, turned 40, lost a ton of his velocity and responded not with trickery but by throwing even more fastballs, throwing even more strikes and allowing even more contact -- and he made two All-Star teams and won the 10th-most games in the majors. Since he turned 40 in 2013, Colon has as many wins as Justin Verlander, more than Madison Bumgarner and Stephen Strasburg. Yes, I'm citing wins again; it's a good, fun fact!

Also, he turned running to first base into something almost countercultural.

6. If you were putting together a team of jewel thieves or con artists in a heist movie, would he be on it? Of course he would be. He'd be a street magician or three-card-Monte dealer who does all of his moves in exaggeratedly slow motion, yet manages to fool his audience every time. At the end of the scene, he'd reveal that he also snatched his mark's Bulgari watch. (Bulgari would have paid for the product placement.)

7. Is putting him in the Hall of Fame fundamentally misleading or a force for good in the world? The misleading thing is to act like the Hall of Fame's 224 members are the 224 best baseball players in history. Doing that diminishes Lou Whitaker, Kevin Brown, Kenny Lofton, Bobby Grich -- players who were better than any number of Hall of Famers but don't have that "verified" check mark. The force for good is defining a player's successes broadly, acknowledging that Bartolo Colon's comeback and longevity are just as incredible as athletic accomplishments as Ralph Kiner's peak. (Colon was also suspended for using a banned substance. Acknowledging this without knowing what else to feel about it.)