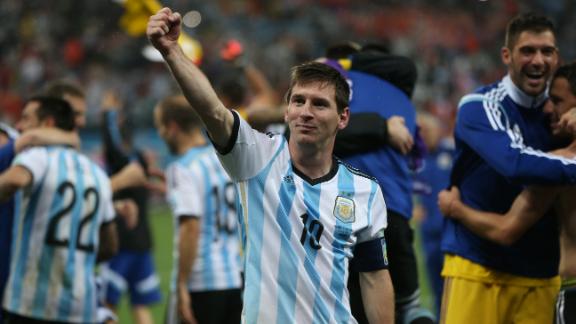 David Beckham believes Lionel Messi can lead Argentina to World Cup glory, and is excited the forward has the chance to star in the final against Germany.

Messi, 27, has often faced criticism that he has not reproduced his Barcelona form on the international stage, but has played a key role as the Albiceleste progressed to Sunday's final against Die Nationalmannschaft.

The Argentina captain has recorded four goals and an assist to set up a match against Joachim Low's men for the ultimate prize in football -- and former England captain Beckham says the stage is set for Messi to impress.

"He's amazing," Beckham said in an interview on adidas football's YouTube channel. "He gives people so much pleasure with the way he plays and what makes him special is he plays as a teammate as well, a good team player.

"He's got great individual skill, but winning means everything to him. If other teammates score goals he's the first one there to celebrate with them and I think that says a lot about him.

"Playing for Argentina, I'm sure there's a certain amount of pressure, but going as far as they've gone is incredible.

"It means so much to him, his family and everyone else around the world, the fact Messi's going to be playing on this stage."

Having been reluctant to offer a prediction for the final, Beckham -- who will attend the match -- eventually tipped Argentina to triumph 3-1.

"It's just amazing that these two teams have come together," he continued. "Germany came to the tournament with great experience, people are not too surprised they've got as far as this. There's no particular star, they've just a great group that play well together.

"Argentina have a group of talented players who play with a lot of passion, but Lionel, I'm just excited to see him play."

Reviewing the tournament as a whole, Beckham relished the emergence of new teams and players on the world stage -- none more so than Colombia and James Rodriguez.

"It's been a great World Cup," he said. "The fact you've seen teams like Costa Rica and Colombia perform the way they have and some great young players coming out of the competition, it's been great to see."

Rodriguez was included among the nominees for FIFA's player of the tournament award after scoring six goals in Colombia's five games, most memorably a superb volley on the turn against Uruguay in the last 16.

And Beckham was in no doubt as to the quality of the strike, stating: "His goal for me was one of the best of the tournament -- as a young player, to have that thought, the way he moved into the ball, the way he turned and struck the ball.

"I've heard about him quite a few times and people told me he was a great talent, but to come on to the world stage at his age and play the way he's played, says how talented he is.

"I think he's got a great future. He's such a talented player and he's a good-looking kid as well, he's got the whole package."