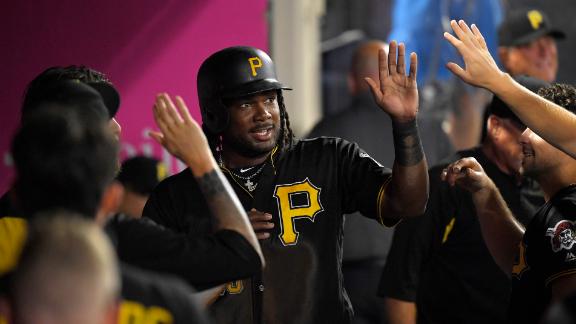 ANAHEIM, Calif. -- Pittsburgh Pirates slugger Josh Bell has pulled himself out of a recent slump with some extra film study and a return to better habits as a hitter.

Not only has he found his form, Bell helped the floundering Pirates find their footing.

Bell homered and had three RBI to help the Pirates rally for a 10-7 win over the Los Angeles Angels on Tuesday night.

"It's awesome to get our bats alive," said Bell, who homered for the fourth straight interleague game to set a new Pirates record. "Hopefully it starts a new trend the next couple of weeks and hopefully we can finish this thing strong."

Jose Osuna drove in two runs, and Bryan Reynolds added a solo homer for the Pirates, who have won consecutive games for the first time since July 6-7 against Milwaukee.

Trevor Williams (5-5) allowed five runs in five innings. He was tagged for three runs in the first inning, but responded to take some pressure off Pittsburgh's bullpen and get back to .500 on the season.

Pittsburgh, which is now in position to sweep a series for the first time since June 21-23 against San Diego, can thank its offense for getting back on track. And no one has been more important to that turnaround than Bell, whose two-run shot to center tied the game at 5 as part of a four-run fifth inning.

The Pirates took a 6-5 lead on Osuna's double to left that scored Colin Moran, and Pablo Reyes drove in another run to make it 7-5 and tag Taylor Cole (2-4) with the loss.

Bell's 31st homer of the season continued a recent long-ball flurry with his fourth homer in the past three games. He is also one away from tying Bobby Bonilla's 1990 team record for homers by a switch-hitter in a season at 32.

Justin Upton had three RBI and Shohei Ohtani added two for the Angels, who have lost 10 of their past 12. Albert Pujols moved into a tie for 15th place in career hits with an RBI single in the first inning.

After falling behind 4-0 on Ohtani's RBI triple in the second inning, the Pirates started their comeback in the third. Bell dropped a bloop single into left field to get Pittsburgh on the board, with Reynolds scoring and Bell reaching third on a throwing error by Angels starting pitcher Griffin Canning to pull within 4-2. Moran's double drove in Bell and cut the deficit to 4-3 before Luis Rengifo made it 5-3 with an RBI single in the bottom of the third.

Pittsburgh went up 8-5 on Osuna's sacrifice fly with the bases loaded in the sixth inning. They made it 10-5 in the seventh on an RBI double by Adam Frazier, who had three hits, and Reynolds' solo homer.

Pujols tied Adrian Beltre (3,166) in career hits with his single up the middle to drive in a run as part of a three-run first inning for the Angels, with Ohtani and Upton picking up the other RBI.

Upton had a two-run single in the ninth inning to score Mike Trout and Ohtani that pulled the Angels within 10-7 before Felipe Vazquez (22) came in to see out the game.

"Sometimes you got to believe in things you can't see," Hurdle said. "And we've had different guys step up the last two days in different areas and give us big pushes."

Marte had an outfield assist in the bottom of the fifth with his throw from deep center to Jacob Stallings, allowing the catcher to tag Kole Calhoun out at home and deny the Angels a run. Hurdle called it "one of the prettiest plays in the game," and Bell credited Marte's effort for the win.

"He was definitely the player of the game with that.," Bell said. "Got Trevor the win, and allowed our bats to take hold of the game and keep the game in our grasp."

Canning allowed three runs in four innings after being activated off the injured list for inflammation in his right elbow earlier on Tuesday. Angels manager Brad Ausmus said he would be cautious with the workload for Canning, who gave up six hits and three walks while striking out two, over the remainder of the season.

"His stuff looked really good, but the pitch count got up," Ausmus said. "A little trouble locating the ball, and the error, that hurt him. But, overall, I thought more importantly he looked healthy, looked strong."

The Angels optioned RHP Jose Rodriguez to Triple-A Salt Lake on Tuesday and recalled RHP Jake Jewell from Triple-A on Tuesday. They also placed LHP Adalberto Mejia on the restricted list for personal reasons. Ausmus did not know when Mejia would rejoin the team.

Angels: RHP Noe Ramirez (viral infection) could be recalled from the injured list by Thursday following a successful rehab assignment at Single-A Inland Empire, Ausmus said. Ramirez must serve a three-game suspension for hitting Astros OF Jake Marsinick with a pitch on July 16 when he rejoins the team.

Pirates RHP Chris Archer (3-8, 5.23 ERA) has gone 11 starts without a victory, the longest winless stretch in his eight-year career. Archer is 0-3 with a 5.25 ERA since his last win on June 6. Angels LHP Dillon Peters (2-1, 3.45) has thrown 13 2/3 innings over his past two appearances, the longest outing during a two-game span in his three-year career.