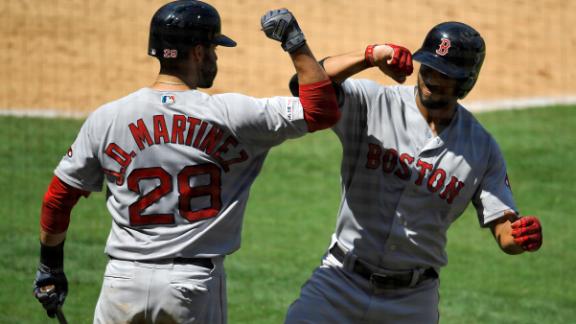 ANAHEIM, Calif. -- Xander Bogaerts knows the Boston Red Sox aren't going to erase their wild-card deficit quickly, but he did his part on Sunday to help them make up more ground.

Bogaerts had three hits, including a homer, and three RBI as the Red Sox wrapped up a successful road swing with a 4-3 victory over the Los Angeles Angels.

Boston took two of three from Los Angeles and went 6-2 on the trip. Combined with Tampa Bay's weekend sweep of Cleveland and the Yankees taking two of three from Oakland, the Red Sox moved within five games of the second AL wild card. They began the trip 6 1/2 games back on Aug. 19.

"Sometimes you want to see it go down a full game, but hopefully we will start seeing it go down some more," Bogaerts said. "We definitely are going to have to have the best month of the season, maybe the last two seasons."

J.D. Martinez also homered for Boston and extended his hitting streak to nine games. The slugger had six home runs and 18 RBI during the road trip.

Angels slugger Albert Pujols had an RBI double in the third inning for his 3,185th career hit, passing Cal Ripken Jr. for 14th place. Justin Upton homered in the eighth.

Bogaerts and Martinez went back-to-back in the third. Rafael Devers singled with one out and Bogaerts sent Andrew Heaney's changeup over the wall in center for his 31st homer of the year. He has 103 RBI, which matches a career high.

On the next pitch, Martinez homered to left-center. It was the ninth time this season Boston hit consecutive homers. Bogaerts also drove in Mookie Betts with a single in the first.

"It seems like he has found his rhythm. He is attacking pitches where he wants to and isn't expanding the zone," manager Alex Cora said of Martinez, whose 34 homers are tied for fourth in the AL.

David Price came off the injured list and made his first start for the Red Sox since Aug. 4. The left-hander threw 45 pitches in two innings and allowed one hit and a walk with two strikeouts.

"I'm good. Executed pitches when I needed to. It was good," Price said. "I was one side of the plate before I went on the injured list and today had some good fastballs."

Ryan Weber (2-2), the third of six Boston pitchers, gave up one hit and a walk in two innings to get the win.

Brandon Workman handled the ninth for his 10th save. He hit Mike Trout with a two-out pitch before getting Brian Goodwin to fly out.

"From the beginning I just didn't have a great rhythm. I didn't have a great energy on the mound," Heaney said. "That caused me to leak some balls middle and just not really get it going. I felt like I found a little bit late, but at that point it's trying to salvage."

The Angels went 2/3 on their homestand and are a season-low eight games under .500 for the second time this season.

Pujols had one of his best weekend series in a long time. The 39-year-old first baseman played all three games and was 7 for 20 with a home run and seven RBI.

"He does an excellent job of cutting down his swing with runners in scoring position. Not trying to do too much and going the other way more frequently," Angels manager Brad Ausmus said. "He's maintained a good maintenance program all year long. Has kept himself healthy. We have some off days coming up here with the schedule that should keep him fresh, including the fact he played in a 15-inning game the other night."

Red Sox: INF Michael Chavis (sprained left shoulder) is dealing with upper-body soreness on his right side. Chavis is on a rehab assignment at Triple-A Pawtucket and will be evaluated by the training staff Monday.

Angels: 2B Tommy La Stella (broken right leg) is taking grounders and working in the batting cage, but there is no timetable for his return.

Angels: Off on Monday before heading to Oakland to begin a six-game road trip. RHP Jamie Barria (4-7, 6.10 ERA) gets the call Tuesday.