Browns run onto field with first responders; other teams' players protest during anthem 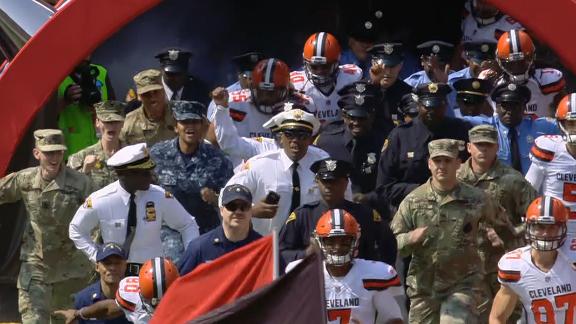 ESPN
By ESPN.com news services
A week after a video emerged ofSeattle Seahawks defensive end Michael Bennett being detained by Las Vegas police, Bennett remained seated during the national anthem before the team's opener against the Green Bay Packers on Sunday.

Seahawks center Justin Britt stood next to Bennett with a hand on his shoulder, as he did in a Seahawks preseason game in August. Running back Thomas Rawls stood on Bennett's other side. Defensive end Cliff Avril joined Bennett in sitting on the bench for the tail end of the anthem.

Martellus Bennett, Michael's brother, stood at the far end of the Packers bench with his right fist in the air, while Ha Ha Clinton-Dix helped hold the giant flag at midfield. Bennett said earlier this week that he wasn't sure whether he would make any kind of protest during the national anthem after news of Michael's incident with police became public.

"That's a sign of unity with my brother. That's something I've done in the past, when I was with the Patriots last year," Martellus said after game. "For me it's a sign of unity to let the world know that I see what's going on and it's not going unnoticed. I'm doing what I can to help too, just letting people know that hey, I'm behind you, I'm behind my brother. There's a lot of stuff going on in the world and the community and that I do support and I am working things to make it better. Not much more than that, just a statement to say, hey I'm with you."

The anthem was performed by Blues Traveler frontman John Popper on a harmonica.

As expected, the Cleveland Browns were joined by police officers, firefighters, EMTs and the military as they ran onto the field before Sunday's game against the Pittsburgh Steelers.

The same safety officials lined up on the sideline with the team during the national anthem.

No players knelt during the anthem, and two police officers forcefully joined arms with linebacker Christian Kirksey, who led the team in a prayer as a group of players knelt before the second preseason game.

Before the anthem, several players and coach Hue Jackson were featured on a video that spoke to the importance of unity and equality.

"We believe together we can make our country a better place," quarterback DeShone Kizer said.

"Today and every day, we are banded together as one," Pro Bowl left tackle Joe Thomas said.

"We want our football team to be a great unifier of our community," Jackson said.

Safety Malcolm Jenkins continued his protest by raising a fist over his head before the Philadelphia Eagles' opener at the Washington Redskins.

Defensive end Chris Long kept his hand on Jenkins' back for the entire playing of "The Star-Spangled Banner," as he did during the preseason. Safety Rodney McLeod put a hand on Jenkins' shoulder as well.

Raiders running back Marshawn Lynch, who sat a number of times during the anthem in the preseason, again sat on Sunday. He hasn't discussed why he sits during the pregame.

Los Angeles Rams outside linebacker Robert Quinn raised his right fist in the air during the national anthem, maintaining his custom since the start of last season.

Quinn shook his head when asked about the Michael Bennett situation earlier this week.

"It just goes to show you what's happening in America," he said. "It's crazy, you know. You can't keep making excuses."

49ers safety Eric Reid again knelt for the national anthem, following through on his promise to continue the protest he was a part of all last season along with Colin Kaepernick.

Ten teammates surrounded Reid with a hand on his shoulder as he knelt.

About 50 members of the Kappa Alpha Psi alumni chapter in the Motor City marched about a mile Sunday in a peaceful protest that ended just outside Ford Field.

Kaepernick remains unsigned after opting out of his contract with the San Francisco 49ers. His supporters believe that the league is punishing him for refusing to stand during the national anthem last season to protest police brutality.