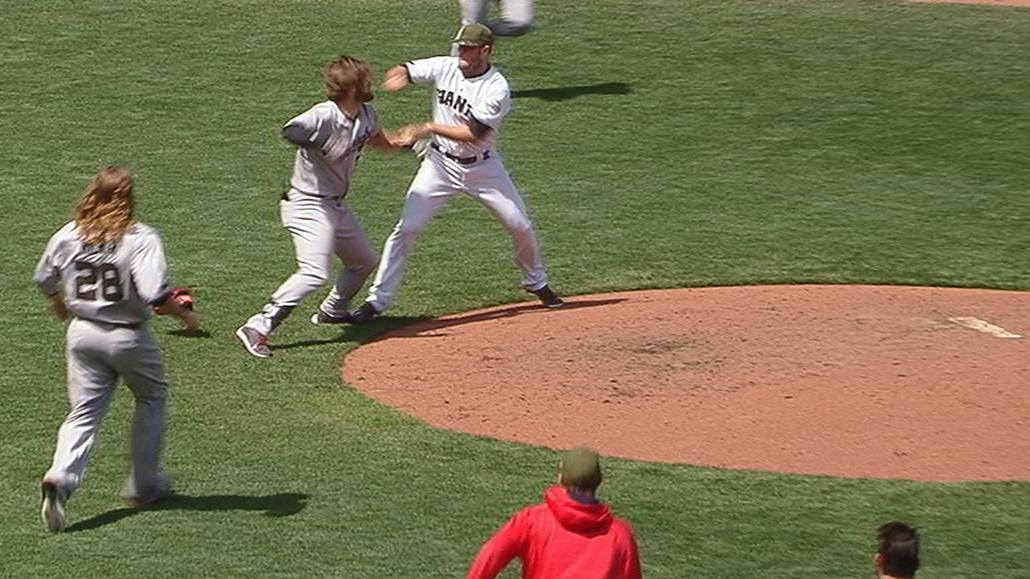 Strickland plunked Harper in the hip with a 98 mph fastball. Harper then gestured at Strickland with his bat, strode to the mound and threw his helmet at the Giants pitcher before the two exchanged blows as benches cleared.

"You either go to first base or you go after him, and I decided to go after him," Harper said of his decision to charge the mound.

It was the first time the two had met since Harper hit two home runs off Strickland during the 2014 National League Division Series between the Nationals and Giants.

The 6-foot-4, 220-pound right-hander had to be carried off the field by several San Francisco teammates to keep him away from the melee.

Despite their history, Harper said he didn't step into Monday's at-bat thinking Strickland would hit him.

"No, not in that situation," Harper said. "Especially since it's been three years and they won the World Series that year.

"So I wasn't really thinking about it at all. But when somebody comes at you like that, throws a 90 mph fastball where he did, I wasn't very happy with it and took it into my hands and tried to go after him."

"Harper gets hit. You're looking at a guy [Strickland] who has given up some home runs, and he'll tell you he was trying to come in, didn't want to make a mistake there. But it looks bad," Bochy said. "So you had two guys who probably don't care for each other much."

Strickland said he was trying to pitch inside and that once Harper charged the mound "it was go time," but the pitcher said he wasn't trying to hit the Nationals slugger.

"I can see how [our history] kind of stands in people's minds, but that's the past," Strickland said. "Like I said, I left the ball over the plate a couple times to him. He's taken advantage of that. So obviously I'd rather miss in than over the plate."

"We're ahead 2-0, two outs, nobody on base," Baker said. "That's a prime time to hit somebody if you're gonna hit him. It looked like it was intentional to me."

While Harper didn't enjoy being hit, he said he is glad that Strickland went about it the way he did.

"One thing I've got to say about Strickland is he hit me in the right spot, so I do respect him for that," Harper said. "He didn't come up and in toward my face like some guys do, so I respect him on that level."

Despite respecting Strickland for where he threw, Harper said he isn't sure why the Giants reliever is holding a grudge.

"It just wasn't relevant. Like I said, it was three years ago, over a thousand days I guess. I don't know why he's thinking about it," Harper said. "He's got a World Series ring. It's on his finger and he's able to look at it every single night."

Both players were ejected from the game. It was the first time Harper had been tossed for fighting in a game.

For Strickland, it was the first time he had hit an opposing batter this season in 21 appearances.

Major League Baseball will review the incident, as is the league's customary protocol following all fights.

"You never want to get suspended or anything like, but sometimes you just got to go and get them and can't hesitate," Harper said.

Both managers were happy that all of their players walked away unscathed.

"It's unfortunate," Bochy said. "It was a pretty good pile, so we're probably lucky somebody on either side didn't get hurt."

Asked if his instinct coming out of the dugout is to get Harper out of there, Baker said, "My first reaction is I can't get there as quickly as I used to. My second reaction is I don't want to get anyone stepped on or hurt."

While catchers are often expected to serve as interference between their pitcher and a charging player, Giants catcherBuster Poseylargely stayed away from the fray.

"There were some big guys tumbling around out there,'' said Posey, who recently spent time on the disabled list with a concussion. "So it was a little dangerous to get in there sometimes.''

The Nationals went on to claim a 3-0 victory in the series opener. 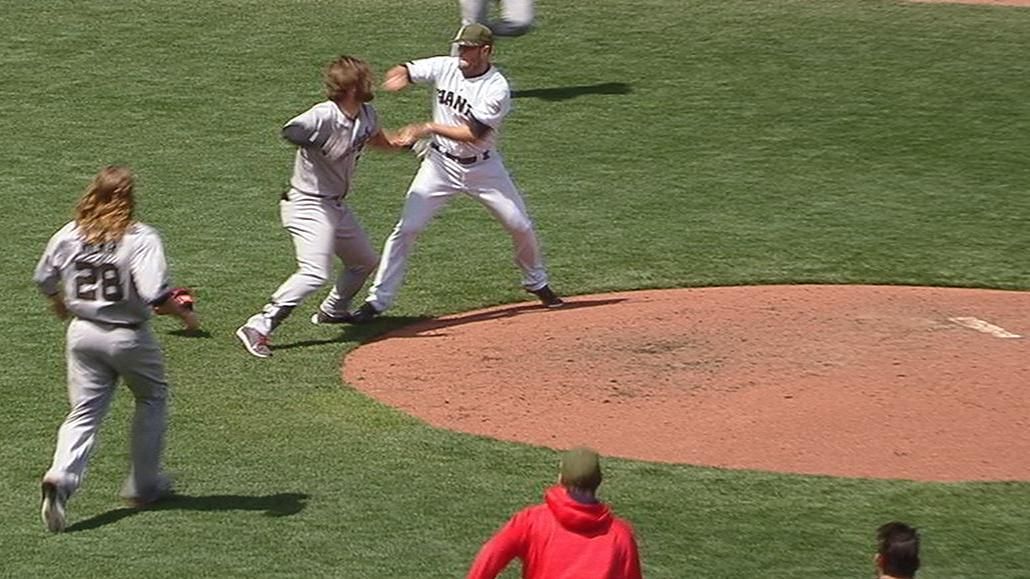 Harper charges mound and throws punches
Bryce Harper takes exception to getting hit by Giants pitcher Hunter Strickland, and Harper connects on a punch to the face of Strickland. Both players would be ejected.