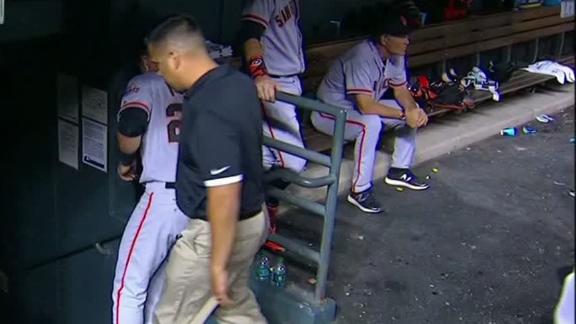 The team said both players' status was day to day.Giants manager Bruce Bochy says after the game Posey has inflammation in left ankle. He also said Nunez was not expected to need to go on the DL.

Posey said he was optimistic he won't miss much time.

Nunez suffered hamstring tightness while running out an infield single in the seventh inning and was promptly removed from the contest. Gorkys Hernandez replaced Nunez as a pinch runner.

Posey then slugged a home run in the same inning -- scoring Hernandez -- but injured his ankle on the play. He limped around the bases before heading directly to the clubhouse with the Giants' training staff.

He was officially ruled out in the bottom of the inning with a sore ankle.

Austin Slater took over for Nunez at third base, made his first professional appearance at the position, and Nick Hundley replaced Posey.

Posey is second in the National League with a .356 batting average. His homer in the game was his ninth of the season.

Posey limps off field after hitting homer
Buster Posey smacks a two-run dinger to left field in the seventh but appears to be in pain and would limp back to the clubhouse.
Report a correction or typo
Related topics:
sportsespnbuster poseyeduardo nunezgorkys hernandezmlbinjuriessan francisco giantsnick hundleyaustin slater
Copyright © 2021 ESPN Internet Ventures. All rights reserved.
More Videos
From CNN Newsource affiliates
TOP STORIES