Can Jrue Holiday's return save the New Orleans Pelicans' season? 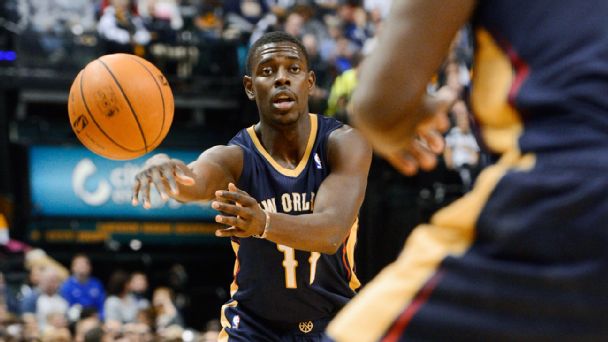 METAIRIE, La. -- As mounting losses bury them deeper and deeper in the Western Conference standings and Anthony Davis holds out for help like a kitten caught on a telephone wire, the New Orleans Pelicans have cautioned not to expect any miracles upon the return of Jrue Holiday.

"We don't want to put pressure on him and make him feel like he's the savior," general manager Dell Demps said.

"Jrue's not the cavalry," coach Alvin Gentry said last week. "He's not coming in with the white horse and the stuff like that."

Indeed, when it comes to New Orleans' postseason chances, the white horse may have already left the barn.

The Pelicans, at 2-10, are one game better than they were this point last season, when an injury-induced malaise ultimately gave way to a disappointing 30-win season. Precedent doesn't foretell a much kinder future this time around, either: In NBA history, of the 65 teams that have started 2-10, eight have gone on to make the playoffs.

But perhaps this offers a shred of hope: The most recent team to begin 2-10 and make the postseason cut was the 2010-11 Philadelphia 76ers, who started a 20-year-old point guard named Jrue Holiday.

That's just the beginning of why Holiday's return from a three-month hiatus to tend to his wife and new daughter has loomed over this beleaguered franchise, even as every member with a speaking role has, to their credit, stressed patience and family first.

"He's a great defender, scorer everywhere. He's a leader. He's been there, he's been in the playoffs, he's upset guys in the playoffs. He's a proven vet, but he's still young. He's definitely a core-type player, one that you [build] a franchise around."

The Pelicans obviously have one of those in Davis, whose numbers have swelled across the board as his role expands to include keeping tempo, singing backup and cleaning up afterward. Even after missing Wednesday's loss in Orlando, the 23-year-old superstar leads the team in minutes played, points, rebounds, blocks, steals, field goal attempts, field goal makes, free throw attempts, free throw makes and morose interviews.

But as anyone with internet access will tell you, Davis needs more support. Even as their superstar maximizes an offensive workload befitting Atlas, the Pelicans rank a meager 27th in offensive efficiency. Take Davis and the since-waived Lance Stephenson off the ledger and their field goal percentage (40.8) would rank tied for last.

The league's basement is also where you'll find a 3-point percentage (29.1) that somehow dips on open looks (22.3 percent, per NBA.com/Stats), of which there are plenty thanks to the attention Davis draws.

E'Twaun Moore has stretched out his legs in new environs but an aversion to contact leaves him dependent on a slow-coming 3-ball.

Tim Frazier scraps and knows how to keep Davis stuffed with touches (40 percent of Davis' buckets come off Frazier passes, per NBA.com/Stats), but has seen his turnover rate steadily rise as defenses adjust to play the pass.

Terrence Jones had perhaps the best non-Davis offensive performance with 26 points in Wednesday's loss to the Magic, but their skill sets may overlap too much to coexist like they did in Kentucky's 2012 national title run (the duo has a minus-8.6 net rating in 134 minutes this season, per NBA.com/Stats).

The Pelicans don't need a second-coming. They'll take something, anything from a talent like Holiday to galvanize an offense that mustered league-average last season despite a parade of late D-League call-ups but has struggled this season with parts coach Alvin Gentry admits are better-suited in tertiary roles.

"With a guy like [Holiday], a guy that can score the ball the way he does -- you're not just talking about scoring but efficiently," Hill said. "Getting to the line, creating for others. You can't just all of a sudden triple-team Anthony Davis anymore. You have to account for [Holiday]. Regardless if he plays five minutes or 48 minutes, he's going to affect the game. He just brings an intensity that if you're not ready for him you'll never be ready for him."

Davis, whose effective field goal percentage last season rose four points when he played next to Holiday, per nbawowy.com, has been looking forward to the opportunity since the summer.

How quickly they'll be given the opportunity to showcase their pick-and-roll synergy remains to be seen. Holiday, at least from the jump, is likely to come off the bench until he gets back up to NBA speed.

It will be harder to keep Holiday -- who occupied a bigger role on offense than ever last season yet kept his turnover rate among his career lows and assist rate among his career highs -- away late. The Pelicans are tied for the most crunch-time opportunities this season, per NBA.com/Stats, but have also totaled the most losses (7) in those situations in large part because of the sixth-worst clutch offense.

"I think I can do whatever they want me to do, if it's cheerlead, hand out Gatorades, play defense, call a set, whatever it is. I'm just here to help," Holiday said. "Down the stretch I do think I could help with some directing and just tightening it up at the end of the game."

No one will confuse Holiday's talents for those of Davis, whose origin story has reached the part where the superhero begins to hone his newfound powers. But a steady hand to guide him may be enough to save the day.

"Until he gets back I really won't be able to understand it, but I'm pretty sure he has [maybe] the largest role on our team," Hill said. "AD, being a young guy still coming into his own. Of course [Davis] can score the ball. But just that leadership role he's taken -- he's definitely taken strides, but Jrue's done it. Jrue's played with multiple All-Stars, played in the playoffs.