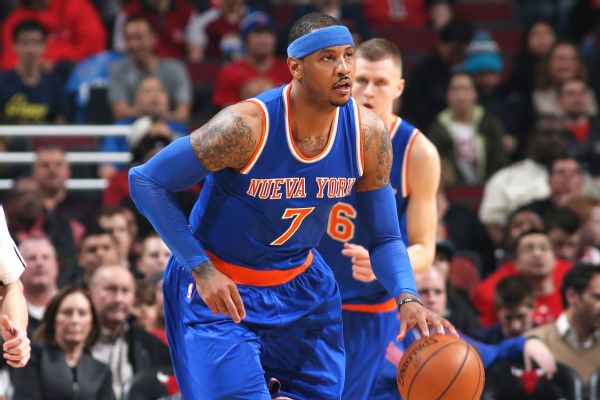 LOS ANGELES -- Carmelo Anthony says he has had "countless conversations" with former Lakers great Kobe Bryant about the best ways to deal with how Phil Jackson criticizes the New York Knicks star through the media.

Bryant, after all, certainly has dealt with the 11-time NBA champion coach.

"Me and Kobe have countless conversations about that," Anthony said Saturday after the Knicks practiced in Los Angeles ahead of Sunday's game against the Lakers.

In an interview with CBS Sports, Jackson recently said Anthony can play the "role that Michael Jordan and Kobe Bryant played" in their teams' triangle offenses, but Jackson said Anthony sometimes breaks a team rule by holding on to the ball too long.

Anthony said he had a short meeting with Jackson on Saturday about the recent dust-up but added that he has moved past the situation and is determined "not to read too much into it."

"That's something I've learned over the years, especially with Phil," Anthony said, referring to the advice Bryant gave him. "[Jackson's] going to talk. Nobody can stop that. So try not to read into it too much."

Anthony declined to share what Jackson said to him Saturday but characterized it as "short" and that it would probably come out publicly soon anyway.

"I'm pretty sure I might be in a book," Anthony said jokingly. "Maybe a couple of books."

One issue that came up in the meeting, according to Anthony, was the idea that Jackson seems to bring up the Knicks forward in many of his interviews.

"It wasn't anything that was affecting me. It was just something that if I got an opportunity to speak to him, I was going to tell him how I felt about what happened and what was said, if anything was misinterpreted. He spoke his piece."

Anthony said he has a better understanding of Jackson's message when he said his star forward has a penchant for holding on to the ball for too long. But he'd prefer that kind of message be delivered in private.

"He's got to be careful with the choice of words that he uses," Anthony said. "He understands that, he knows that."

As far as he's concerned, though, the issue is behind them.

"We talked. We had a conversation this morning. He said his piece. I said my piece. Two men spoke," Anthony said. "There's not many amends to be made. From my standpoint, there's no problems, there's no issues."

No one has ever seen this side of Carmelo
Ohm Youngmisuk explains why it is unusual to see Carmelo Anthony show his unhappiness after Phil Jackson made some critical comments about him.
Related topics:
sportsespnphil jacksonnew york knickscarmelo anthonymelopublic criticismnbakobe bryantlos angeles lakers
Copyright © 2020 ESPN Internet Ventures. All rights reserved.
More Videos
From CNN Newsource affiliates
TOP STORIES