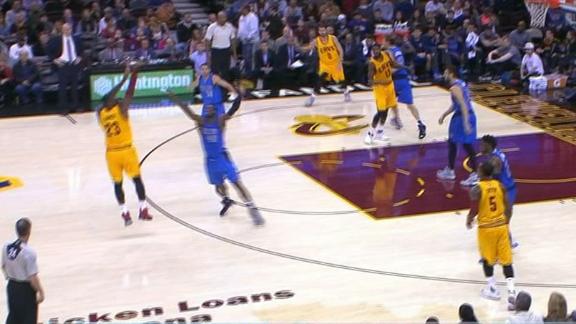 CLEVELAND -- The Cavaliers set an NBA record by becoming the first team to have back-to-back regular-season games with 20 3-pointers, according to Elias Sports Bureau research.

The team made 21 on Wednesday in racking up 137 points in a win against the Portland Trail Blazers, and the Cavs piled on 20 more Friday in a 128-90 rout of the Dallas Mavericks. There had been only 25 games in league history in which a team made 20 or more 3s in a game before this week, according to BasketballReference.com.

The Golden State Warriors accomplished the feat seven times last season but never in back-to-back games. The Cavs had consecutive 20 3-pointer games against the Atlanta Hawks last season in the playoffs, making a combined 46 in Games 2 and 3 of their 4-0 series sweep.

The Cavs have now recorded 10 or more 3-pointers in 14 consecutive games. They have made at least seven 3-pointers in 54 straight games dating to last season, an NBA record.

"We were making 11, 12 or 13 3s (per game), but I thought that we could shoot better," Cavs coach Tyronn Lue said. "The last couple games the guys have been shooting really well."

After Kevin Lovehit 8 of 12 3-pointers Wednesday in a 40-point showing, he hit 7 of 9 against the Mavs and scored 27 points.

Love had been reducing his 3-point volume earlier in the season and looking to get to the foul line. But after reviewing film with assistant coach Phil Handy, Love said he was passing up good shot opportunities because he was aiming to draw fouls instead. So Love abandoned pump fakes and looked to shoot quicker after catching passes.

"So many guys close out to me so hard, but having my size, I'm able to get the ball off quick if I just catch and shoot," Love said. "I think I saw that and I've been able to do that. That's only going to open up more for everybody. Feels good right now."

The team is averaging 14 3-pointers per game this season and shooting 40 percent as a team, tied with the San Antonio Spurs for best in the league. The Cavs average 35 3-point attempts per game, second to the Houston Rockets, who average 36.

LeBron James had 11 assists Friday after picking up 13 Wednesday. Of the 24 assists, 16 of them set up 3-pointers. He also had five assists that led to layups or dunks Friday.

"That's what we're capable of, and we've been doing it on both ends the last couple games," James said. "Obviously people [are] going to look at the shooting, the way we're shooting the 3-ball right now, but defensively we stepped it up more now. That's the good thing for me, what I like to see."