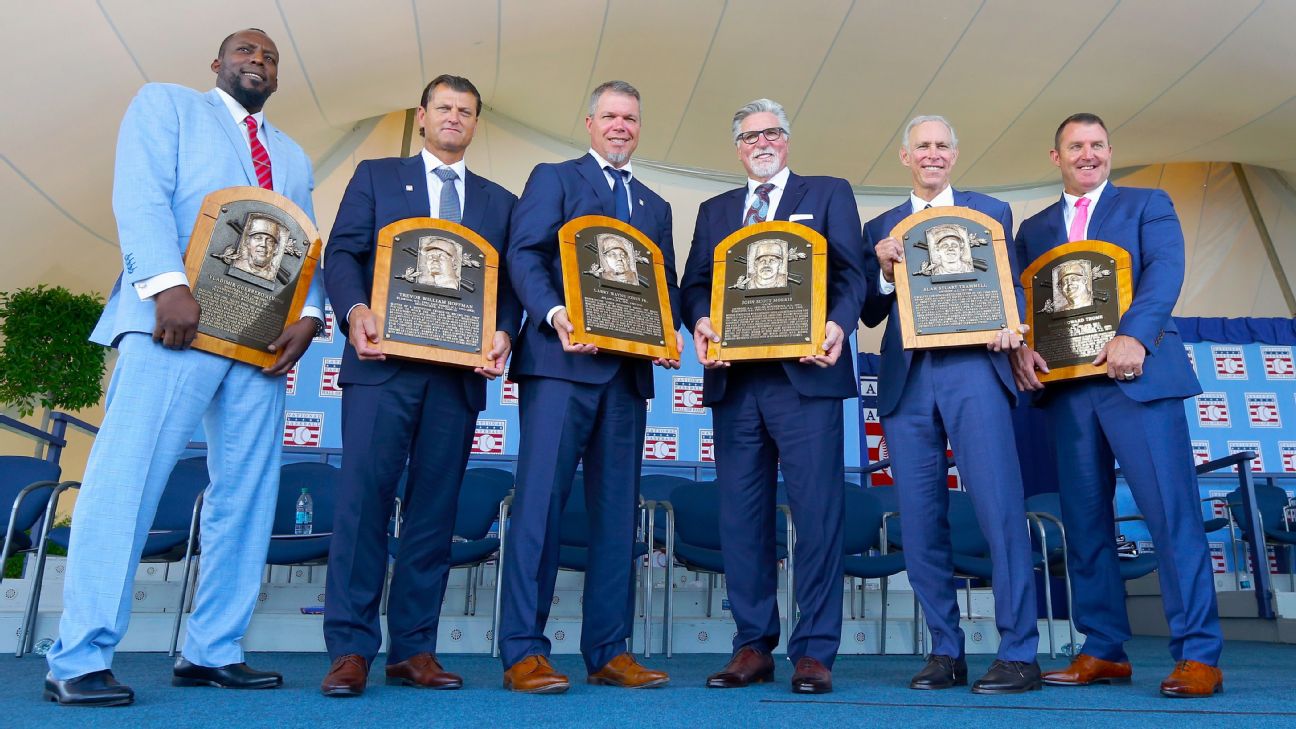 COOPERSTOWN, N.Y. -- Chipper Jones didn't bow to the pressure of the moment, and it was considerable.

Jones was inducted Sunday into the Baseball Hall of Fame, and he stood there delivering his speech with wife, Taylor, staring up at him, hours away from giving birth to a son to be named Cooper in honor of the special day.

Faced with that daunting task, Jones delivered flawlessly, just as he did during his 19-year career with the Atlanta Braves.

"She changed my life forever," Jones said as his wife brushed away tears. "It took me 40 years and some major imperfections in me along the way to find my true profession. Now we've taken our two families and blended them together. It has given me what I've been searching for my entire life -- true happiness."

Jones controlled his emotions in a speech that took the crowd through his entire career, starting with his rookie season when he helped lead the Atlanta Braves to the 1995 World Series title. He was one of the greatest switch-hitters in baseball history, in the mold of his dad's favorite player, Mickey Mantle, and finished with a .303 career batting average, 468 home runs, and 1,623 RBI, credentials that earned him election on the first try.

Jones also heaped praise on his mom and dad -- "You're the reason I'm on this stage,'' he said -- and ended his speech by thanking the loyal Atlanta fans.

"You stuck by me," he said. "You're the reason I never want to play anywhere else. I love you guys. Thank you."

Emotional during a Hall of Fame visit in February to tour the museum in preparation for this day, Thome held it together despite having to wipe away tears after his daughter Lila sang the national anthem. Like Jones, he heaped praise on his wife, Andrea.

"Obviously, induction into the Hall of Fame is one of the greatest honors of my life,'' Thome said. "The best thing, though, that's ever happened to me is the day you agreed to marry me. You are without a doubt the best teammate I could ever have and, with the world as my witness, I love you more today than ever.''

Thome marveled that the genesis of this moment was hitting rocks on a gravel driveway with an aluminum bat as a kid.

"It's been my great privilege to have played the game for as long as I did,'' he said. "And I can say this with certainty, the possibilities are just as important as the outcome. Living the dream that is major league baseball, the best part is not the result but taking the journey with the people whose contributions make it all possible.

"I'm so honored to be part of something so special. Baseball is beautiful, and I am forever in its service.''

Among the many he thanked, Thome praised former Cleveland manager Charlie Manuel, who served as the Indians' hitting coach in the late 1980s and 1990s. Manuel was in the audience.

"He told me I could hit as many home runs as I wanted to," Thome said. "I knew this was someone I could connect with."

Greeted by hundreds of fans waving Dominican Republic flags, Guerrero spoke in his native Spanish in a speech that was translated from Spanish and lasted just five minutes. He thanked his father and mother, who cooked dinners for him and does the same now for his son, and the fans and the people in his hometown of Don Gregorio. His son Vladimir Jr., the top prospect in the minor leagues with the Blue Jays, was in attendance.

The nine-time All-Star outfielder batted .318 with 449 homers and 1,496 RBI and is the first player inducted wearing the cap of the Angels, the team where he enjoyed his greatest success.

Just as he did in his unflappable role in the bullpen during his career as an ace reliever, Hoffman was flawless in delivering his speech, closing it by thanking his wife.

"You shared with me this amazing journey of ups and downs from the beginning, always never letting me get too high or get too low," Hoffman said. "I love you."

Hoffman played the bulk of his career with the San Diego Padres before finishing with the Milwaukee Brewers. After failing to impress the front office in three years as a shortstop, he switched to the bullpen and became a star. Using a stultifying changeup, Hoffman recorded 601 saves over 18 seasons, second all-time to former Yankees star Mariano Rivera's 652.

He credited his parents for his success.

"Mom, dad, you're the biggest reason I'm on this stage," Hoffman said. "In fact, you're all of my reasons. Not a day goes by that I'm not thankful for all both of you have done. I love you both beyond words."

Morris, now 63, pitched 18 seasons for the Tigers, Twins, Blue Jays and Indians, and played on four World Series champions. In the 1980s, he led all pitchers with 2,444.2 innings pitched and 162 wins and topped all AL pitchers in strikeouts with 1,629.

Among those he thanked were his parents and the late Sparky Anderson, who managed the Tigers to the 1984 World Series championship.

"Thank you mom and dad for everything you taught me and have done for me,'' Morris said, his voice cracking with emotion as he looked at his dad. "Mom, I know you're smiling down on us today. Dad, thank you for instilling in me the work ethic that was so vital to my success, but more than that you showed equal love for all your children.

"I know Sparky Anderson is with us today,'' Morris said. "He taught me so many things. He taught me to fight through adversity.''

The crowning achievement of Morris' career was his 1-0 complete-game victory in Game 7 of the 1991 World Series while pitching for his hometown Twins against the Braves. Minnesota manager Tom Kelly wanted to take him out after nine innings and the 36-year-old Morris convinced him not to. Morris also thanked Kelly for that decision.

Trammell and Morris were selected together in December by a veterans committee, which made the day extra special for them.

Trammell, who played shortstop for 20 seasons -- all for the Tigers -- and Morris were selected together by a veterans committee, which made the day extra special for the Motor City.

"We signed together in 1976, spent 13 years together in Detroit, and now 42 years later, Cooperstown. Wow!'' Morris said.

Trammell formed a stellar double play combination with Lou Whitaker, who was in the audience on a special day for Tigers fans and put a plug in for his old teammate.

"For 19 years Lou Whitaker and I formed the longest running double play combination in the history of baseball," Trammell said, recalling the two were called up to the Tigers on the same day. "Lou, it was an honor and a pleasure to have played alongside you all those years. I hope someday you'll be up here, too."

Trammell earned six All-Star Game selections, four Gold Glove Awards and three Silver Slugger Awards. His .977 fielding percentage ranks sixth among shortstops with at least 2,000 games played. During his tenure, the Tigers had one of the great double play combinations in MLB history in Trammell and second baseman Lou Whitaker, who was in the audience on a special day for the Motor City.

Trammell also thanked Anderson, who took over as manager of the Tigers in 1979 after leading the Cincinnati Reds to great success.