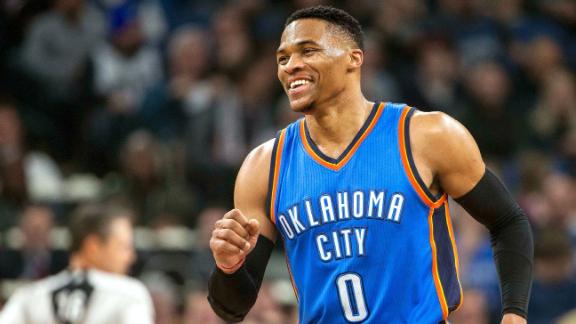 The Los Angeles Clippers were supposed to challenge their hometown rival Lakers as two of the top teams in the Western Conference this season.

It hasn't exactly been smooth for the Clippers, but now that the season is in its final six-and-a-half weeks, Los Angeles is finally starting to round into that form.

The Clippers will look to continue their rise in the West on Tuesday night when they travel to Oklahoma City to take on the Thunder.

The Clippers will enter Tuesday tied with Denver for second in the conference, five-and-a-half games behind the top-seeded Lakers.

"When we're healthy, we can beat anybody," Clippers forward Patrick Beverley told reporters recently. "And it's no disrespect to any other NBA teams out there."

Being healthy, though, has been an issue.

The Clippers have only had eight games all season with a fully healthy roster -- though they have won all eight. Only Ivica Zubac has played in every game for the Clippers, while Kawhi Leonard has missed 13 and Paul George 22 with various ailments.

"I like where we're at," Clippers coach Doc Rivers said. "What I keep saying about our team is because of circumstances, injuries and stuff, we still have a big growth opportunity. And yet we're still winning, so that says a lot of good things about us."

Tuesday's game will be the third of four between the teams this season. They've split their first two, with each team winning at home.

The Clippers didn't have Leonard in either game.

The Thunder are coming off a 133-86 blowout loss in Milwaukee on Friday, one of the most lopsided decisions in the NBA this season and the worst loss in franchise history.

Oklahoma City coach Billy Donovan said he didn't review any film of that loss, instead saying he was focused on moving forward.

"We've got to be better, and we've got to be physical," Donovan said. "So, we really just tried to get on the court and work on those things right away."

The Thunder are expected to have Danilo Gallinari back after he missed Friday's loss with left ankle soreness.

While Chris Paul hasn't generated the buzz that players like Giannis Antetokounmpo have in the Most Valuable Player race, Gallinari said Paul should definitely be in contention for helping the Thunder elevate into the playoff field after dealing away both George and Russell Westbrook in the offseason.

"When you want to define the MVP, I think leadership is one of the first things you need to think about."

The first time the teams faced off in Oklahoma City on Dec. 22, George received a warm welcome after spending the previous two seasons with the Thunder.

Even after his offseason trade to the Clippers -- in which the Thunder acquired second-year guard Shai Gilgeous-Alexander and Gallinari plus draft picks in return -- George's connection with Oklahoma City remains strong.

Monday, George was in attendance for a ribbon-cutting ceremony for a fishing dock his foundation helped build in Oklahoma City.