Clippers marvel at Kawhi Leonard's one-finger block: 'Like it kept growing or something' 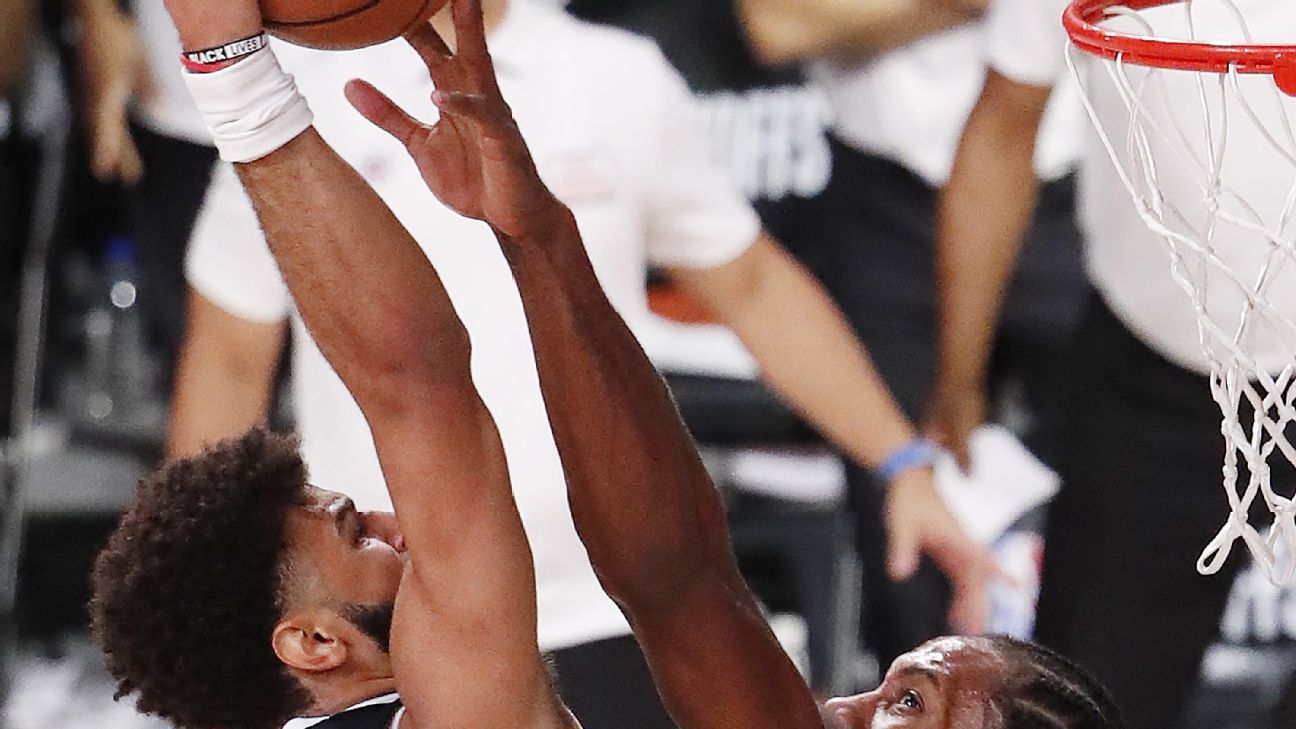 Jamal Murray saw an opening, drove and lifted off, cocking his arm back for a monster dunk -- only to run intoKawhi Leonard's massive left hand.

More specifically, Murray and the ball were rejected by Leonard's left middle finger with less than two minutes left in a six-point game. For much of Game 3, the LA Clippers floated around like a team waiting to turn things on. But when they had to make a defensive stand, Leonard and the Clippers stifled the Denver Nuggets to pull off a 113-107 win Monday and take a 2-1 lead in the best-of-seven Western Conference semifinals.


The Clippers' defense was dominant when it had to be, punctuated by Leonard's highlight block on Murray's dunk attempt. Leonard needed every inch of his middle finger to finish the rejection and protect a 109-103 lead with 1:47 left.

Through the first seven games of the postseason, the Clippers grew accustomed to seeing Leonard dominate offensively, as he scored 29 or more points per game in that stretch. But Denver's defense held Leonard to 13 points in Game 2 and 23 points in Game 3. Leonard impacted Game 3 in other areas, grabbing 14 rebounds and dishing six assists to go with one elite defensive block.

"That play by Kawhi was amazing," Clippers coach Doc Rivers said of his player whose hands measured 9.75 inches long at the 2011 NBA draft combine. "I didn't know it was with one finger. I thought he just blocked it, but it was impressive. I didn't even know where he came from."

While Denver's defense focused on making things difficult for Leonard -- who shot 9-for-19 and just 1-for-6 from 3-point range -- George carried the load offensively for the Clippers. He made 12 of 18 shots and scored 32 points, including connecting on five of seven 3-pointers.

It was George's best game since his 35-point outing in Game 5 against theDallas Maverickshelped him bust out of a three-game playoff slump. George said he was in a "dark place" and battled anxiety and depression during that 10-for-47 shooting slump in Games 2, 3 and 4 against Dallas in the first round.


"I've got to help him," George said of taking the scoring load off Leonard's shoulders. "Kawhi's done more than enough down this stretch. Some nights, it's not going to be his night, and I have to be myself. I have to help him, pull the weight, make plays, make shots.

"Give him credit, getting us this far, but he can't go into every game with that pressure that he's got to be great on both ends."

For the second time in this series, the Clippers smothered Murray into finishing with just five made baskets and fewer than 15 points. Murray shot 5-for-17 overall and 2-of-7 from beyond the arc. He had 14 points and nine assists one game after scoring 27 points in Denver's Game 2 victory.

The Nuggets' point guard, who twice scored 50 points in the first round against theUtah Jazz, went 0-for-6 with George as his primary defender, according to ESPN Stats & Information.

George was everywhere on defense, holding opposing Nuggets whom he guarded to a total of seven points and 3-for-11 shooting. Between Leonard and George, the Clippers' star two-way players held the Nuggets to 1-of-7 shooting in the fourth quarter, according to ESPN Stats & Info.

"Both ends of the floor, Paul really exerted himself, really took a leadership role in this game," said Lou Williams, who had two of the Clippers' seven steals. "I think a lot of our guys felt in that fourth quarter that we didn't want to lose this game."


The Clippers trailed by 12 in the second quarter as Nikola Jokic carved up their defense on his way to 32 points, 12 rebounds and eight assists. But their defense got them back in the game with a 14-4 run to finish the first half.

Denver led by 10 in the third quarter and by a score of 97-90 with 8:29 left in the game before the Clippers' defense came to life again. Denver shot 7-for-22 in the fourth, and Jokic and Murray were held to a total of eight points in the quarter.

Nothing symbolized the Clippers' defensive dominance more than Leonard's middle-finger block in the fourth.

"I just saw him penetrating," Leonard described the play. "... So I stepped up and tried to contest his shot."

Leonard knows that the Clippers have to put forth a more complete game and not rely on their defense to step up in the final minutes.

"I think we need to be consistent throughout the whole 48 minutes, but you got to give Denver credit," Leonard said. "They are a good basketball team. They have been together for a while. They know how to make adjustments on the fly. They got a good coach. It's playoff basketball. But for us, definitely want to see it throughout." 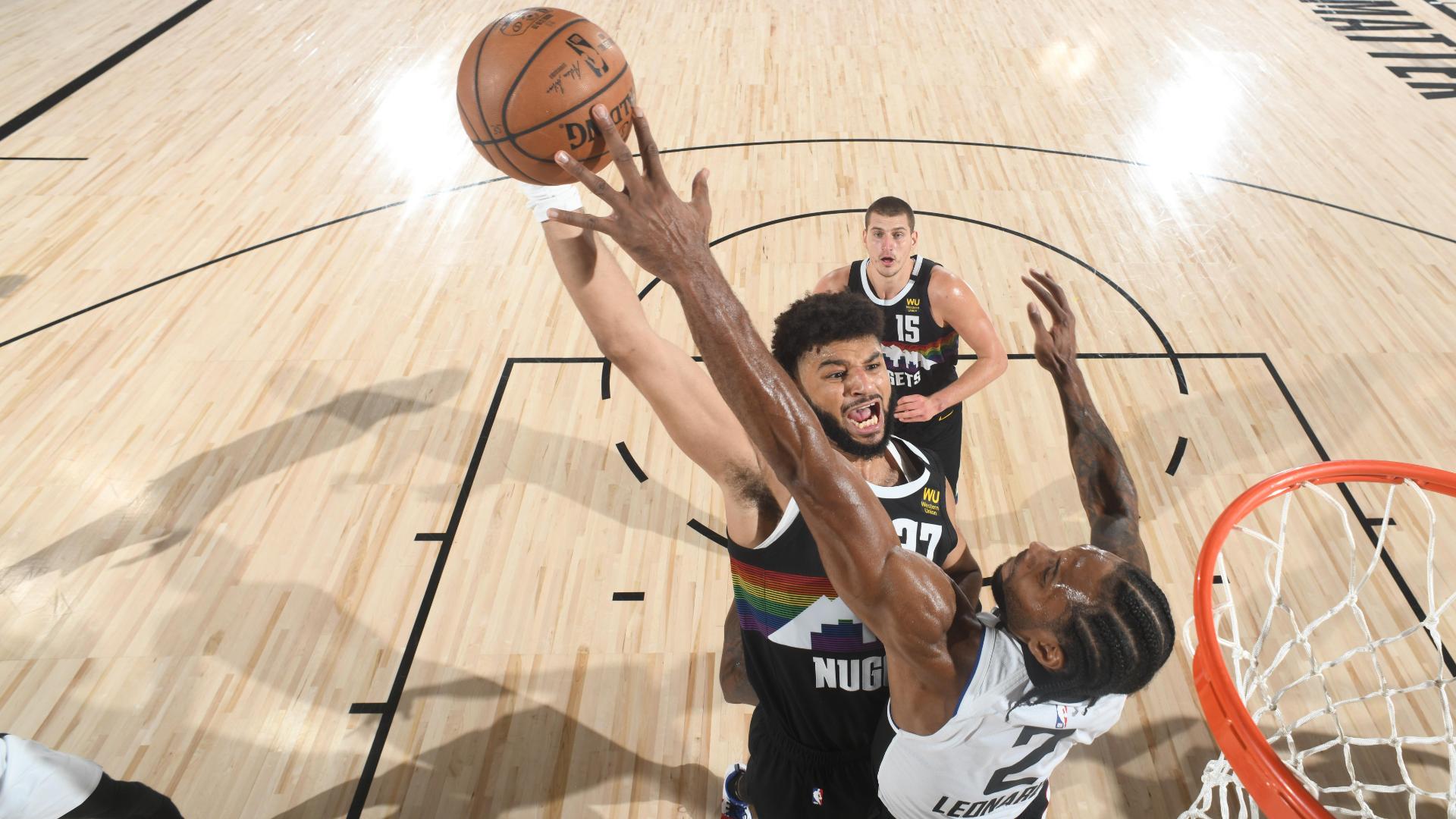