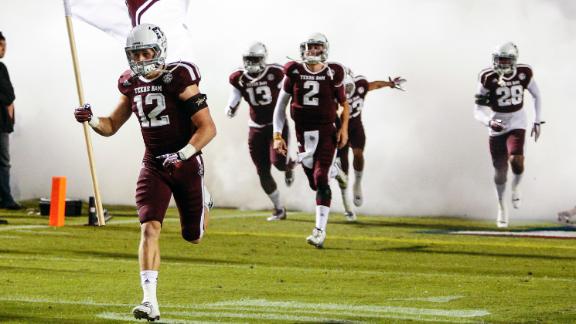 ESPN
By Darren Rovell
Worried about the ramifications of selling the numbers tied to student-athletes, several schools have decided not to sell football jerseys with star players' digits on them this upcoming season, sources tell ESPN.

The Aggies sold thousands of No. 2 jerseys over the past two years thanks to Johnny Manziel, who wore the number, but sources say the only jersey available at retail this year will be the No. 12 -- as in the "12th Man," a jersey the school has sold for years, alongside other numbers.

Northwestern will limit sales to No. 51, which was used by current head coach Pat Fitzgerald during his heralded playing career. Arizona, meanwhile, will only offer No. 14, as in 2014.

"We've been thinking about doing this for a while," said Arizona athletic director Greg Byrne, who wouldn't elaborate any further.

Officials with Northwestern and Texas A&M declined to comment, but college sports insiders have expected a move like this designed to lessen the legal exposure of the schools and change the public perception of taking advantage of college athletes, as they fight harder for their commercial rights.

Northwestern might have been more encouraged to stop selling individual player jerseys, as its football players took a vote in April whether to unionize. The results of the vote, taken in the presence of the National Labor Relations Board, are not yet known.

This past season, Northwestern sold No. 2 jerseys at retail. Quarterback Kain Colter, who organized the union effort along with the Collegiate Athletes Players Association, wore that number.

The state of amateur sports is in flux more than ever before as the Ed O'Bannon trial that begins Monday in Oakland could eventually provide for a free market system for college athletes should the NCAA not successfully defend the case.

Also weighing on the NCAA's minds is the recently approved $40 million settlement in which thousands of college athletes will be paid for their likenesses after video game maker Electronic Arts and licensee CLC used specific references to players without their permission.

As shoe companies started doing multimillion-dollar deals with schools in the mid-1990s, the college jersey market matured. Schools would tell licensees like Nike, adidas and Reebok which players they expected to be their stars, and those companies would then produce jerseys with the numbers associated with those players.

It may have been a fine line, but schools and licensees justified doing this by saying that the school, not the player, owned the number, and no official licensee printed the player's name on the back of the jersey.

As the arms race increased and the pressure to make more revenue grew, the shoe companies encouraged schools to give them specific player numbers to sell.

One of the last schools to buckle was the Florida Gators, which had only offered Nos. 1 and 96 -- the year of their first national championship -- up until 2006, when they added Tim Tebow's No. 15, as well as the numbers of two other players. The Gators, however, have since scaled back to 1, 15 and 96.

In light of the EA/CLC settlement, in which likenesses included hair color and height and not the names of the athletes themselves, administrators have started to worry about their liability.

"Like everything the NCAA and its schools do, it's a day late and a dollar short," said Stuart Paynter, one of the attorneys who represented the players in the video game case.

Nike paid more royalties to schools than any other licensee this past year, according to CLC, which represents the licensing rights of more than 200 colleges and universities.

From a jersey that sells for $60, schools typically make between $3 and $4 in royalties.

Stepping back and going to more generic jerseys is expected to come at a cost. One licensing director at a school in a major conference said that, for schools with marketable players, not having that jersey available could result in a 25 percent decrease in sales.

That could be a drop in the bucket should players whose college jerseys were sold in the past eventually seek to get their piece of the pie.