Curry 3 shoe sales don't hit the mark for Under Armour 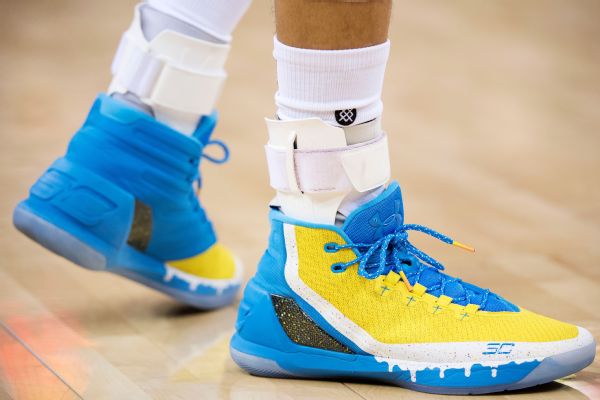 "Our success in basketball hasn't been without its learning," Plank said on the company's earnings call, during which Under Armour reported its first quarterly loss as a public company. "As we launched the Curry 3 late last year, our expectations continued to run high. And while the 3 played very well on court for Stephen Curry and our athletes, a sluggish signature market and a warm consumer reception led to softer-than-expected results.

"This has created an inventory imbalance that we are working through. One that, yes, is baked into our full-year outlook which hasn't changed and, most importantly, yielded lessons we're applying ahead with the Curry 4 and beyond."

The suggested retail price of Curry's playoff shoe, the 3Zer0, went back to $120.

The less-than-enthusiastic reception to the Curry 3 has resulted in several retailers discounting it. To get rid of those that haven't sold, Under Armour has discounted the Curry 3 by almost 30 percent to $99.99.

In November, Under Armour lost nearly $600 million of its value as a company after Foot Locker CEO Dick Johnson said the Curry 3 "started off a bit slower than the previous models."

Thursday's admission by Plank was the first confirmation that the company also wasn't happy with the reception. He said Under Armour will be sharper with future shoe launches "with respect to number of color offerings, scarcity, exclusivity and cadence of launches to drive more consistent engagement and results."

The Curry shoe does present a challenge in that the Golden State Warriors' two-time league MVP wears a sneaker with a higher profile in order to protect his ankle. Nearly 80 percent of the people who wear basketball shoes do so for fashion, and lower-profile shoes are more popular.

Curry wears low-profile versions of his shoes during warm-ups, but those shoes aren't sold in as much volume, nor do they receive the attention that his on-court shoes do.

"We don't like it and we don't accept it," Plank said.