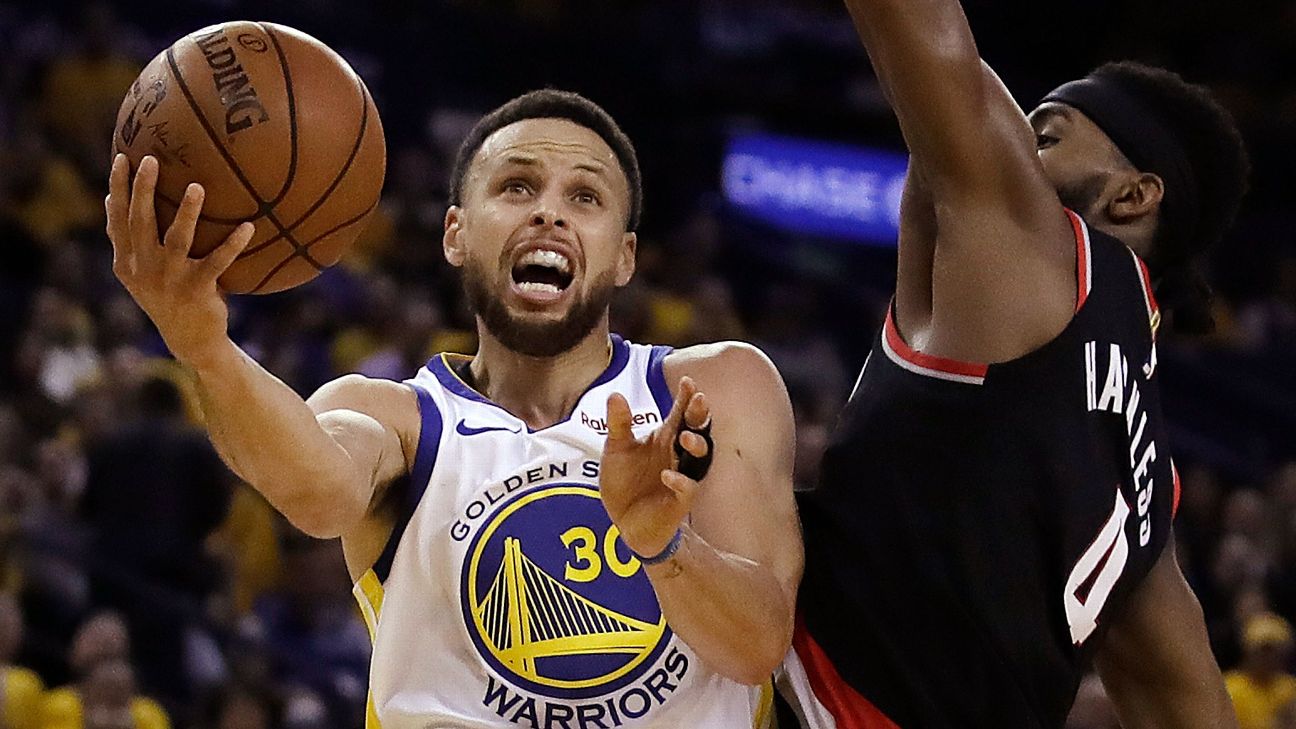 As the Warriors continue playing without star forward Kevin Durant (strained calf), Curry's teammates believe that his 33 second-half points in Game 6 of Friday's series-clinching win at the Houston Rockets helped set the tone for his performance in Tuesday's victory.

"I think it had a huge impact," Warriors forward Draymond Green said. "Just as a player, you want to keep that roll. You try to feed off that momentum from the last game and carry it over, and he came out from the gate aggressive. Also, understanding that Kevin is out and [Curry] is going to be even more important in our offense, and he came out with that mindset and he got it rolling from the gate."

Curry's final line of 36 points, 7 assists, 6 rebounds and a steal marked the 22nd time in his career that he had at least 30 points, 5 rebounds and 5 assists in a postseason game, according to ESPN Stats and Information research. Only Los Angeles Lakers star LeBron James (45) has more since Curry's first playoff appearance in 2013.

"It helped," Curry said of the carryover from his Game 6 effort in Houston. "I know what I'm capable of on the floor, and the situation calls for me to be a little bit more aggressive, and hopefully, that will continue.

"Obviously, it's nice to see the ball go in. I didn't shoot the ball well for four and a half games in the last series and got on to a good start tonight. Want to maintain that. Every game is different. You have to reestablish yourself, and that's my perspective, no matter how I play."

Blazers coach Terry Stotts chafed at the notion that his team should trap Curry more, but the reality for the Blazers is that Curry repeatedly got open looks as the Portland big men dropped lower in coverage.

Curry made more uncontested 3-pointers (seven) than the Trail Blazers (five) did as a team in Game 1.

He took four shots after the defender went under the screen, his most shot attempts in that situation in any game this season. He was 2-for-4, with all of those shots coming on 3s, according to ESPN Stats and Information data.

"Steph got free and had a big night," Warriors head coach Steve Kerr said. "And carried us at times, and obviously, that was a big part of the game.

"I also thought the key stretch for us was the first five minutes of the fourth quarter. You know, they made it a six- or seven-point game to start the fourth. Portland made a really good run at the end of the third, and our bench came in, did a fantastic job getting us the lead back up to about 12 or so, before we went back to our starters. So, great job by our bench."

Curry's performance was even more impressive, given that he did it against his brother, Blazers guard Seth Curry. The pair became the first brothers in NBA history to play against one another in the conference finals.

It's a moment that Stephen didn't take for granted, as he looked up in the stands to see his parents several times during the game. Dell and Sonya Curry sat about halfway up the lower bowl at center court, wearing jerseys that were made up of half of Stephen's No. 30 Warriors jersey and half of Seth's No. 31 Blazers jersey.

"We've been talking about it for the last couple days, about how special it is," Stephen said. "Obviously, we've played plenty of games now on the same court, and you understand what that vibe is like. But on this stage, trying to chase a Finals appearance, it's pretty surreal. I think I caught myself a couple times looking up in the stands at my parents, who did the whole coin-flip thing, and they can't help themselves. So, any time either one of us did something good, they both were clapping. So, they got to fix themselves.

"I told my mom, 'Who are you with?' When I made a shot, I saw her stand up and cheer, and I saw her in all-Portland gear. It's just weird. It's probably more nerve-wracking for them in terms of just trying to get settled into what this series is going to mean." 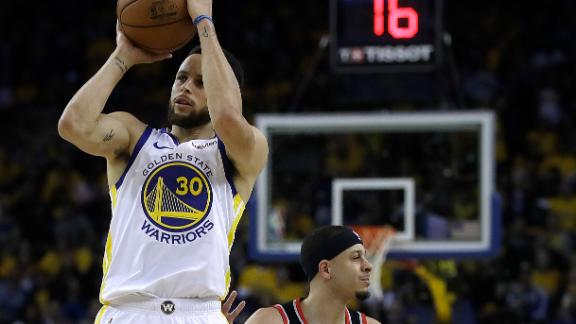