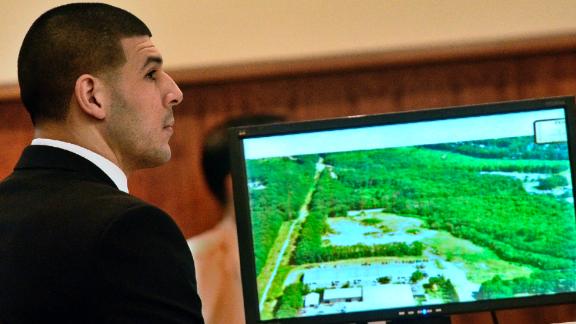 FALL RIVER, Mass. -- The judge overseeing the murder trial of former New England Patriots player Aaron Hernandez has chastised his lawyer for making a joke about Deflategate while questioning a witness in court.

James Sultan was questioning a state police trooper about tire pressure Thursday when he jokingly asked whether the trooper had ever received "training in football deflation devices."

On Friday morning, Superior Court Judge Susan Garsh told Sultan that they are conducting serious business, and she does not expect there to be any more jokes. Sultan agreed and expressed regret.

Hernandez is accused of the 2013 killing of Odin Lloyd, who was dating the sister of his fiance.

The Patriots were accused of using underinflated footballs in their AFC Championship Game win against the Indianapolis Colts. The NFL is investigating.

Jurors were taken on a bus on Friday to several sites in Massachusetts along with a heavy police escort. Hernandez's home in North Attleboro is not far from the industrial park where Lloyd's body was found.

Jurors could be seen getting back on the bus, led there by the judge and court officers, who were holding ceremonial poles that were about 7 feet tall.

Hernandez is not allowed on the tour, but lawyers for both sides and the judge are attending.