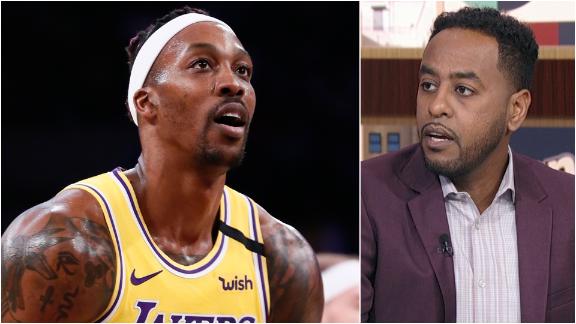 ESPN
Despite missing six-time All-Star Anthony Davis for the previous three games, the Los Angeles Lakers remain one of the NBA's hottest teams. The Western Conference leaders will attempt to extend their nine-game winning streak when they host the Orlando Magic on Wednesday.

Davis, who isn't expected to play against the Magic, has been out with a bruised tailbone since crashing to the court during the team's Jan. 7 win over the New York Knicks. However, the Lakers haven't missed a beat without him, crushing the Cleveland Cavaliers 128-99 on Monday. The win followed an unbeaten two-game road trip with back-to-back wins over the Dallas Mavericks and Oklahoma City Thunder over the weekend, each by 15 points.

Los Angeles' nine-game run is one short of tying its season-high of 10 straight victories and it's the fourth time this season the Lakers have won at least seven in a row.

LeBron James, who sat out the Oklahoma City contest with a chest cold before returning against Cleveland, praised his teammates for stepping up. He was particularly impressed with how they performed against the Thunder without him, Davis and Danny Green.

"They took full advantage of the opportunity, went into a building that is very hard to play, a team that is playing some exceptional basketball, especially at home in OKC, and they went out and pretty much controlled the whole game," James told reporters after scoring 31 points on 12-of-16 shooting with eight assists after the rout of the Cavaliers. "It's great to know that those guys stay ready. That's just our team. No matter what, they stay ready and they're always ready when their name is called, their number is called."

A group defensive effort allowed the Lakers to wipe out a one-point halftime deficit and blow past the Cavaliers 81-51 in the second half.

"Defensively, we got stops and we had great pace," James said. "Even when they scored, we just got the ball out. Having to continue to play with great pace allows us to get into our offense and not go against the shot clock. So, we're playing with a lot of balance, and we were able to connect on some field goals."

Forward Kyle Kuzma, the subject of trade rumors, is averaging 24.3 points over the last three games, including a season-high 36 against the Thunder. Dwight Howard, who finished with 21 points (including his third 3-pointer of the season) and 15 rebounds in 25 minutes against the Cavaliers, averaged 14.3 points and 11.7 rebounds off the bench in those same three games.

Aaron Gordon's three-point play with 1.1 seconds remaining lifted the Magic to a 114-112 decision over the host Sacramento Kings on Monday. Nikola Vucevic scored 26 points, grabbed 15 rebounds and blocked three shots for the Magic, who have won three of their last four.

"It wasn't obviously a perfect game," said Vucevic, according to the Orlando Sentinel. "There were a lot of things we could've done better but at the end of the day a win is a win and you'll take it."

What has changed for Howard this time with the Lakers?
Tracy McGrady and Amin Elhassan explain how Dwight Howard's mindset has changed over the years and why he's having a good stint with the Lakers now.
Report a correction or typo
Related topics:
sportsespnorlando magicnbalos angeles lakers
Copyright © 2020 ESPN Internet Ventures. All rights reserved.
More Videos
From CNN Newsource affiliates
TOP STORIES