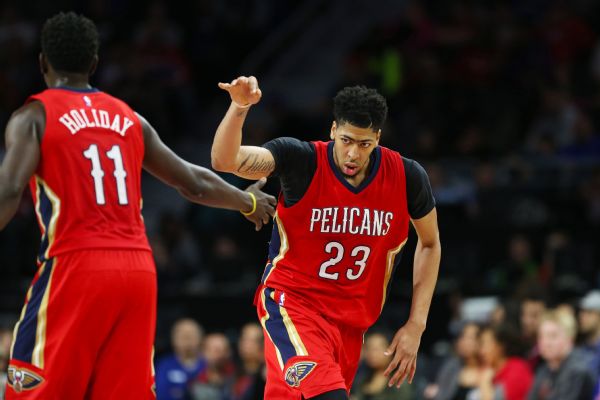 Davis, who signed a five-year, $127 million contract extension with the Pelicans in July, was peppered with questions about his future earlier this week in a conference call with members of the international media in advance of Sunday's All-Star Game in New Orleans.

During the conference call, Davis was asked about possibly teaming up with Oklahoma City Thunder star Russell Westbrook with the Los Angeles Lakers someday. He also was asked whether the Pelicans' slow progress -- they've made the playoffs only once in Davis' four seasons -- would eventually lead him to push for a trade.

"I'm here to help this team win [and] put this franchise back on the map," Davis said Thursday.

The 23-year-old also said he would be "very involved" in trying to persuade free agent-to-be Jrue Holiday to re-sign with the Pelicans this summer.

"I'm doing that right now," Davis said. "I talk to Jrue all the time. He'll make his own decisions, but of course we like him here. ... We need him to continue to play well and then, at the end of the season, hopefully he decides to re-sign with us."

Davis is aware of the Pelicans' well-chronicled pursuit of a scoring big man to play alongside him, with Philadelphia's Jahlil Okafor and Brooklyn's Brook Lopez known to be among the team's targets.

"Our front office is doing everything to improve our team every day," Davis said. "My job's to go on the court and perform very well and [help] the team perform well where we can make that happen."