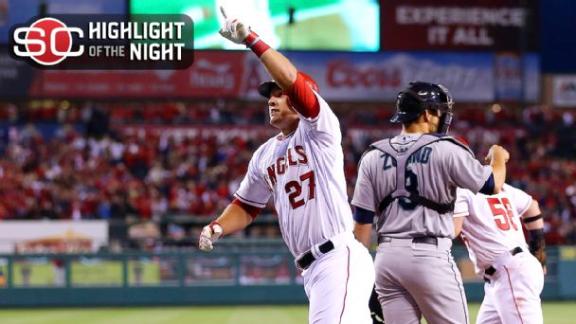 Baylor will have surgery Tuesday on his right femur.

The injury cast a pall over Opening Day at Angel Stadium. Baylor, who joined the Angels' coaching staff in the offseason, had to be helped off the field after squatting to catch Guerrero's off-target throw.

Baylor was taken to a hospital before the Angels' 10-3 loss to the Seattle Mariners.

"Our thoughts and prayers are with Don right now," Angels manager Mike Scioscia said. "Obviously it's a freak (injury). We'll see how it turns out."

Baylor couldn't stand up after Guerrero's throw, his right leg bending awkwardly beneath him while he was held up by Guerrero, who initially thought Baylor was kidding around. Two team employees helped Baylor to the dugout, leaving the Angels in disbelief on the field.

"It got me sick when I was warming up and hearing what happened in the dugout," said Mike Trout, who hit a two-run homer in the first inning.

Baylor, 64, is a survivor of multiple myeloma, a cancer that attacks bone marrow. He was diagnosed with the cancer in 2003, and he is active in fundraising efforts to combat the disease.

Baylor, the former manager of the Rockies and Cubs, left the Arizona Diamondbacks in the offseason to return to Anaheim, where he played six seasons with the California Angels.

Baylor and Guerrero are the only American League MVPs in Angels franchise history. Baylor won the award in 1979 during arguably the best season of his 19-year major league career with seven teams.

Guerrero threw the ceremonial first pitch to celebrate his retirement with the Angels on a one-day contract.