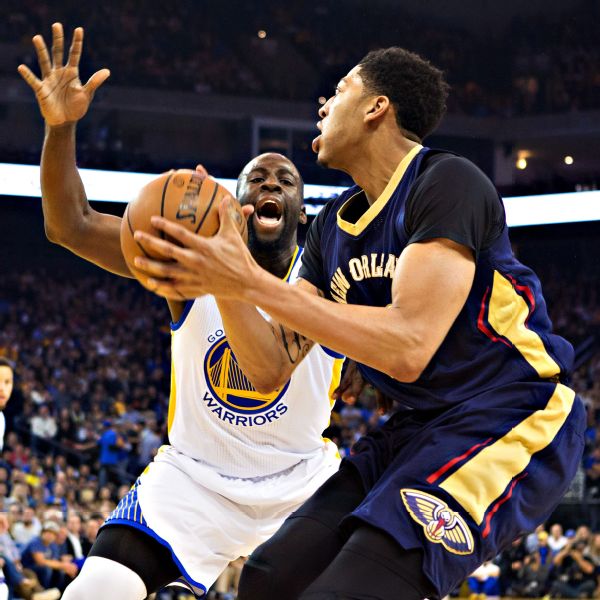 OAKLAND, Calif. -- James Harden appears to be the front-runner to snag his first MVP award, but Draymond Green warns that Anthony Davis could be the individual who prevents the Houston Rocketsguard from securing the hardware, an award that he was runner-up for in two of the past three years.

Davis is averaging 28.3 points, 11.2 rebounds, 2.4 assists and 2.2 blocks this season. His dominance in the absence of All-StarDeMarcus Cousins, his frontcourt teammate,has raised eyebrows.Cousins was sidelined for the remainder of the season with a ruptured Achilles tendon on Jan. 26.

The New Orleans Pelicans have reeled off 10 consecutive victories, leaving a favorable impression on the Golden State Warriors' defensive stalwart.

"Houston is having a good [season], but I'm most impressed with New Orleans," Green said after shootaround on Thursday. "With some of the games they won, with some of the numbers that AD has put up, has been incredible and they're doing that without DeMarcus. I think there was kind of a consensus around the world that once DeMarcus went out, that they'd struggle, and yet, AD is putting them boys on his back ...That's impressive."

Davis suffered a sprained left ankle Wednesday night against Sacramento and is listed as doubtful for Friday's game against Washington.

Harden came in second place for MVP in 2015 and 2017, behind Warriors sharpshooter Stephen Curry and Oklahoma City Thunder guard Russell Westbrook respectively. The 2014-15 campaign was Curry's official coming-out party of entrenching himself among the league's elite.

Houston currently owns the best record in the NBA at 51-13 and is on a league-high 17-game winning streak. As of now, it seems as if this year's honor is still Harden's to lose -- he leads the NBA in player efficiency rating at 30.21, while Davis is second at 28.90 and LeBron James is third at 28.19 -- but Green says Davis is making his case.

"If [New Orleans] keeps winning at the rate they're winning and he keeps playing at the rate he's playing, who knows what happens," Green said. "What I will say is, James has been second two times. And both of those years, he's lost to like historic seasons. The season of Steph's year, Steph was just off the chart. And then Russ had like 57 triple-doubles last year. The two years that he's come in second, he's lost two in like these historical years.