Eric Reid 'completely fine' with teams shunning him over protests 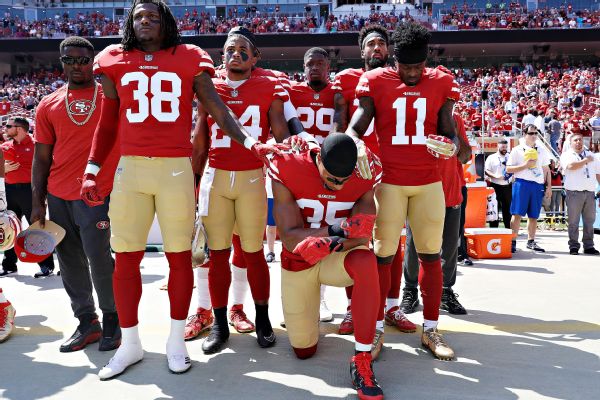 Now, as Reid closes in on becoming an unrestricted free agent this offseason, he has prepared himself for the possibility that teams will not sign him because of his participation in protests of racial inequality.

Asked Friday if he is concerned that his decision to kneel alongside Kaepernick during the national anthem last year -- and to continue the protest this season -- could hurt his free-agent prospects, Reid gave an alternate view.

"I wouldn't use the word concerned," Reid said. "I would say I understand that's a possibility. And I'm completely fine with it. The things that I've done, I stand by, and I've done that for my own personal beliefs. Like I said, I'm fine with whatever outcome happens because of that."

Asked if he thinks teams will ignore him for protest-related reasons, Reid acknowledged that he has considered that outcome.

"It's a possibility," Reid said. "There are probably teams that won't want to talk to me because of it. I'm hopeful that I will be on a team next year, but if not, again, that's OK with me."

In 2016, Reid was the first player in the league to kneel alongside Kaepernick, first joining him before a preseason game in San Diego after meeting with Nate Boyer, the former Green Beret and NFL long-snapper, to discuss potential protests that might be more respectful than sitting down during the national anthem.

From there, Reid knelt alongside Kaepernick and linebacker Eli Harold for the entire season. Before this season, Reid decided he would go back to standing during the anthem, but racially charged unrest in Charlottesville, Virginia, in August made him reconsider.

Reid began kneeling again before the team's third preseason game Aug. 27 in Minnesota. He has continued to kneel throughout this season and has spoken out passionately against systemic oppression on multiple occasions.

Along the way, Reid has also found a home at strong safety in first-year coordinator Robert Saleh's 4-3 defense. Charged with playing the position -- which asks him to spend much of his time near the line of scrimmage -- for the first time, Reid has repeatedly said how much he likes his role.

"I trust my ability to play in any defense," Reid said. "I do like playing strong safety. It's my first year playing it; I really enjoyed it."

The 49ers are projected to have more than $100 million in cap space this offseason, meaning they could afford to bring Reid back. Complicating matters is the strong performance of safety Jaquiski Tartt, who had earned the strong safety job when Reid missed three games with a left knee injury early in the season.

When Reid returned, the Niners moved him to linebacker briefly before he went back to strong safety because Tartt suffered a season-ending arm injury in a Week 9 loss to Arizona.

For the season, Reid has 61 tackles, a fumble recovery and two interceptions in 12 games.

Niners coach Kyle Shanahan said Friday that he has had no discussions with any of the team's pending free agents, though some of those meetings could come Monday after San Francisco's season ends.

"We possibly could on Monday, either [general manager] John [Lynch] or myself," Shanahan said. "I'll talk to a number of guys. I know I'm not going to get through everybody in one day. We'll deal with that when the season ends, though."

Reid acknowledged that Sunday's game against the Los Angeles Rams could be his last with the 49ers, the team that picked him No. 18 overall in the 2013 NFL draft. But he also made it clear that his focus for now is on finishing strong before looking ahead to an uncertain offseason.

"I have had a lot of talks with my wife about it, just the uncertainty and also the possibilities," Reid said. "But like I said, at this point it's all hypothetical. I'm still a 49er, I've still got a game to play, I've still got a job to do. That's what I'm going to worry about."
Report a correction or typo
Related topics:
sportsespnsan francisco 49ersanthemfree agencynfleric reidprotest
Copyright © 2020 ESPN Internet Ventures. All rights reserved.
More Videos
From CNN Newsource affiliates
TOP STORIES