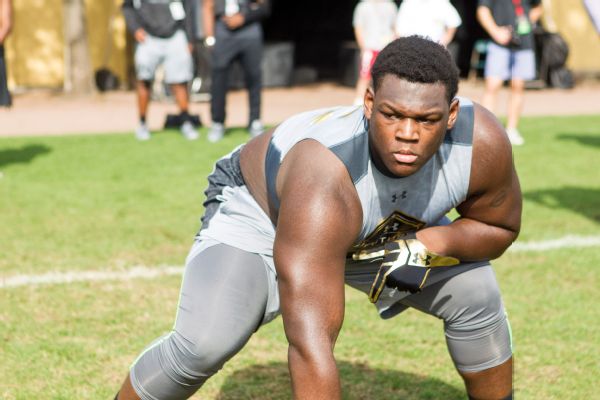 Isaiah Wilson, the second-ranked player in the ESPN 300, committed to Georgia on Friday.

Dressed as a holiday elf, the 6-foot-7, 351-pound offensive tackle from Poly Prep Country Day School in Brooklyn, New York, announced his decision at a ceremony held at his school. The announcement was also streamed on Facebook Live.

The five-star Under Armour All-American chose the Bulldogs over Michigan and Alabama.

After Wilson visited Michigan in November, speculation arose that the Wolverines were the team to beat, but Wilson's official visit to Georgia this past weekend was enough to shift the momentum toward the Bulldogs.

Wilson made his announcement official by unwrapping a gift with a Georgia hat inside.

The Bulldogs are third in the Recruiting Nation class rankings, just behind Ohio State and Alabama.

With the addition of Wilson, Georgia now has 19 verbal commitments, including 16 ranked in either the ESPN 300 or the ESPN JC 50.