Flip Saunders says he has lymphoma 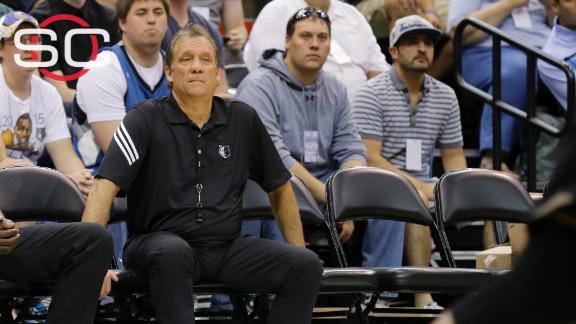 MINNEAPOLIS -- Flip Saunders had quite a challenge on his hands when he returned to Minnesota two years ago to take over the moribundTimberwolves.

Just as it appeared the franchise was starting to turn the corner, a new challenge has presented itself. And he plans to take this one on with as much determination and confidence as he has any other.

Saunders announced Tuesday that he is being treated for Hodgkin lymphoma, and his doctors consider it "very treatable and curable."

Saunders was diagnosed with a cancer of the immune system two months ago and has been undergoing chemotherapy. He plans to remain the Timberwolves' head coach and top executive while being treated.

"I am attacking this with the same passion I do everything in my life, knowing this is a serious issue," he said in a statement issued by the team. "I also know that God has prepared me to fight this battle."

The 60-year-old Saunders returned to the Timberwolves as team president in 2013. Last year, he replaced the retired Rick Adelman on the bench and the team finished 16-66.

Even while undergoing treatment, Saunders remained active with the team, overseeing draft workouts, selecting Karl-Anthony Towns at No. 1 overall and trading for Tyus Jones on draft night in June. He signed players including Euroleague MVP Nemanja Bjelica and veteran point guard Andre Miller to supplement a roster teeming with young talent.

He didn't attend the Las Vegas Summer League but has remained engaged and at the team's new practice facility throughout the summer. Doctors have encouraged him to keep up with his daily business.

"Flip has kept me apprised of his cancer diagnosis and treatment," owner Glen Taylor said. "He has my support as well as my thoughts and prayers for him and his family."

As team president, head coach and a minority owner, Saunders has carved out a nearly unprecedented amount of power within the organization. His influence can be seen from the construction of the roster, the return of franchise icon Kevin Garnett and the drum line occasionally used during pregame introductions.

He will no doubt lean on his coaching staff -- Sam Mitchell, Sidney Lowe, Ryan Saunders (Flip's son) and David Adelman -- as well as a front-office team that includes general manager Milt Newton. But the organization doesn't expect the diagnosis to get in the way, especially given that he has almost two months before training camp begins.

"It was emotional for me when Flip informed me of his battle as I consider Flip a very good friend who I love like a brother," Newton said. "My family and I will support him and his family in any way we can. We will pray for his complete recovery and support him to the fullest."

Saunders started informing friends about the diagnosis a few weeks ago and has since come to peace with the path ahead. He remained confident that he will be ready for training camp in October and healthy enough to handle the grind of the 82-game season that awaits.

"I am taking it step by step and day by day to understand how to best manage this process," Saunders said.

The formerUniversity of Minnesotastandout coached the Timberwolves for 10 years before being fired in 2005, leading the long-suffering franchise to its only real playoff success. Taylor brought him backas team president two years ago to try to get the organization back on track, and he's helped infuse the roster with promising young players, including Towns, Andrew Wiggins, Zach LaVine and Shabazz Muhammad, while convincing Garnett to sign a two-year contract.

The moves have energized a fan base that hasn't had a team in the playoffs since 2004, and Saunders made it clear he has no plans of slowing down.

Twinsmanager Paul Molitor went to college with Saunders at Minnesota and extended some well wishes before his team played theTexas Rangers.

"I certainly will be thinking of him and pulling for him," Molitor said. "He's got a lot of fight in him."