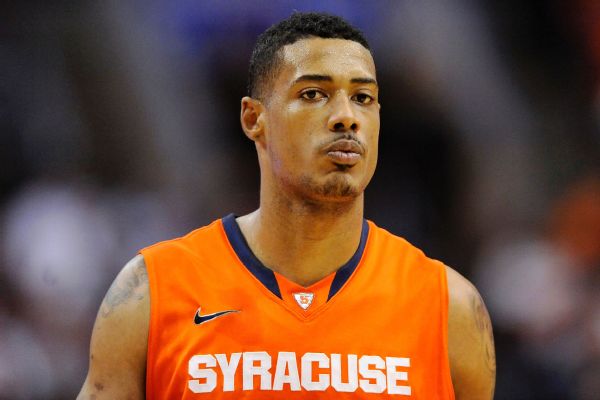 Melo was found dead at his home in Juiz de Fora, in the state of Minas Gerais, Military Police in Brazil confirmed. Melo went to bed on Friday night and was found dead Saturday morning by his mother, authorities there said.

There was no immediate word on cause of death.

Melo, 26, was playing professionally in Brazil, as he had been the past few years.

"We don't know the cause yet. It's so hard right now, so hard to believe. It's a sad, sad day. He was a really good kid, and it's not fair that he will be defined by one thing: a 10-page paper," a shaken Syracuse coach Jim Boeheim told ESPN. "He worked his tail off to become a really good player and was a nice kid.

NCAA's investigation of Syracuse academic program included the legitimacy of a paper that Melo wrote while at school.The NCAA suspended Boeheim for nine games and imposed harsh sanctions to Syracuse as the result of that investigation.

Melo spent two seasons playing for Boeheim at Syracuse and was part of the Orange team that went 34-3 and 17-1 in the Big East in 2012.

Melo averaged 7.8 points, 5.8 rebounds and 2.9 blocks in the 2011-12 campaign. He was suspended twice during the season -- once for three games during the regular season and again for the NCAA tournament due to academics. Melo's academic eligibility was also part of the NCAA investigation in which the Syracuse program self-imposed a postseason ban for the 2014-15 season.

The Celtics selected Melo with the No. 22 pick in the 2012 draft, one spot after they landed Jared Sullinger.

While Sullinger emerged as a key contributor for the Celtics, Melo is remembered as one of Boston's first-round whiffs. Melo logged just 36 minutes in six appearances during his rookie season and spent much of the year with the Maine Red Claws of the D-League.

Celtics president of basketball operations Danny Ainge wrote on Twitter that he was "saddened" to learn of Melo's death.

The Celtics traded Melo to the Memphis Grizzlies in August 2013, and he was waived soon after. Melo signed with the Dallas Mavericks before the 2013-14 season but was waived before the start of the regular season.