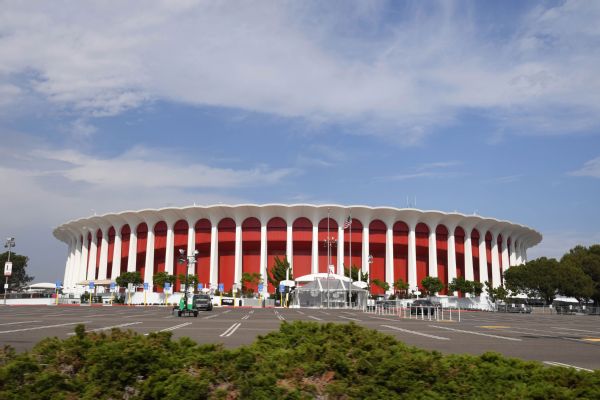 ESPN
By Ramona Shelburne
The owner of the Inglewood Forum filed a lawsuit in California Superior Court on Monday against the City of Inglewood and its mayor, James T Butts, alleging that they held secret negotiations with the LA Clippers about building a new arena adjacent to the Forum and the site of the Los Angeles Rams' future home.

The Forum has been owned and operated by Madison Square Garden since 2011. The company invested some $100 million in redeveloping the property in cooperation with the city, with a contractual agreement that the city would not attempt to attract another concert venue that would damage the Forum's core business.

The suit alleges that Inglewood and its mayor breached their contract with the Forum when it entered into secret negotiations with the Clippers regarding 15 acres of property -- which had been leased by the Forum for overflow parking -- in January 2017.

The Forum had leased the land, with an option to buy it as part of its original development agreement with the city. The suit alleges, however, that in January 2017, Butts began pressuring the Forum to terminate its parking lease agreement so he could develop a "technology park" on the space. The suit alleges that Butts began asking the Forum to use his personal email and cellphone accounts to avoid a paper trail on these talks.

The suit alleges that in March, Butts told the Forum he had a major tenant "on the hook" and ready to commit to the technology park, but that he was actually negotiating with the Clippers at that time, in breach of the contractual agreement.

In June 2017, the Clippers and the City of Inglewood entered into an exclusive negotiating agreement to develop the 15 acres that had been previously used as overflow parking for the Forum. In the city release on the ENA, Butts said he began negotiating with the Clippers in January. The suit alleged Butts never disclosed that to the Forum, instead saying the site would be used for a non-competitive technology park.

In February 2018, a proposed environmental impact report for the Clippers' new arena published by the city indicates the arena will hold 100-150 "family shows, concerts, conventions and corporate events" each year. The suit alleges that is a breach of Inglewood's contract with the Forum as the proposed new Clippers arena is less than a mile and a half from the Forum.