Fox, Mitchell, Simmons or Tatum: Which super soph would NBA execs build around? 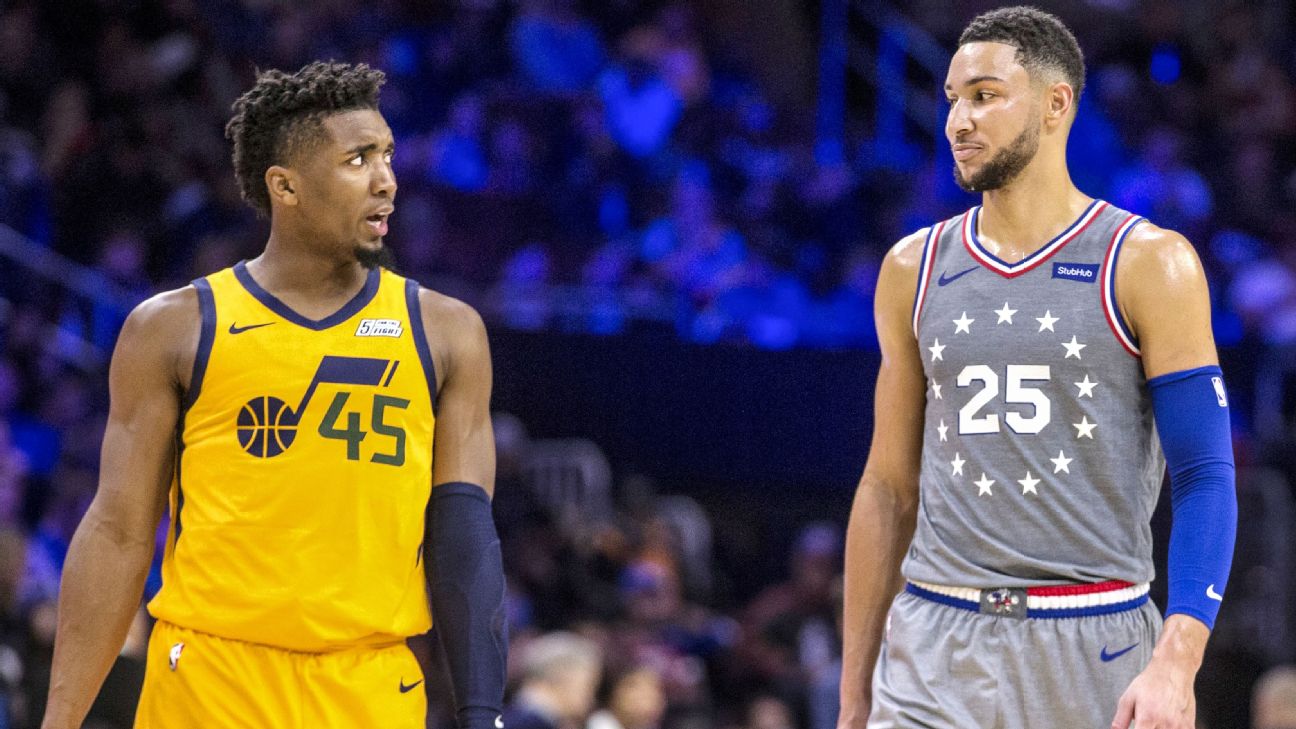 As Ben Simmons, Donovan Mitchell and Jayson Tatum worked their way through three of the most impressive rookie seasons in recent memory, the debate raged over which of them was the best talent to build around.

That three-horse race was competitive enough. But once De'Aaron Fox helped lift the Sacramento Kings into the playoff chase this season with a remarkable sophomore campaign, a fourth very worthy challenger was thrown into the mix.

As the young stars' respective sophomore seasons wind down, ESPN asked 18 coaches and executives from across the league the same question: Given the choice, how would you rank Simmons, Mitchell, Tatum and Fox moving forward?

It was a question that sparked lively debates, painful choices and, ultimately, a range of opinions. Here is what we found:

It likely won't come as a surprise that the results from this survey mirror the 2018 Rookie of the Year results, with Simmons first, followed by Mitchell, Tatum and Fox. The way the votes broke down provides further insight into how each player is viewed by people around the league.

The most divisive player among the four was Simmons. While he got half of the first-place votes, he finished third on six ballots. The divide in where he was placed came down to the same thing every time: his shooting.

For those who could overlook the one rather obvious flaw in his game -- Simmons has yet to make an NBA 3-pointerand has attempted just 15 of them in 154 career games -- he often was the runaway choice as the top pick on this list.

"Simmons is in his own class," one Eastern Conference executive said, "because of his size and passing ability, plus his defense. Having the ability to control the game at both ends is really valuable."

On the other hand, those who had Simmons farther down the list thought that what happened to Simmons during last year's playoffs -- particularly against the Boston Celtics, who took advantage of his lack of shooting to cramp his spacing -- was too big a flaw to put him at the top.

"Simmons doesn't shoot," one West executive said. "If you're a championship-caliber team, non-shooters can't be on the floor."

Mitchell finished with an even distribution of first-, second- and third-place votes, demonstrating the belief around the league that theUtah Jazzstar has established himself as a go-to scorer and lead guard, both in the regular season and the playoffs.

"He can handle and pass, make big shots and compete on defense," an Eastern Conference coach said. "He's ahead of those [other] guys right now."

Mitchell and Tatum were next to each other on most ballots, as voters agonized over whom to put higher.

The divide over Tatum's ranking came down to his ceiling. For some, the way he played in the postseason -- when he went toe-to-toe with LeBron James at times during the Eastern Conference finals, as Kyrie Irving and Gordon Hayward were out with injuries -- was a sign of his having plenty of room to grow into a true superstar.

"I think it's from a value standpoint," one East executive said. "I think there are less Tatums than Mitchells -- 6-foot-8 primary scorers on teams than 6-foot-2 ones."

"Tatum is, overall, the most well-rounded," another said.

At the other end of the spectrum, though, are those who see a very nice player -- but one who ultimately isn't going to be the leader of a championship contender. They argue that Tatum might already have reached his peak and might not have a lot of growth left in his game.

"Tatum might be Carmelo [Anthony]," one West executive said. "He needs the ball in his hands."

"Tatum is a complementary player," an East executive said.

Still, others said Tatum's situation -- playing on a Celtics roster featuring an egalitarian system under Brad Stevens, with a proven scorer and closer alongside him in Irving -- makes his future the most difficult to gauge among these players.

Although Fox finished behind the other three in the voting, people had more to say about the Kings guard than anyone else. He wouldn't have been in this conversation at all after a rough rookie season, which saw him shoot 41 percent from the field and 30 percent from 3-point range.

But as the Kings have been one of the league's biggest surprises this season, Fox has earned a ton of admirers for his play. Several voters argued that long term, his ceiling might be the highest of the group.

"I think Fox has the clearest path to joining Simmons on the clear All-Star level," one East executive said. "He certainly has the most easily identifiable elite skill, which is he is f---ing fast."

"Fox is unbelievably explosive," one West executive said. "He's getting game-planned night in and night out. He has the star power behind him. He has the biggest potential to get to the franchise [player] level."

Ultimately, Fox wound up last on the list for the simple reason that he started so far behind the group coming into the season. While few think he will regress to his rookie-year form, it came up repeatedly among voters that they'd like to see more of him before placing him higher.

"Seeing his development from Year 1 to Year 2, there's a chance he can even jump higher," one East executive said. "He does have the clutch gene, and he isn't afraid. I'm just not sure I'm buying him yet." 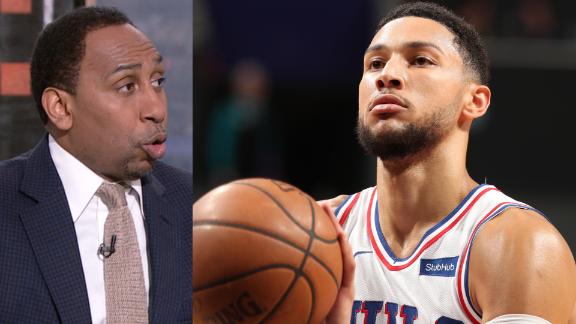 Stephen A.: Simmons is costing Sixers a championship
Stephen A. Smith isn't fazed by the Sixers' victory over Boston and says Ben Simmons' lack of a jump shot could cost his team a title. 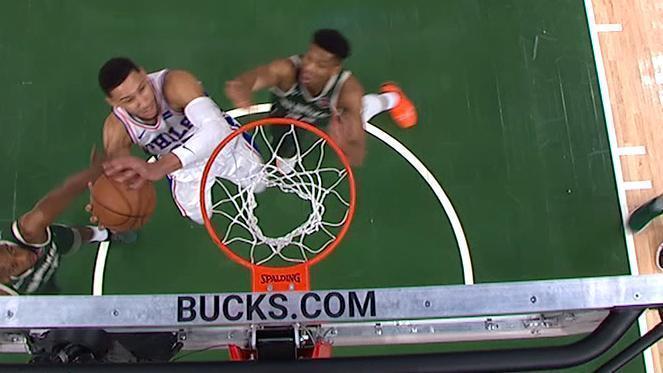 Simmons flies in for putback dunk
Joel Embiid is off the mark on a short jumper, but Ben Simmons storms in for a two-handed putback dunk while drawing a foul. 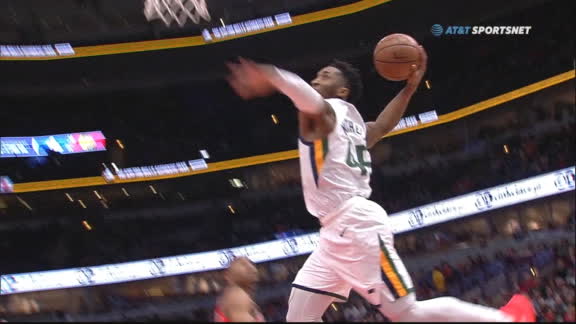 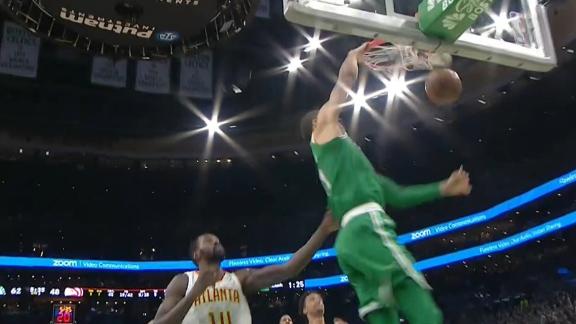 Tatum throws down jam in transition
Trae Young's driving attempt is swatted away by Marcus Smart, and Jayson Tatum gathers the loose ball to throw down a flush on the break. 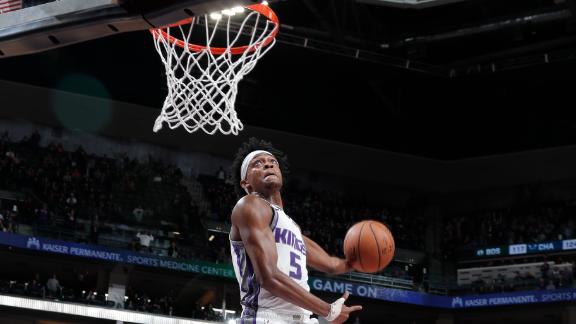