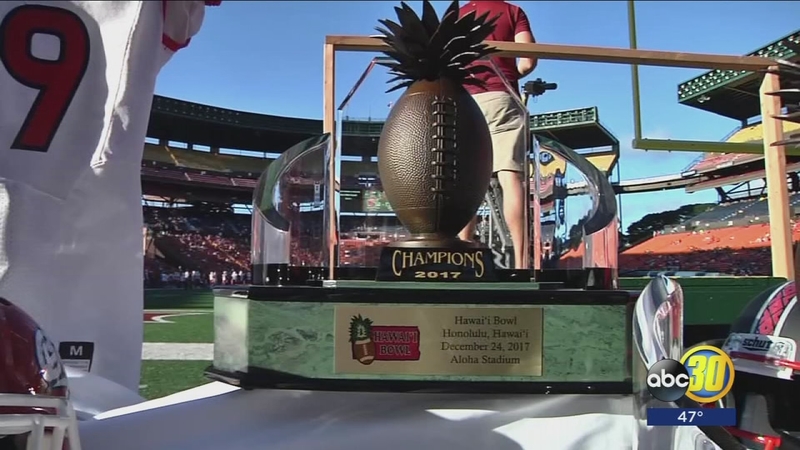 The Dogs became just the 2nd team in FBS history to lose at least ten games one season and then win at least ten the next.

Last year's 1-11 the worst in school history and now 10-4. And Fresno State did it at a place where they never enjoyed success.

The Dogs were 0-2 in their previous Hawaii Bowl trips in 2012 and 2014 and it looked like it would be another loss early on against the Cougars.

But Dinuba grad, Marcus McMaryion led the way for the Bulldog Offense along with kicker Jimmy Camacho. And an interception by Jaron Bryant returned for a touchdown sealed the deal for the Dogs at Aloha Stadium.

The Fresno State football team completed an amazing turnaround season capped off with a Hawaii Bowl win against Houston in Honolulu.

Dogs have not had the best of times in their previous two trips to Aloha Stadium. Fresno State got blown out in 2012 & 2014 hoping 3rd times the charm vs Cougars

1 -- Houston's 2nd drive of the game -- a flea flicker. D'eriq King goes deep and connects with Steven Dunbar -- he'd be officially called down just shy of the touchdown -- Cougars would score to make it 7-0 -- Dunbar finished with 10 catches for 197 yards.

2 -- Marcus McMaryion had 342 yards in the air but it was his effort on the ground Sunday. Quarterback dive at the goaline tied the game at seven early 2nd quarter. Dogs led 13-10 at halftime thanks to a Jimmy Camacho field goal -- he had 4 Sunday!

5 -- And then this was the play of the game Robert Stanley gets a paw on the pass -- Jaron Bryant gets it and takes it back the other way. Great hands, better feet -- 44 yards to the house.

Dogs hold on to beat the Cougars 33-27. Season turnaround complete.

What a difference a year makes from 11 losses a year ago to 10 wins this season. Head Coach Jeff Tedford and his Bulldogs have brought the program back to what both the players and Red Wave expect culminating in a 33-27 win over Houston in the Hawaii Bowl.

Coach Tedford said, "It was a back-and-forth game. Our guys aren't going to give up, they're going to keep competing hard like they always do."

"Yeah, it was a big win. It's exciting. I mean, I want to get in there and celebrate with my teammates. It's a great experience to get back on the plane. Get on this long flight and to be able to have smiles on our faces," McMaryion said.

Jaron Bryant said, "We went from a selfish team to playing for one another. And for the guy next to you. Do it for the seniors."

"It's a total team effort. And everybody bought in and everybody went really, really hard. The staff did a great job. I can't say enough about these guys because they did it with class and integrity. I've enjoyed very single day with these," Coach Tedford said.