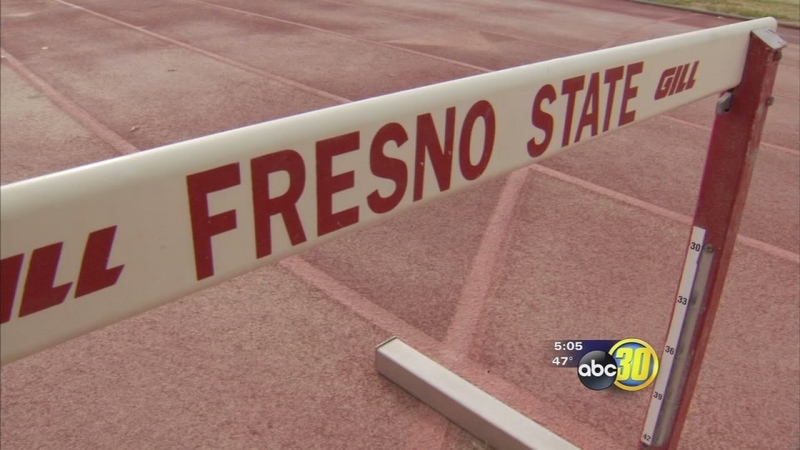 Warmerdam Field opened way back in 1976. The old balding track has long been in need of replacement. Many valley high schools have much better tracks. For former Fresno State track and field coach Bob Fraley it has been a marathon wait. Fraley explained, "It was needed in the latter part of the 90's. It's just took a lot of time."

Warmerdam was last resurfaced in 1989. Fresno State has been using Buchanan High's track for competition.

Athletic director Jim Bartko said it was time for an upgrade. Bartko noted, "If you went out there and walked it you would understand it's just concrete and it's not safe. For us to have a division one program to have the kids out there wasn't appropriate."

Bulldog track and field athletes like Melissa Price have left their blood, sweat and tears on this track. But the old synthetic surface has been breaking down.

Fraley said, "Now I understand that the lead has started, they waited so long that the lead is coming through which makes it very dangerous."

Fraley credited the current administration for getting the project on the fast track. "I think the difference is in the attitude of the administration. That's why I was so pleased when President Castro came aboard." Bartko added, "We looked at it and felt it was important for us before we started doing money into a football stadium. We've taken care of lacrosse and soccer."

In the past track and field has not been a priority but the program has overcome its final hurdle. Fresno State finally on the right track. The makeover should be done this summer.

Bob Fraley retired in 2008. He chose not to receive a paycheck his last five years to help keep the track program afloat. Scott Winsor is the current head coach at Fresno State.