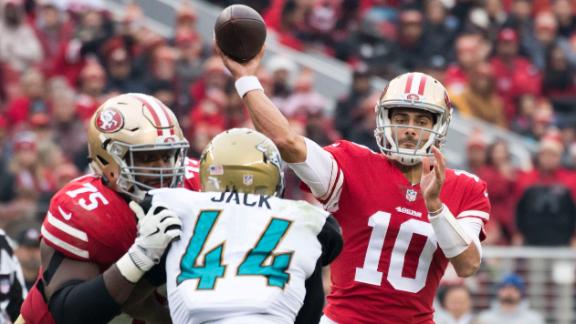 SANTA CLARA, Calif. -- Jimmy Garoppolo threw two touchdown passes and ran for a third score against one of the NFL's stingiest defenses and the San Francisco 49ers won their fourth straight behind their new quarterback, beating the Jacksonville Jaguars 44-33 on Sunday.

The day wasn't a total loss for the Jaguars (10-5), who clinched their first division title since 1999 earlier in the afternoon when Tennessee lost at home to the Rams. But the defeat dealt a big blow to Jacksonville's hopes for a first-round bye. The Jaguars need to win next week and hope Pittsburgh loses twice to get a bye.

The 49ers (5-10) saw their playoff hopes die a long time ago during an 0-9 start but the mood and play around the team changed dramatically after Garoppolo was inserted into the starting lineup earlier this month following a midseason trade from New England.

He has led San Francisco to four straight wins but this one might have been the most impressive, considering the quality of Jacksonville's defense. The Jaguars came into the game having allowed the fewest points and yards passing in the league, while recording the most sacks.

Garoppolo carved Jacksonville up, completing 21 for 30 passes for 242 yards with TD throws to George Kittle and Trent Taylor as San Francisco pulled away in the second half. Garoppolo improved to 6-0 in his career as a starter.

Blake Bortles threw three interceptions for the Jaguars, including one returned for a touchdown by Dontae Johnson in the first half, after going three straight weeks without one in the best stretch of his career . Bortles threw for 382 yards and two touchdowns but it wasn't enough for the Jaguars.

Garoppolo got San Francisco off to a fast start by completing five of six passes for 75 yards on the opening drive that was capped by his 1-yard TD sneak . That marked the first time the Niners scored a touchdown on their opening drive since Dec. 11, 2016, against the Jets and the first time Jacksonville allowed one this year.

San Francisco scored on its first two drives, leaving the Jaguars frustrated on the sideline. Defensive lineman Malik Jackson and cornerback Aaron Colvin got into a heated argument near the bench that eventually was broken up by teammates. Jacksonville then committed two personal fouls by Myles Jack and Yannick Ngakoue on a TD drive in the second half. Jackson then committed a personal foul with 1:43 remaining to give the Niners a first down.

The 49ers appeared in control when Dontae Johnson returned a deflected interception 50 yards for a TD to put San Francisco up 16-0. But the Jaguars blocked the extra point attempt and Colvin returned it for two points. Bortles then led two straight touchdown drives to close the half, while Garoppolo was intercepted in the end zone by Barry Church after getting hit on the pass to leave the game tied at 16 at the half.