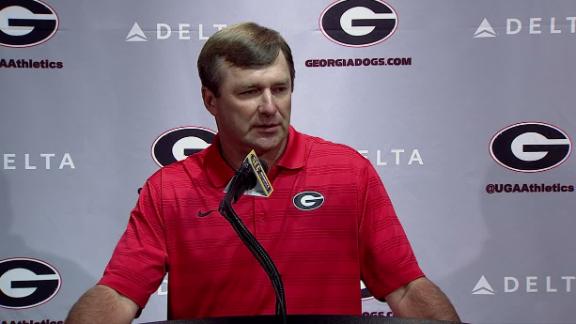 ATHENS, Ga. -- Georgia running back Nick Chubb has been cleared to play in the 18th-ranked Bulldogs' season opener against No. 22 North Carolina inside the Georgia Dome on Saturday.

"He's been cleared," coach Kirby Smart said during his weekly news conference Monday. "It's a situation where he's scrimmaged and done live things. Had a lot of practices where he's carried it more than five or seven times. We feel good about Nick, he feels great, and he's ready to go. He won't technically be on a pitch count by any means."

Chubb has been ahead of his rehab schedule for months since he damaged several knee ligaments when he went down awkwardly on his first carry against Tennessee in October. The junior, who has rushed for 2,294 yards and 21 touchdowns in less than two full seasons of work, will return from his horrific knee injury less than a year later.

He averaged an SEC-high 8.1 yards per carry last season and had a string of 13 straight 100-yard rushing games before his injury.

"Me looking at him, he's ready," Hawkins-Muckle said. "... He's even more physical than he was before. Nick Chubb's always been a hard runner. ... He's an even harder runner [now]."

While Chubb's status for Saturday's game is confirmed, backup Sony Michel's availability is still up in the air. The sophomore is recovering from a fractured left forearm he suffered over the Fourth of July weekend. Smart said that doctors have not cleared Michel to "tackle live," leaving his availability for Saturday unknown.

Georgia's depth chart lists senior Brendan Douglas, who has 715 career rushing yards, or Chubb as the starters for Saturday's game.

"The defense that we're going play against, they're always going to fear the run, knowing that we have someone back there that's going to dominate the run," Godwin said.

As for who will be the first person throwing the ball for the Bulldogs this weekend, that's still unknown. Smart said senior Greyson Lambert and true freshman Jacob Eason are taking the most reps in practice, and the starting job will come down to those two. Junior Brice Ramsey has performed well in practice, Smart said, but the other two have distanced themselves from him of late. Ramsey is also listed as a punter on Georgia's depth chart.

Smart anticipates the quarterback situation sorting itself out before Saturday, but he hasn't ruled out possibly playing both Lambert and Eason against the Tar Heels.

"We'll see how it goes," Smart said. "First thing we have to do is figure out who's taking the first snap before we worry about the next guy coming in. I think it'll reveal itself in the next couple of days, and we'll continue to get those guys reps and get both of those guys ready to play."

Eason, who was the No. 1-rated quarterback in the 2016 recruiting class by ESPN's RecruitingNation, has seen his number of first-team reps increase over the past month and is pegged as the future at the position. Smart made it clear that he isn't opposed to starting the true freshman right out of the gate if he proves to be the Bulldogs' best option.

Said Hawkins-Muckle of Eason: "He's maturing faster than he's had to, but I feel like when he gets in and gets his opportunity, he's going to get the job done."

Smart also announced that suspended defensive lineman Jonathan Ledbetter is still undergoing treatment for substance abuse stemming from two alcohol-related arrests this year, including an arrest on a DUI charge in July. Smart said Ledbetter is practicing and working out with the team.