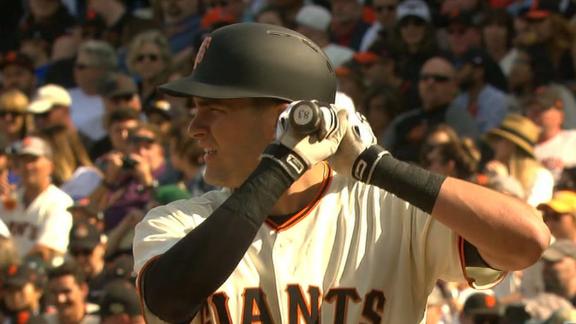 San Francisco Giants infielder Ryder Jones was excited to be making his major league debut against a "big name," so he prepped for New York Mets pitcher Jacob deGrom by getting in a few practice at-bats -- on PlayStation.

Jones, who started Saturday against the Mets after getting called up from Triple-A Sacramento earlier in the day, popped in his "MLB The Show" game on Friday night, with Sacramento teammate Christian Arroyo playing the part of deGrom on the controller.

"I'd want it to be a big name, I think it's more exciting, and it'll help me lock in," Jones told reporters prior to Saturday's game. "It'll be weird because I've only faced him in 'MLB The Show.'"

Jones did about as well as he did in the live game against deGrom. He told reporters he went 0-for-2 on the PlayStation game. He was 0-for-3 with two groundouts and a fly out against deGrom in the Giants' 5-2 loss on Saturday night. He was 0-for-4 in the game.

"We were just messing around," the 23-year-old Jones said of his preparation technique. "I think I got a knock, maybe a popup. Arroyo was manning the deGrom and he threw me some good pitches."

Jones, who will play third base while Eduardo Nunez is on the disabled list, was hitting .299 with 10 home runs in 53 games for Sacramento. He was the Giants' second-round pick in the 2013 draft.

Video game prep doesn't help Jones against deGrom
In anticipation of facing Jacob deGrom, Giants rookie Ryder Jones practiced against a digital deGrom on "MLB The Show." It didn't work out well for Jones as he grounded out in the third inning as part of an 0-for-4 day.
Report a correction or typo
Related topics:
sportsespneduardo nunezjacob degromplaystationmlbsan francisco giantschristian arroyomlb the showryder jones
Copyright © 2021 ESPN Internet Ventures. All rights reserved.
More Videos
From CNN Newsource affiliates
TOP STORIES