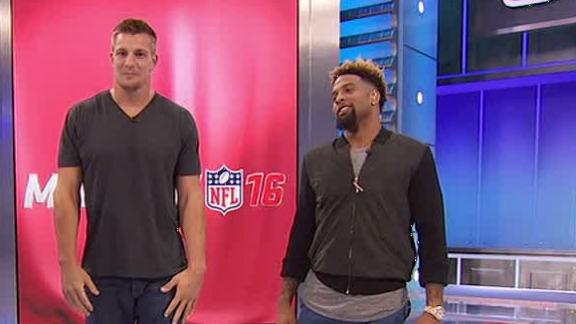 A little more than one year after he was drafted, and with just 12 NFL games on his rsum, New York Giants wide receiver Odell Beckham Jr. has been selected to adorn the cover of EA Sports' "Madden NFL 16" video game.

Beckham missed the first four games of his rookie season with a hamstring injury, but he recovered to catch 91 passes for 1,305 yards and 12 touchdowns over the Giants' final 12 games -- a performance that earned him the NFL Offensive Rookie of the Year award.

At 22, he is the youngest player ever featured on the Madden cover. Vince Young was 24 when he was on the cover of "Madden NFL 08," which was released in August 2007.

Fans sometimes express concern about their favorite player landing on the Madden cover due to the fabled "Madden curse." Several players, including Adrian Peterson, Peyton Hillis and Brett Favre, have struggled in the seasons in which they were on the cover. And in the decade previous to this one, players such as Marshall Faulk, Michael Vick, Ray Lewis, Donovan McNabb and Shaun Alexander suffered serious injuries in their cover seasons.

However, fans who believe in the curse have reason to think Beckham might be immune. He's the third wide receiver to earn the honor, and the previous two had strong seasons when they were on the cover. Arizona's Larry Fitzgerald had 97 catches for 1,092 yards and 13 touchdowns and made the Pro Bowl during the 2009 season after appearing on the cover. And Detroit's Calvin Johnson had his best season in 2012 when he was on the cover, catching 122 passes for a league-record 1,964 receiving yards.