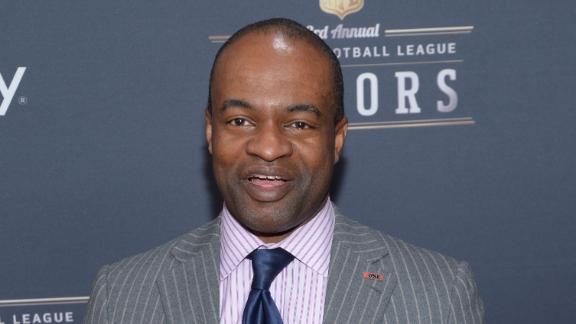 ESPN
By Kevin Seifert
Retired NFL player Sean Gilbert, who wants to replace NFL Players Association chief DeMaurice Smith, released a formal platform Tuesday highlighted by a plan to terminate the league's collective bargaining agreement and including support for an 18-game season as what he called a "carrot" to draw financial concessions elsewhere from owners.

Smith, whose contract is set to expire in 2015, presided over the 2011 CBA that led to a three-year reduction of the league's salary cap. Gilbert said in a conference call that the deal has shifted $2.5 billion to owners from what players would have received under the previous CBA. If the current deal continues to its expiration in 2021, Gilbert projected a total transfer of $10 billion.

Summarizing his pitch to players, Gilbert quoted Ronald Reagan: "Are the players better off today than they were four years ago?"

Smith was asked about his re-election hopes Tuesday on ESPN's "SportsCenter."

"I don't give much thought to people who want this job. I have the pleasure of working for the players of the National Football League. The players decide who their leaders will be," he said. "I look forward to March. I intend to be in this job for as long as the players will have me."

Gilbert said he had proof that owners have violated the CBA's collusion rules, which if true would allow for early termination. He would not reveal details and said he had a "different set of facts" than those raised in a separate NFLPA lawsuit claiming the NFL had a secret salary cap during the uncapped 2010 offseason.

The platform makes 22 points on how Gilbert would proceed if and when he terminates the CBA, including demands for:

• Reducing rookie contracts to three years, with renegotiation allowed after one

• Removing commissioner Roger Goodell from his role as "judge, jury and executioners on matters of players' discipline"

• A contract dissolution benefit that awards players 10 percent of nonguaranteed money lost after early termination of a contract.

Gilbert acknowledged that owners might not be interested in some of his proposals but said: "Shoot for the moon. If you fail, you'll still be among the stars."

However, he predicted he could draw owners to a reasonable bargaining position by conceding an 18-game season, which Smith successfully fought off in the 2011 CBA. NFLPA president Eric Winston has maintained staunch opposition to an expanded regular season, but Gilbert said he has spoken to a number of players about the issue.

"Once I broke down what 18 games meant," he said, "in terms of playing only two preseason games and getting an increase in salary, they understood what I'm trying to implement in terms of growing the game."

Smith said Tuesday he doubted there would be player support for an 18-game season.

"It's not my decision to make," he said. "If someone thinks that it's better for them to play 18 games then I know there's a healthy number of football players playing right now who would say, 'go ahead and you play 18 games.'"

Gilbert played 11 seasons as a defensive lineman in the NFL for the Rams, Redskins, Panthers and Raiders, retiring after the 2003 season. He made the Pro Bowl in 1993 while with the Rams and finished his career with 42.5 sacks.