Good Sport: Local 8th grader making his mark in the world of Karate 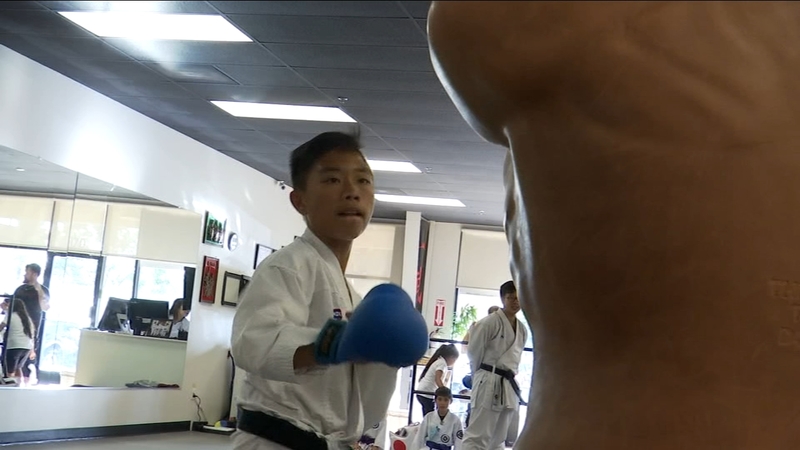 Good Sport: Local 8th grader making his mark in the world of Karate

FRESNO, Calif. (KFSN) -- The Japanese style of karate known as "Kumite" will be a sport in the upcoming 2020 Olympic games.

While locals have to travel to find this style of competition one central valley native is helping to put the sport on the map.

Inside the Bushido Kai Karate studio in north Fresno, Shawn Wong looks like a natural.

The 8th grader at Granite Ridge earned his black belt at the age of 12 and has more or less been in the dojo his whole life.

"He's been doing martial arts-actually he's been on the floor since he was in a carrier at two weeks old," said Shawn's dad, Shannon Wong.

Traveling to karate competitions across the world, it's sometimes hard to explain to his friends just what he does.

"They try to make me do tricks and stuff on them and they ask me to punch them and stuff. Do you do it?? No."

What he has been doing is chasing his karate dreams.

This summer, with his dad Shannon as his sensai, that hard work paid off. He was picked as an alternate for the Pan American Games in Rio De Janerio and when one of the top two couldn't make it, Shawn got the call for Brazil.

"It motivated him to train hard to make sure that he belonged as part of the team. So he trained really hard for a month and a half," said Shawn.

When he finally stepped onto the mat, the reality of representing Team USA set in.

"Very nerve-racking because there are thousands of people watching you and everyone is super loud cheering and you're going against other kids that I've never seen before," Shawn said.

Shawn put aside those nerves and won all of his matches. From alternate to the medal stand-Shawn left Rio as a gold medalist.

"Oh, I was balling. I was crying. Just the thought of all the time and sacrifice that was needed,' says Shawn. "The proverbial hard work pays off. That's what was going through my head."

"That was definitely a dream of mine getting the gold."

Back in Fresno, his dreams have gotten bigger with his style of karate being offered in the 2020 Olympics.

"He's a little young for that but the possibility for 2024. So the sky's the limit in terms of that," said Shannon.