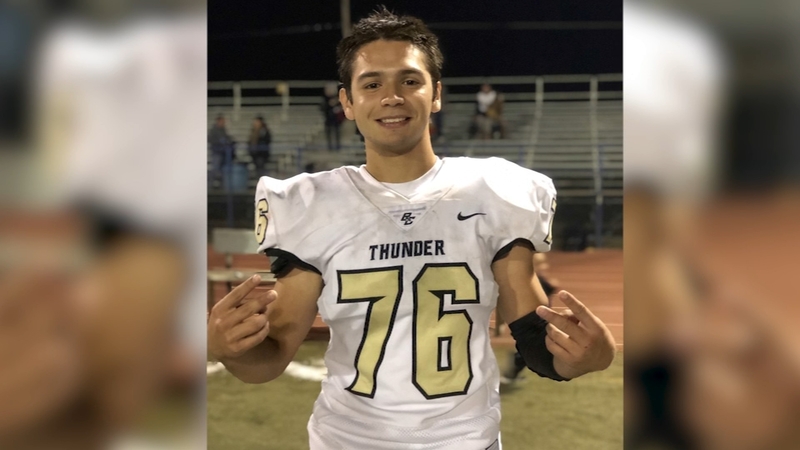 ATWATER, Calif. (KFSN) -- Jakob Barrera may not fit the typical model of an offensive lineman but his hard work on the field has earned him a starting job this season.

"So far, it's been a blast. We're CC Champs, something Buhach hasn't done in nearly ten years," Barrera said.

Jakob started playing for the Thunder in his sophomore year of high school. He wanted to play football when he was younger but couldn't because of his medical history.

"He got injured earlier this year, and so we held him out a game," said head coach Rodger Johnson "He came to me and said 'well coach, my mom is a little bit protective over me because of my history.' I said 'well, what's the deal?'"

"I found out when I was in fourth or fifth grade. When you're little, you don't really understand how something like that can affect someone's life," said Tomas Sandoval.

"I was diagnosed with acute lymphoblastic leukemia from (age) two, and I had treatment when I was six. I was treated at Valley Children's in Madera, and this Christmas Eve, I would have been in remission for 16 years," Jakob told Action News.

"I don't take anything for granted, and I try to do everything to my fullest because I was given a second chance at life," Jakob said. "I'm very appreciative of everyone who's had a positive impact on my life."

"I'm hoping to become an RN because I grew up around doctors and nurses, and they inspired me so much I just want to give back," he said.

The senior has been volunteering at the City of Hope in Los Angeles for ten years and is on the Board of Survivors of Childhood Cancer at Valley Children's Hospital.

"We come together every couple of months, and we bond and try to give back to the community, and our name is the Survive and Thrive Squad," Berrera said. "I can't even name another survivor here around, so it's great to meet people your age or even older than you can take advice from."

The son of an RN and an inspiring football player is tackling one day at a time.