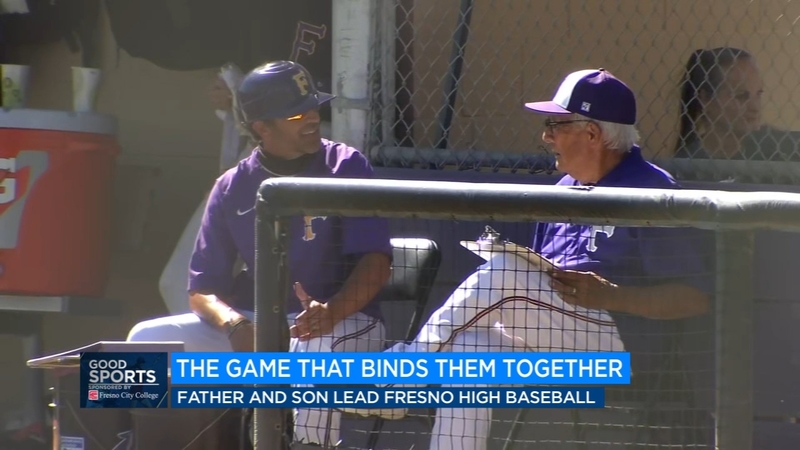 Ken Papi took over the program in 1975 and would go on to win more games than just about anyone else around.

The winning attitude that Ken Papi brought to Fresno High continues to this day with his son Jason now in charge of the Warriors program, but dad is never far away and remains on the coaching staff after stepping down as head skipper almost 10 years ago.

"I try to stay in the background, it's his show and his team," said Ken Papi.

Ken, now 73 years old, still attends every practice and prepares for every game like he always has while the Warriors play in a stadium that bears his name.

The school named the baseball field after him two years ago.

"It's a great honor to coach with him again, but a bigger honor to have my name on the stadium," said Ken Papi.

Jason never played for his dad growing up.

The younger Papi instead starred at Hoover High before going on to play at Fresno City College and later Fresno State.

"He always instilled in me and my sister to go out and work hard and if you work hard good things will take care of themselves. So he wasn't worried about us going to a different school and playing for a different coach. It was tough, it was really hard to be in the opposite dugout of my dad," said Jason Papi.

But they're together now - sharing the same dugout and passion for the game.

The elder Papi who also played at Fresno State, credits some of Jason's baseball mentors for helping his son become the coach he is today.

"Bob Bennet, Mike Rupcich, Ron Scott and he learned from them things that probably he would've never learned from me," said Ken Papi.

The winning tradition continues in 2021 with the Warriors claiming another league title this season despite some of the challenges that go along with leading a program from the inner-city.

The two say they'll continue to coach together as long as they can do it as they look forward to building on the tradition of baseball excellence at Fresno's old high school.

"I feel that if I'm half the coach that he was I'm going to be a pretty good damn coach. I work hard every day to make this program better," said Jason Papi.