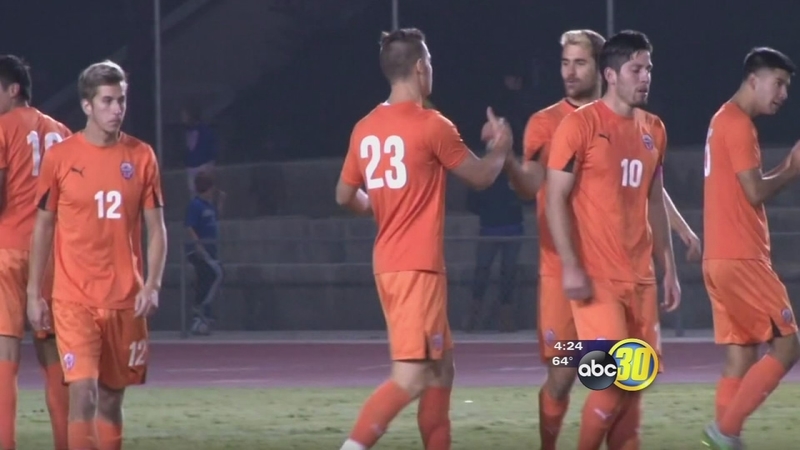 FRESNO, Calif. (KFSN) -- Since the late 1970's Jaime Ramirez has bled Sunbirds blue and orange, first as a record-setting player at Fresno Pacific University and then from the sidelines.

"You are asking me when I first got here as a student?" jokes Ramirez who became an assistant coach in 1982 and then took over as the program's head coach in 1991.

Under his guidance, the Fresno Pacific soccer program has reached unprecedented heights and a career milestone in wins. "We were very aware of the significance of the game, we knew it was (professor's) 300th victory, Pac West champion on the line a chance to get into the national tournament," said midfielder Renato Bustamante.

While coach Ramirez's 300th win and Pac West title came on the same night, there was more good news to come for the FPU soccer program. "It was a great experience because we were able to go in the room all by ourselves and to see our names picked for a tournament that, kind of, elevates you to the next level because we all want to be at the dance, and we are at the dance this year," said FPU defender Dallas Whitlow.

The selection into the NCAA postseason marks a school first for any athletic program at FPU in its first season as active members of Division II. "I'm looking at the other five teams in our region, we know them, we know who they are, we know their history, we've played against them before and I think now we are just given the opportunity to prove that we belong," said Ramirez.

The Sunbirds prove they belong on the field with wins, but coach Ramirez's greatest victory is the impact he has on his players. "The biggest thing is Jaime loves us, he really cares for us as players. We feel that and we transmit that onto the field and into each other and that relationship he has with us is almost a father figure to us, that means a lot and inspires us to play better," said Whitlow.