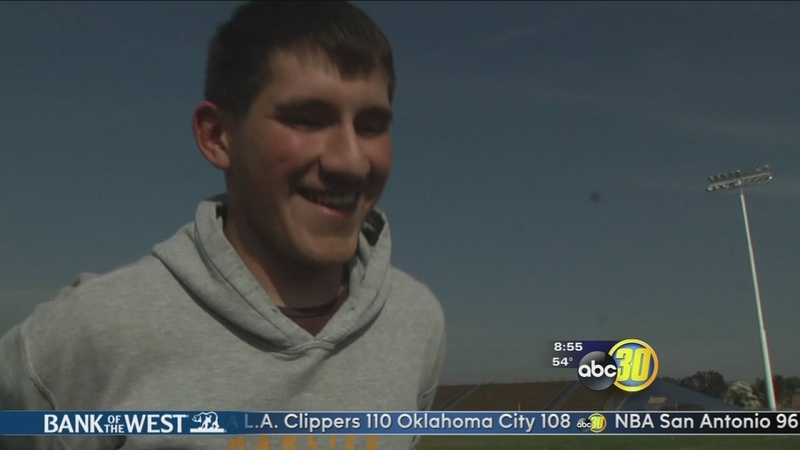 PARLIER, Calif. (KFSN) -- What happens when a touchdown is more than just 6 points? For Parlier's Justo Bustos his touchdown against Riverdale in the regular season finale his touchdown instantly went viral.

Bustos who has cerebral palsy suited up for the first time ever and with the help of the crowd and his teammates, Bustos had his chance to shine in the spotlight.

"All I saw was the end zone, I was just aiming to make a touchdown. I've been waiting 4 years for that, flashbacking how I dove into the end zone it was amazing seeing that kind of sportsmanship," said Bustos.

Sportsmanship is where this story begins. Back in 2013, then Parlier head coach Joe Reyes and Riverdale's Bryan Close agreed to honor Riverdale team manager and special education student Anthony Vallejo on senior night, where he suited up for the first time and scored a touchdown.

"My team honored me to play on the field, my jersey #71 that day when I made that touchdown, was the best moment of my life," said Vallejo.

"It was just an honor when he offered that suggestion. I told him I knew about Bustos on the sideline, I didn't know what grade he was in. He asked, all we asked you honor our wish when Bustos became a senior," added Coach Close.

The second half of that promise was realized Bustos crossed the goal line.

"So I was like I'm going for that end zone. I'm going for it as I reached the one that's where I leaped. Brings me joy because since Friday night I'm going to remember that every time I look at the field, I'm going to go, I did it," said Bustos.