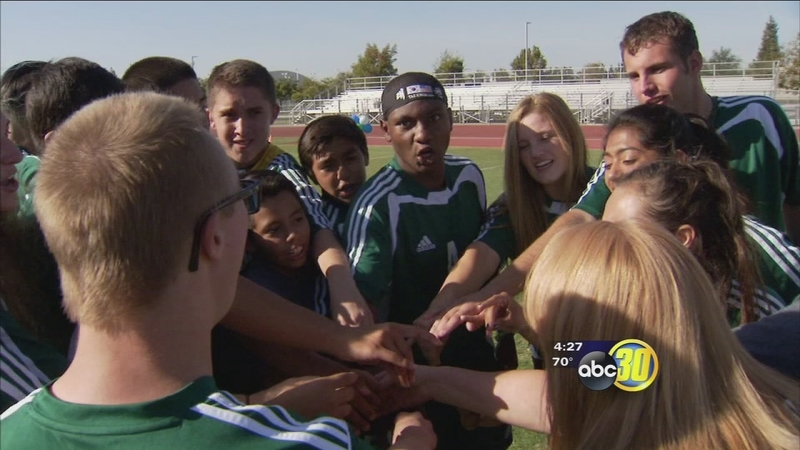 FRESNO, Calif. (KFSN) -- Clovis East High School recently hosted its Senior Day that featured an atmosphere typically experienced on Friday nights in the Central Valley. But we're not talking about football. Teams from the first-ever TRAC Unified Soccer League wrapped up their season this week.

The hometown Timberwolves were fired up to host their rivals. The TRAC Unified Soccer League is made up of both general ed and special ed students. It's 5-on-5 with six special ed athletes on the field at all times.

"It gives special ed kids a chance to wear a school uniform, play for their school and do all this amazing stuff," head coach Cindy Contreras said.

Affion Smith is one of the stars of the team. He grew up loving the sport of soccer as a kid but as Affion grew older, the opportunities to play competitive soccer became non-existent.

"Also, I feel in my heart, I feel emotional," he said. "I wanted to quit soccer, but I don't want to quit soccer. I want to do this forever. I got all my friends have my back. That's what I have."

What Affion and other special ed students have is inclusion. Where else are you going to find the football, baseball and softball team cheering you on in support like you will at Clovis East or any of the other TRAC schools and it's not just on the field. Affion ended up on the homecoming court after he was voted on by his peers.

"Affion being named as a homecoming finalist was pretty amazing," Contreras said. "The entire school cheering his name. He's a student that had been bullied in the past because of his disability and he's a superstar here."

"He's the reason I smile every day," Clovis East senior Peyton Kwalwasser said. "He never has anything mean to say, he's so positive. And he just makes me joyful."

Kwalwasser is Affion's teammate and a member of the Girls Varsity Team. She's one of the invited athletes to kick start this new league at Clovis Unified.

"It's so fun, the kids gets so excited when we score," Kwalwasser said. "It's like some of our people even do back flips, cartwheels. You never know what to expect. It's unpredictable, but it's so much fun."

With the success of the inaugural TRAC Unified Soccer League, there will be a similar deal for basketball and that will start sometime in March.