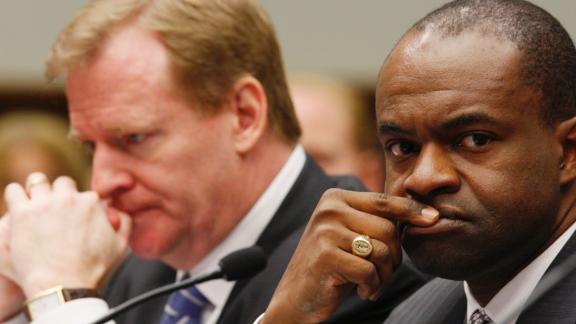 Smith, speaking to ESPN's Sal Paolantonio, criticized Goodell and the league for a double standard when it comes to punishments, particularly in the case of Indianapolis Colts owner Jim Irsay, who has yet to be disciplined after he was arrested and charged with two misdemeanor offenses in March.

"The commissioner understands that there is a significant credibility gap that exists in the National Football League," Smith said. "What troubles our players is the speed and the deliberateness of the punishment that they have seen in the past when it comes to a player. There isn't the same speed or deliberate action when it comes to an owner, and that's a problem."

Players have been critical of Goodell for the delay in judgment against Irsay, who was arrested March 16 for allegedly operating a vehicle while intoxicated and while in the possession of $29,000 and prescription drugs that weren't in his name, according to police reports.

Goodell, speaking in Foxboro, Mass., where he was attending a football safety clinic for mothers, a program aimed at furthering safer play at all levels of the game, said the decision-making process about potential discipline for Irsay in the wake of official charges is ongoing.

"As I said before, the personal conduct policy applies to commissioners, owners, players, coaches," Goodell said. "It applies to all of us. We all have a responsibility to do things the right way. Yes, it is ongoing."

"I think you know there are several players that we haven't taken any action on either," Goodell said. "We like to get the facts, we like to be thorough, and we like to understand them. Charges were just filed last week. So I don't believe there is a credibility gap.

"Judge us when we make our final determination, which (we) undoubtedly will," Goodell added. "So will everybody else. That's fair. But don't make judgments until we have had an opportunity to do what's in the best interests of everyone, which is get the facts. Everybody wants process. DeMaurice Smith talks about process all the time. The process is important."

Smith, meanwhile, was equally as pointed when it came to the topic of HGH testing and why it's been held up to this point.

"It's being held up because one man wants to keep the power to be the judge, jury and executioner. That's not right."

New NFLPA president Eric Winston said this month that the NFL's plan for HGH testing is on hold because players don't agree with the league's stipulation that Goodell be the final arbiter in particular disputes around the testing process or the results. Smith said this month that both sides have agreed to everything surrounding the testing process. The NFLPA, however, would prefer neutral arbitration over Goodell.

Smith was also asked Thursday about the possible expansion of the playoff field from 12 to 14 teams and said Goodell and league officials must do their due diligence for that to happen.

"If there will be an expansion of the playoffs, there will be a proposal by the National Football League pursuant to the collective bargaining agreement," Smith said. "That is a change of working conditions. Changes of working conditions must be negotiated with this union. And I haven't seen a proposal from the National Football League and I know that is a necessary precondition."

Information from ESPN.com's Mike Reiss and The Associated Press was used in this report.