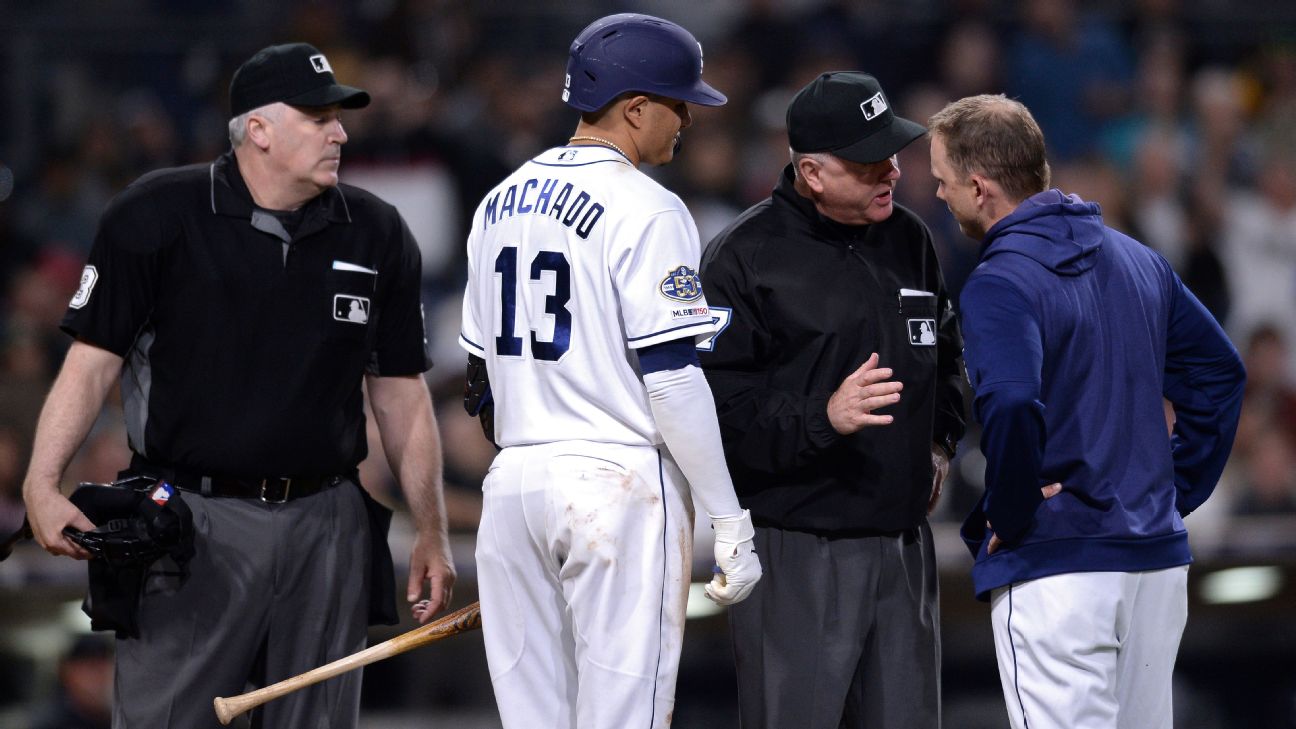 SAN DIEGO -- Manny Machado was called out on batter's interference after dropping his bat near Arizona DiamondbackscatcherJohn Ryan Murphy as Murphy tried to catch a popup, a disputed decision that led to Padresmanager Andy Green's ejection from Tuesday night's game.

Machado appeared to brush Murphy as he broke out of the box while Murphy moved to catch a popup about 10 feet down the first-base line in the sixth inning. As he ran by, Machado tossed his bat toward Murphy's feet, though the bat did not touch Murphy. The catcher dropped the pop foul, but plate umpire Bill Welke signaled for interference and called Machado out.

Green came out to argue with Welke and was ejected. Green slammed his cap to the ground.

The Diamondbacks went on to win 8-5.

Asked if he made contact, Machado said: "Not that I was aware of. Honestly, I didn't even know what was going on until Andy came out there and started arguing. I had to ask him, was I out, was I safe, and he was like, 'Uh, I don't know.' At that point, I went back to the batter's box."

"I hit the fly ball, looked up, saw it, put my head down and went to go run," Machado added. "I don't even think I touched him. He even said no. Things happen on the ballfield. I mean as a player, we don't feel, I don't think I hit him. Maybe we'll see the replay and maybe I did. Who knows? I don't know. I didn't see the replay yet. As I was aware of, I don't think I touched him though."

Machado has been criticized in the past for his baseball ethics. He was called a "dirty player" by National League MVP Christian Yelich during last year's postseason, after Machado stepped onMilwaukee Brewersfirst baseman Jesus Aguilar's leg while running out a groundout.

Green said he had no idea how Welke interpreted the play.

"If you put it in super slo-mo, you might be able to see a heel-click,'' Green said. "If he saw that, that's really, really, really impressive. A graze of the heel."

Welke told a pool reporter that it doesn't matter if there's contact and that Machado was called out for "what was going on at home plate."

Fans booed Welke for the rest of the game.

"On that play, my mind was obviously on catching the ball, so I'd be lying if I said that I felt anything out of the norm,'' Murphy said. "Watching the video, I can see that maybe we did brush up against each other. I don't know if my foot hit the bat or not. In the moment, it didn't feel like it affected being able to catch the ball.''